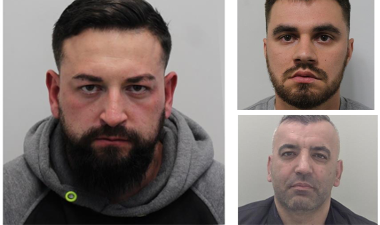 Artem Kuts, 39, of the Isle of Dogs, and Oliver Mark, 40, of Stratford, were among four people arrested as part of a National Crime Agency investigation into the supply of firearms.

They were found guilty on Friday 28 May following a seven-day trial at Southwark Crown Court.

A third man, Alexander Georgiev (also known as Ernis Piranej), 26, of no fixed abode, who pleaded guilty at an earlier hearing, was seen getting in and out of the same car several times carrying the brown paper bag. He later got into a blue BMW empty handed.

Georgiev was arrested for conspiring to supply a firearm minutes later, as he attempted to flee in the blue car. A fourth person in that car was initially arrested for the same offence but later released. No further action was taken against him.

Police then searched Kuts’ home on Claire Place and found two more guns and 14 rounds of ammunition of the same type, which had been hidden in the garden. They had been packaged heavily and wedged in the corner between the wall and a garden storage unit.

“The seriousness of gun crime cannot be underestimated. Had we not intercepted these weapons they would have been used to kill, threaten and intimidate others.

“Organised criminals like Kuts, Mark and  Georgiev perpetuate violent crime and are only motivated by financial gain.

“The NCA works tirelessly to stop criminals getting their hands on firearms, and to pursue those who use them to unleash violence and fear in our communities.”

All three are due to be sentenced on 17 June at Southwark Crown Court.