The new record high employment rate is at 76.3%, with the unemployment rate not lower since 1974. Wage growth has outpaced inflation for the 22nd consecutive month.

The number in work has hit yet another record high and the unemployment rate remains at its lowest level since the mid-1970s as Britain’s jobs market continues to flourish, new figures released yesterday (Tuesday 21 January 2020) show.

All regions throughout the UK are benefiting from an upturn in employment since 2010. The number in work climbs to a record high in the North West to 3.55 million.

And, with weekly pay still rising, outpacing inflation for a 22nd month in a row, workers nationwide can expect their money to go that bit further.

Contributing to the plummet in overall unemployment, women continue to benefit most from the thriving UK jobs market – with 317,000 more entering work in the last year alone to reach a record high. 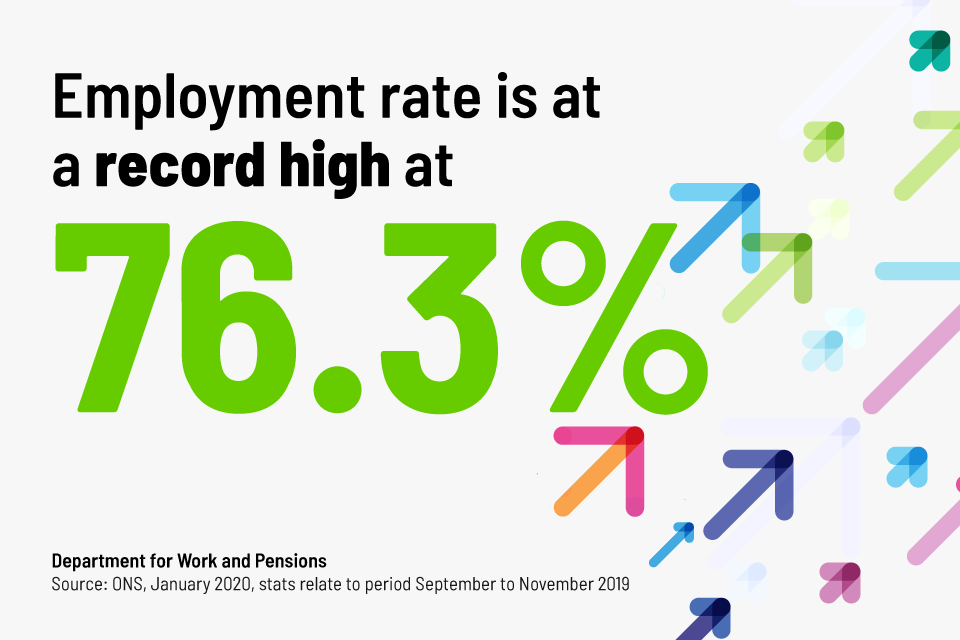 Today’s figures also show an uplift in people taking up quality careers offering real progression – as 3.1 million more people are in higher skilled work since 2010 – making up over 80% of the employment growth.

These figures show not only more people in work than ever before, but it’s also pleasing to see alongside this a rise in those working in higher skilled roles. It means at the dawn of the decade the opportunities to progress in work are out there, with people already benefiting from another month of rising wages.

This, coupled with business confidence turning a corner, is paving the way for an even stronger jobs market in 2020.

And with unemployment at its lowest since the 1970s, our jobcentres go beyond getting people into work – they are about community and progression. Reaching out to more people, and supporting those in work to get ahead.

The jobs frontline has now been boosted by 10,000 additional Work Coaches to help Britons back into work.

Nearly two million Brits could be supported back into work through innovative Plan for Jobs employment schemes delivered by the DWP.

Digital job surgeries launched to help 160,000 Brits get back into work

More than 150,000 jobseekers across Great Britain will benefit from new employment support, helping them build their interview skills, find local vacancies and quickly get back into work.

A speech delivered by the Minister for Pensions to the 2021 Professional Pensions Investment Conference about climate-related risks.

Kickstart moves up a gear with over 120,000 jobs created so far and government making it even simpler for employers to join

More than 120,000 jobs for 16 to 24 year olds have now been created through the government’s flagship Kickstart Scheme, as ministers have urged more employers to get involved.

A ground-breaking Local Partnership Agreement has been signed by the Department for Work and Pensions and Her Majesty’s Prison & Probation Service (HMPPS).

A decade of UK Government support leads to more than 13,000 new businesses launched by jobseekers in Scotland

On 4 January 2021, the Prime Minister announced that the government will be introducing new national COVID-19 measures in England to protect the NHS and save lives.