The recent near-simultaneous missile tests conducted by the governments of South and North Korea are illustrative of an emergent dynamic in which a growing South Korean counterforce capability is incentivising North Korean efforts to achieve a more diversified missile arsenal that can be rapidly dispersed.

In the past week, North Korea launched a KN-23 ballistic missile from a rail-based launcher and tested what it claimed was a ‘strategic’ cruise missile with a 1500 km range. South Korea, meanwhile, tested a Hyunmoo 4-4 submarine-launched ballistic missile from the submarine Dosan Ahn Chang-ho. These two events reflect a developing dynamic in which a nascent South Korean conventional counterforce capability, coupled with political moves that raise the possibility of South Korea assuming wartime operational control in a conflict on the peninsula, encourages adaptations by the North to avoid the risk of pre-emption in a crisis.

Discussing the ramifications of the KN-23 launch, North Korea’s Marshal Pak Jong Chon stressed the potential for coordinated ‘dispersive firing’ against targets from positions that could exploit North Korea’s geography. This is a reference to the potential for rail-based missiles to be more rapidly relocated than their road-based counterparts, and the protection that railway tunnels through North Korea’s mountainous terrain provide for the launchers.

RUSI researchers geolocated the firing location of the KN-23 missile to a rail line in central Yangdok County, a railway deep inside North Korea’s operational missile beltway, which is dotted with dozens of tunnels as it transits through mountainous terrain. Prebuilt tunnels such as these can double as perfect sites for North Korea’s rail-mobile missiles to scoot-and-shoot, complicating targeting efforts by its adversaries.

Figure 1: Firing Position of the KN-23 Confirmed by RUSI Researchers 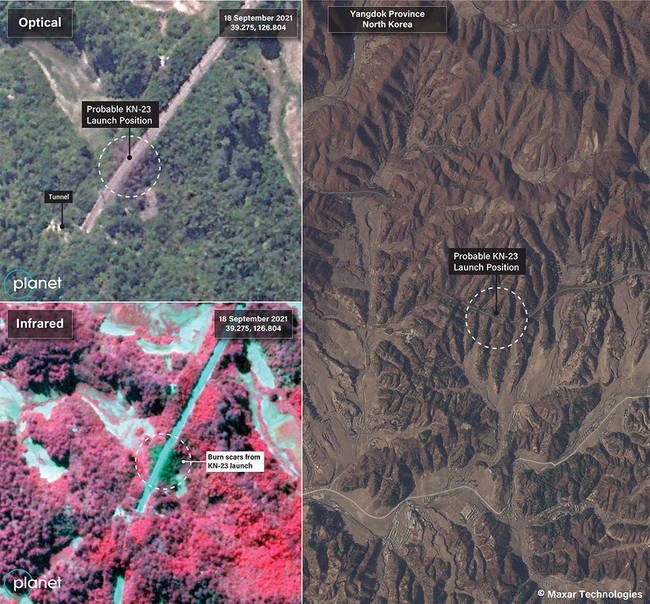 Some analysts have speculated that the launch of the KN-23, a short-range ballistic missile (SRBM), obscures the eventual role of rail-based launchers, which is to transport North Korea’s smaller force of liquid-fuelled Hwasong-16 ICBMs. The guiding assumption here is that the Hwasong-16 could be held at readiness on trains already fuelled and ready for launch.

While by no means unreasonable, this prediction could perhaps be confounded by several factors. Firstly, the density of North Korea’s railway network is relatively limited in the northern portions of the country, where its long-range strategic missile bases are located. If the North continues with its practice of holding strategic weapons in the country’s northern reaches, this could simplify the task of identifying and eliminating North Korean ICBMs, given the limited number of rail lines. By contrast, deployment of the Hwasong-16 missiles on the denser central portions of the North Korean railway network would leave them within range of a number of South Korean and Western strike assets, including ground-based conventional missiles and aircraft, which could target them more responsively given shorter sortie distances. Secondly, the liquid propellants sometimes used in ICBMs are highly sensitive to the vibrations of locomotives. This was the reason why the USSR rejected liquid-fuelled models for its rail-based SS-24 ICBM, and was among the reasons why China – during a period of relative nuclear weakness in the 1970s – avoided pursuing rail mobility for its liquid-fuelled DF-4 missile. Rather than being a cover for an ulterior aim, the test of the solid-fuelled short-range KN-23 missile is thus likely a response to the potential South Korean threat to North Korea’s short- and medium-range arsenals. 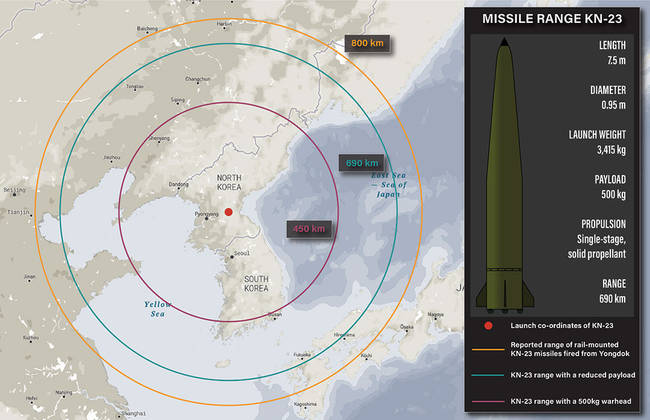 Over the past decade, South Korea has pursued a conventional counterforce posture that could enable it to hold a significant portion of North Korea’s missile arsenal at risk. This posture includes the Hyunmoo-2 and Hyunmoo-4 ballistic missiles, both of which are capable of eliminating hardened and deeply buried targets such as command nodes and underground missile facilities. In addition, South Korea can target exposed North Korean short-range missiles with the US-made ATACMS and its South Korean variant, along with air-launched munitions. Finally, investments in capabilities such as the Global Hawk UAV and satellite-based surveillance will enhance South Korean targeting capabilities.

There is no guarantee that the South can eliminate all of North Korea’s missiles – estimates suggest that the country would need 1,700 cruise and ballistic missiles to eliminate all of North Korea’s artillery and missile systems. A smaller long-range strike capability could, however, potentially more selectively target the short- and medium-range missiles that directly threaten South Korea with WMDs, while leaving the elimination of artillery to airstrikes and ground-based artillery and armour – thus removing an important step from the North’s escalation ladder.

North Korea’s missile force operates from an estimated 65 missile bases, with short- and medium-range missiles held in underground facilities in what North Korean planners call the tactical and operational zones between 90 and 150 km from the 38th parallel demilitarised zone (DMZ). Upon being alerted, the missiles proceed from their shelters to servicing points and then to pre-designated launch points relatively close to their bases, where – if liquid-fuelled – they take roughly 30 minutes to prepare for launch. Should we see the emergence of a robust South Korean capability to strike leadership and command centres in order to delay the communication of orders to put systems on alert, as well as a capability to eliminate hardened buried sites in the tactical and operational zones, the leadership of the South may be incentivised to pre-emptively eliminate the portions of North Korea’s nuclear arsenal which directly menace its population. Any remaining North Korean missiles could be intercepted by the South’s missile defence system, which is based around the Israeli Green Pine radar, Aegis-equipped destroyers and the US THAAD system. In this scenario, the leadership of the North, even if it eventually re-established contact with its forces and retained its ICBMs, would lack the short- and medium-range missiles necessary to threaten South Korean targets.

To be sure, there are a number of unknowns in this picture. In the event of a conflict, the elimination of missiles would need to occur in tandem with the neutralisation of the country's artillery north of the DMZ. This is unlikely in the near term. Nonetheless, the emergent South Korean counterforce posture is a realistic long-term threat to the North’s potential for nuclear blackmail on the peninsula, and could become more significant still should the South ever nuclearise.

It is within this context that we should view the North Korean fielding of the solid-fuelled KN-23 and the subsequent adaptation of the missile for rail mobility. A solid-fuelled missile such as the KN-23 can be safely stored at readiness on a train and can be moved over large distances by rail at higher speeds than a road-mobile variant. These systems are not without their own vulnerabilities – notably that their movement is limited to the rail network which can be bombed. However, these systems are relatively non-descript and can be moved around the country more rapidly than road-based launchers that will likely have to fire from pre-prepared positions close to their bases after being put on alert – a function of the limited distances that road-based systems can cover in a short time. The speed at which the missile can be moved, coupled with the relatively inconspicuous nature of its launcher, can allow for rapid dispersion relatively early in a crisis. Further, the regular movement of these systems between tunnels around the North Korean rail network in a manner comparable – if not quite identical – to the US-planned MX racetrack model could add an additional level of complexity to South Korean targeting. Finally, the characteristics of the KN-23 itself are of note. The missile, likely based on the Russian Iskander quasi-ballistic missile, can fly at altitudes of 40 km – remaining under the 50 km optimal intercept altitude required for systems such as THAAD and Aegis to be effective, while remaining above the 30 km intercept altitude of air-defence systems. This means that in the event of a South Korean first strike, even a small number of surviving KN-23 missiles could breach South Korean missile defences.

The picture that emerges from this dynamic is a mixed one. While the ability of the North to credibly threaten its southern neighbour can only be regretted, the presence of a survivable mobile short-range system could in certain ways reinforce stability on the peninsula. North Korean leaders in possession of this system would, for example, have fewer reasons to fear conventional pre-emption in the future, and thus would have limited incentives to put a large portion of their missile systems on alert early in any future crisis – potentially preventing a deadly cycle of miscalculations on the peninsula.

The views expressed in this Commentary are the authors’, and do not represent those of RUSI or any other institution.

Have an idea for a Commentary you’d like to write for us? Send a short pitch to commentaries@rusi.org and we’ll get back to you if it fits into our research interests. Full guidelines for contributors can be found here.

Nearly seven years since fighting began in Yemen, the battle for control of two key governorates is leading regional powers to step up their direct and indirect involvement in the conflict.

Trafalgar: The Legacy of George Anson

The Royal Navy has an unhealthy obsession with Nelson and Trafalgar. If it must idolise a Georgian hero, then perhaps it should look to the father of the modern navy: Lord George Anson.

The Hazards of Expanding the Five Eyes

While there are political attractions to expanding the Five Eyes in the face of China’s increasing assertiveness, the risks involved mean it is more likely that intelligence ties will be enhanced outside the framework of the alliance.

China’s incursions are steadily eroding Taiwan’s position in the air and sea around the island.

Aligning with the Non-Aligned: Serbia Follows in the Footsteps of Old Yugoslavia

As Serbia faces numerous challenges in its foreign policy, it is re-engaging with old Cold War partners in the Non-Aligned Movement.

AQ Khan’s legacy may not be in the nuclear kit he sold, but rather in how he sold it. His departure is a reminder of the limited progress made in countering proliferation networks.

Shape Up or Ship Out: Time for Wider Reform of the UK AML Supervisory Regime

The third annual report of the UK’s ‘supervisor of supervisors’ raises questions about the need for more fundamental reforms of the UK’s AML supervision regime.

NATO's Weakness is Not Good News for Europe. We Need a Strong Transatlantic Link

NATO has its problems, and the emergence of a European defence identity is an imperative. But the severing of transatlantic links is never the answer.

Will China Replace the US in Afghanistan?

Despite heightened expectations, significant Chinese assistance to Afghanistan is unlikely to materialise soon.