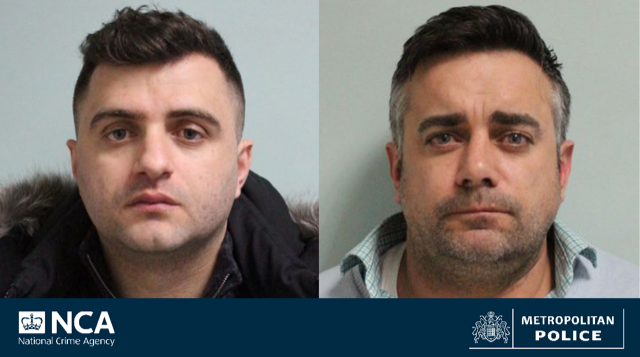 Michael Middleton, 41, and Ervis Hoxha, 31, were arrested by OCP officers on 12 March 2020 following the handover of 7kg of cocaine in Heston, West London.

Earlier that evening Middleton had driven back to the UK via the Eurotunnel service from Calais to Folkstone. He then drove to Heston and parked up on Westbrook Road, before getting out the car with a rucksack filled with cocaine.

OCP officers watched as Middleton got into the passenger seat of Hoxha’s car then moved in to arrest the two men.

As well as the drugs, officers seized almost £7,000 in cash from Hoxha’s car.

When searching his home in Tooting, they found a further £1,500 in cash and additional evidence of his drug dealing activities, including plastic wraps, a drug press, scales and a heat sealing machine.

Forensic examination of Hoxha and Middleton’s phones found that both were encrypted devices, which are commonly used to undertake criminal activity.

Both men admitted to supplying class A drugs. Another man, who was in Middleton’s car on the night of the arrests, was fined after pleading guilty to possession of a class A drug.

“Drugs, cash and violence are a vicious cycle that all go hand-in-hand. The OCP is acting swiftly to arrest criminals and break the link between all the three factors.

“The NCA and Met will continue to work together to stop organised criminals profiting on the supply of drugs, which in turn will help reduce violent crime across London and the UK.”

The Organised Crime Partnership (formerly the Middle Market Drugs Partnership) has been in operation for 15 years and is comprised of equal numbers of specialist Metropolitan Police Detectives and NCA Special Operations officers.

The team works to stop the flow of firearms and drugs to the criminal market in London, target criminals that impact on London, as well as disrupting those that make huge profits from this illegal activity.

A Turkish lorry driver has been jailed for two-and-a-half years after pleading guilty to attempting to smuggle 17 migrants out of the UK in the back of his lorry.