A joint British and French satellite dedicated to monitoring atmospheric carbon dioxide, the main greenhouse gas responsible for climate change, has arrived in the UK where the assembly, integration and testing will be completed.

Called MicroCarb, the mission between the UK Space Agency and the French space agency, CNES, will be the first European satellite dedicated to measuring atmospheric CO2 from all around the world – the main greenhouse gas caused by human activity. The satellite will be a timely contribution to tracking progress with reducing greenhouse gas emissions as required by the Paris Agreement.

Due to launch in 2024 the instrument was built by Airbus France, with pre-flight calibration and validation conducted by the National Physical Laboratory (NPL) in Teddington, before being shipped to the UK where Thales Alenia Space will complete the satellite assembly, integration and testing at the Science and Technology Facility Council’s RAL Space test facilities on the Harwell Space Cluster, in Oxfordshire. 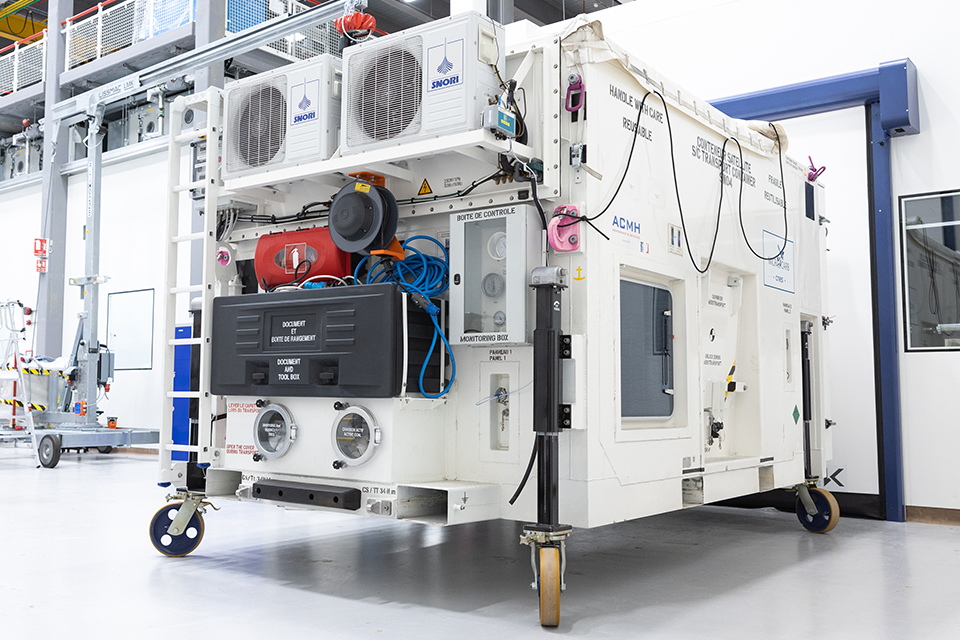 MicroCarb’s data will contribute to global efforts to measure how much carbon is being emitted by natural processes and how much by human activities. This information will help inform decisions on tackling climate change.

The UK Space Agency has invested £13.9 million in the mission.

Over half of the critical measurements on climate change rely on satellite data and the information from MicroCarb will be hugely important. Having more accurate knowledge of how much carbon the world’s forests and oceans absorb will provide the reliable information needed to take decisions on tackling climate change.

It is an exciting moment to see the MicroCarb satellite arrive in the UK. This mission shows what can be achieved when we collaborate with international partners like CNES, bringing the best of our skills and expertise together.

Achieving Net Zero is one of the most pressing challenges we currently face, and a vital part in reaching our collective goal is to develop systems that can accurately and reliably monitor carbon emissions.

I’m incredibly proud that STFC RAL Space has played such an important role in the development of MicroCarb. The pointing and calibration system that we’ve developed for this mission will enable scientists to analyse the carbon cycle in new levels of fine detail, giving us a fuller and clearer understanding of the processes driving climate change. 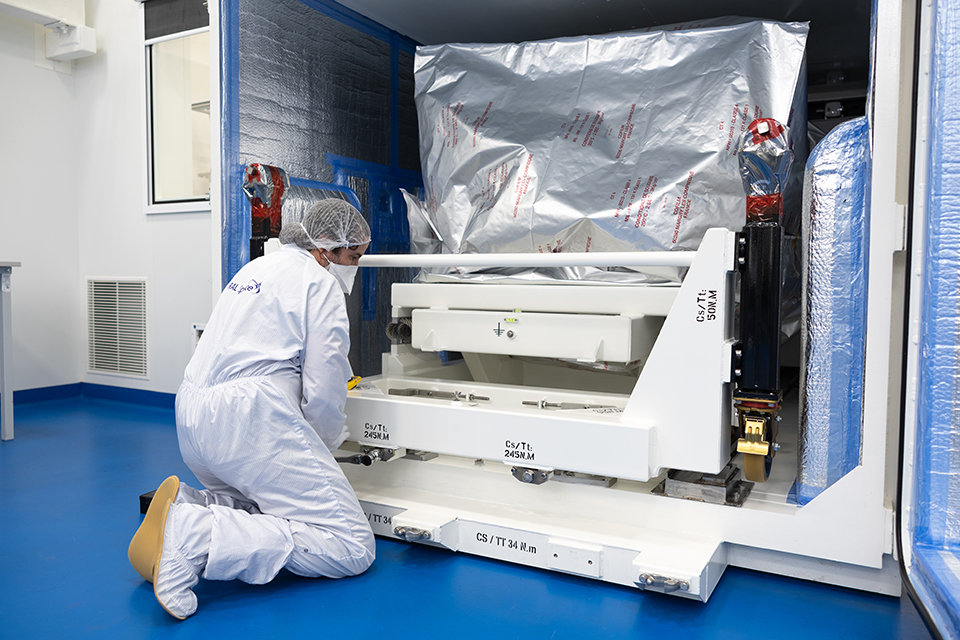 With the climate crisis at the top of the world agenda, I am proud of the fact that Thales Alenia Space is at the heart of this important collaborative mission between the space agencies of France and the UK. The fact that it will be the first satellite our Assembly, Integration and Test team in the UK has fully assembled and integrated only adds to that pride.

We all learned from an early age the effect of carbon dioxide on global warming but the fact that MicroCarb will be able to measure the effect of cities on the production of CO2 will bring a significant step forward in the battle to manage the human impact on our environment.

The NPL is providing critical pre-launch calibration and validation hardware together with metrological input into the product quality. This calibration is key to the success of the mission and precision and trust in the GHG data the satellite will send back.

To make informed decisions about climate change we need to have confidence in the systems and data we use to do so. I am delighted that NPL has played such a significant role in the early stages of the MicroCarb mission, leading on the calibration and validation with our state-of-the-art facilities, and that we will continue to be involved in the mission as it progresses by using our measurement capability to input into the downstream data.

Experts from the National Centre for Earth Observation (NCEO), at the universities of Leicester and Edinburgh, will help develop the core data products and translate observations of atmospheric CO2 into maps that show carbon sources and sinks.

MicroCarb will monitor Earth’s atmospheric CO2 from space with extreme precision and detect the changes associated with surface emissions and uptake across the world from our cities, forests and oceans. An important feature of the satellite is its special city-scanning observing mode that will allow us to map the CO2 distribution across urban areas, which are responsible for the majority of global emissions, and support efforts to reduce emissions.

Data from MicroCarb will play a crucial role in extending our current ability to verify reductions in global and national emissions of CO2 in response to the demands of the Paris Agreement.

Cities are home to half of the world’s population and are therefore at the forefront of the global challenge to reduce emissions of GHGs. The city-scan observing mode of MicroCarb, which can map out atmospheric CO2 over cities the size of London and Paris, will provide new information to help cities implement strategies that support sustainable urban development. 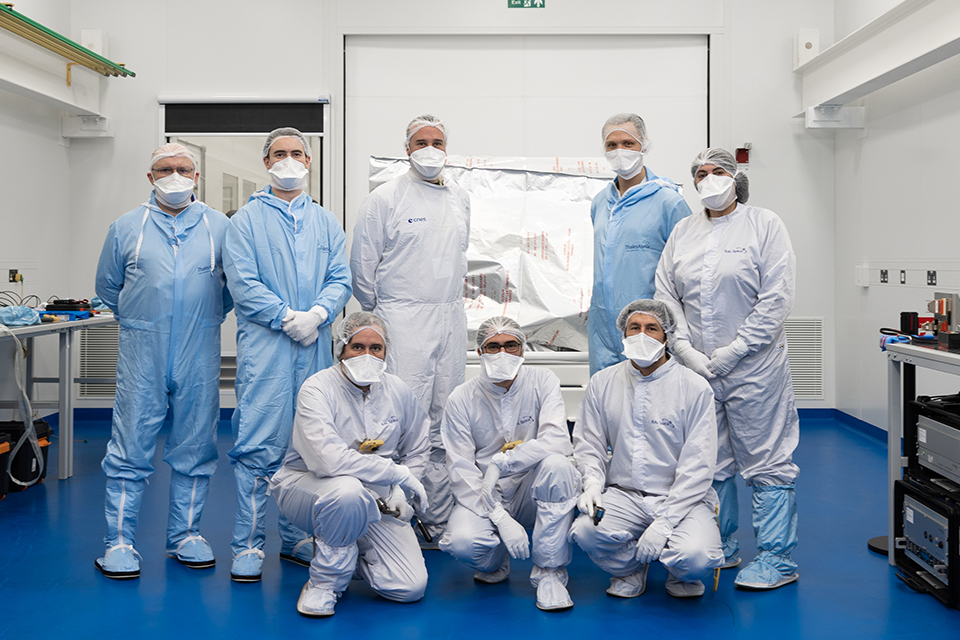 Thales Alenia Space in the UK is responsible for the Platform Assembly, Integration and Test (AIT), Satellite AIT and Launch Preparation.

Experts at the National Physical Laboratory (NPL) are providing critical pre-launch calibration and validation hardware together with applying the metrological principles to the measured CO2 concentrations, fluxes and sources and sinks attribution through understanding how the instrument and observation aspects contribute to the data use. This calibration and validation work is key to the success of the mission and precision and trust in the GHG data the satellite will send back.

STFC RAL Space have designed and built the Pointing and Calibration System (PCS) for MicroCarb, feeding the light from the Earth or from calibration sources into the instrument. The PCS will allow the instrument to point at specific targets on the ground, such as cities, to take local measurements of carbon dioxide emissions from urban areas.

GMV is responsible for designing, implementing and quality assuring the algorithms and operational processors for a number of the carbon dioxide data products. The operational processors convert the raw science data generated by the sensing instrument on the satellite into values that can then be used to form climate datasets.

GMV is also responsible for ensuring the operational processors for this mission can integrate with the processing infrastructure of mission partner, the French Space Agency (CNES) as well as with those of the European Organisation for the Exploitation of Meteorological Satellites (EUMETSAT).

Drawing on world-leading expertise from the National Centre for Earth Observation at the universities of Edinburgh (Professor Paul Palmer) and Leicester (Dr. Robert Parker), the MicroCarb Science team will translate atmospheric carbon dioxide observation into maps that show carbon emissions and uptake (carbon sources and sinks). The work will fundamentally improve current understanding of the carbon cycle and help pave the way towards a measurement verification system to monitor carbon emissions from human activities and natural processes.

The UK experts are part of a greenhouse gas team at the National Centre for Earth Observation, a UKRI-NERC research centre which provides the UK with world-leading, national capability in Earth Observation data for climate and environmental change; Professor Paul Palmer is the UK and NCEO Lead.

The TUC has today (Monday) welcomed an open letter penned by 50 civil liberties organisations and rights groups slamming the government’s new anti-strikes bill as an attack on the fundamental right to strike.

“UNICEF is alarmed by the latest escalation of violence that has left many children dead and injured in the State of Palestine and Israel. All children are entitled to special protection under international human rights law, and all their rights including the right to life and protection must be upheld at all times.

Matthew Taylor responds to the publication of the Department of Health and Social Care's urgent and emergency care recovery plan.

City pay including bonuses (pay in the financial services and insurance sector), has risen more than three times faster than nurses' pay (3.2 times) since 2008, according to new TUC analysis published today (Friday).

With some of us still receiving festive cards well into the New Year, Citizens Advice reveals that an estimated 31 million people (60% of UK adults) were hit by letter delays this Christmas.

Cllr Peter Marland, Chair of the Local Government Association’s Resources Board responded to a Joseph Rowntree Foundation annual report on poverty, which shows that 13.4 million people were in poverty during 2020/21 including 3.9 million children

Cllr Pete Marland, Chair of the Local Government Association’s Resources Board responded to a report by the National Audit Office on the timeliness of local auditor reporting