A 12-year-old from Hampshire has been named the winner of Blue Peter’s Awesome Orbit competition to design an emblem that will go on one of the first satellites to launch from the UK this summer.

Bethany Turner, from Alresford, appeared live on Friday’s (20th May) episode of Blue Peter, joining the presenters in the studio as her ‘Earth Sitter’ emblem was named the winner. Bethany wants satellites to help in measuring the melting of the polar ice caps and monitoring deforestation, to discover when trees have been felled and where new seedlings need to be planted to prevent global warming.

The programme also featured 2nd place runner up Adam, aged 13 from Lancashire, who designed “The Ace of Space” that could be used to help repair broken satellites, and 3rd place runner up, Ava, aged 7 from Pembrokeshire, whose ecologically focused design “Where Bees Belong” could help search for land that needs more flowers for bees. Adam and Ava will have their names engraved on the satellite, along with 27 runners up.

British ESA astronaut Tim Peake launched the competition, which was supported by the UK Space Agency, in October 2021 to give young people across the UK the opportunity to design an emblem and come up with ideas for how satellites could be used to help people in the future. 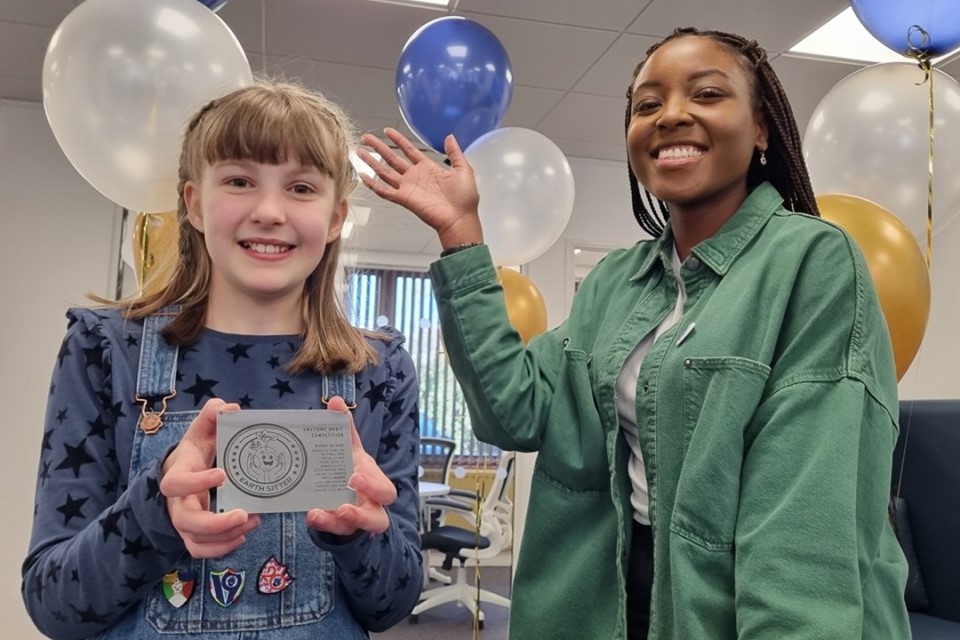 Bethany with her design and Blue Peter presenter Mwaksy Mudenda

It felt amazing when I found out I had won, I was so shocked I couldn’t believe it. For my design I thought if we could scan the Earth with satellites it could tell people when there’s illegal deforestation and they could go and plant trees. It could also scan the polar icecaps so people can see when they’re melting and try to prevent it.

I’ve been interested in space for quite a long time and I really enjoy it. I get most of my information from books from the library or books I’ve bought and I definitely want to learn more. I’d definitely be interested in working in the space sector in the future.

As part of Bethany’s prize, she spent a day with Steve Neaves, Creative Director at Hampshire-based branding and design studio Crux. Steve and his team had worked on Bethany’s original drawing to help create the final emblem that will blast into space. They explained how her design had been redrawn and digitised to enable it to be engraved onto the plaque that will be fixed to the satellite.

We all use space every day, from watching satellite broadcasts, using a mobile phone, to finding our way around. Data from satellites in space is even used for monitoring the environment and understanding climate change and it’s a big part of new technologies like supporting driverless cars through better connectivity.

From missions to Mars, to understanding climate change or launching satellites, all this great work relies on more young people joining the space sector in roles such as engineering, law, science and philosophy and the UK Space Agency is working to inspire future generations to consider a career in the space sector. It’s fantastic to see so many people take part in this wonderful competition and our huge congratulations go to Bethany, Adam, Ava and all the runners up.

I heard the brilliant news about you winning the Blue Peter space competition and I thought ‘where could be the best place to congratulate you from, but here in space’. I am currently on my own mission, and I have brought along the Blue Peter badge for the ride!

Bethany’s emblem will be engraved onto a satellite that will be sent into orbit on the first launch from UK soil from Spaceport Cornwall this summer.  As part of her winner’s experience, Bethany will also win a Blue Peter Orange Competition winners’ badge, take control of a Mars Rover at Airbus in Stevenage, experience a trip in a driverless car supported by satellites and get to see behind the scenes at satellite testing facilities at Harwell Space Cluster, in Oxfordshire.

The satellite is a collaboration between the UK’s Defence Science and Technology Laboratory, and Airbus Defence and Space, and designed and built by In-Space Missions in Alton, Hampshire.