Young people with innovative ideas for how satellites can improve life on Earth have pitched their plans to space industry experts in a bid to win support to turn them into reality.

The “Dragons’ Den” event, organised by the UK Space Agency, saw the six expert judges make offers including mentoring, introductions to other industry contacts and tickets to the UK Space Conference which takes place in Newport, South Wales in September.

The 11-22 year olds taking part were all winners of the UK Space Agency’s SatelLife Competition and have already received cash prizes for their ideas.

Today’s (Tuesday 25 June) event at the Harwell Space Cluster in Oxfordshire, in front of an audience of 60 people, was the next step for them in developing their winning ideas.

The UK space sector is growing and we need more young people to join us in the years ahead so it was fantastic to see so many innovative ideas and confident pitches at our Dragons’ Den event.

This is the third year of our SatelLife Competition and each year the standard of entries continues to amaze us. It was great to see some of our young winners offered support to take their ideas forward.

Space is one of the fastest growing sectors in the UK and could create an additional 30,000 career opportunities by 2030. Now in its third year, the SatelLife competition aims to encourage young people to think about how satellites impact our everyday lives and learn more about the careers available in the sector.

The Harwell Space Cluster is the gateway to the UK space sector and has 89 organisations employing 950 people.

Stuart Martin, CEO of the Satellite Applications Catapult at Harwell, who was one of the expert judges, said:

Here at the Satellite Applications Catapult we are working hard to unlock the potential in the UK space sector and support innovation.

That’s why it is so encouraging to see the wonderful ideas these young people have. I was so impressed by their pitches, they were well researched and professionally delivered, and I look forward to seeing how they progress in the future.

Lowena Hull, 17, from Portsmouth, who scooped the overall individual prize of £7,500 for her idea to track abandoned supermarket trolleys and was offered mentoring at the Satellite Applications Catapult, said:

I found it really nerve-racking but it was a great experience. It was really good to hear what the dragons thought and see where I can improve.

The offer of mentoring will be a great experience. The next thing for me is to develop a prototype and get my idea on track. I’ve always had a passion for STEM subjects and I had a rough idea of jobs in the space sector but this has really made me consider all the potential jobs in the industry. 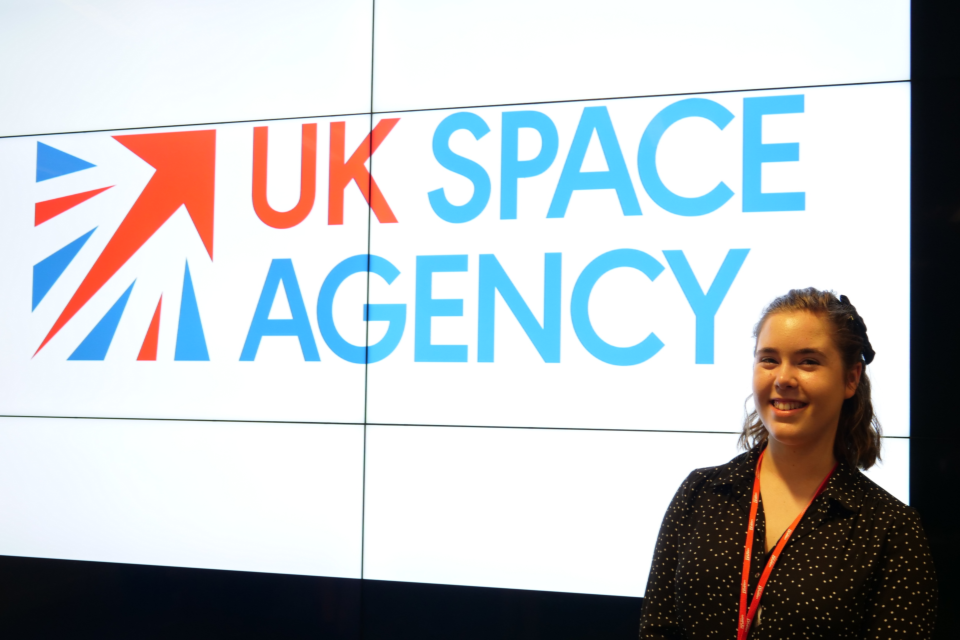 The SatelLife competition is split into 3 age groups: 11 – 14; 15 – 18; 19 – 22. The other judges on the panel at the “Dragons’ Den” event were; Nick Appleyard from the European Space Agency, Rob Hill from Kx, Adina Gillespie from Earth-i, Adam Brocklehurst from K2 IP and James Brayshaw from Planet.

With major parts for one in four of the world’s telecommunications satellites already built in Britain, the government’s Industrial Strategy includes plans to work with the industry to grow the space sector and establish commercial space launch services from the UK for the first time.

In recent years there has been significant growth in the UK space sector which provides £14.8 billion in total income and employs nearly 42,000 people. The Government is investing £50 million in a Spaceflight Programme to kick-start small satellite launch and sub-orbital spaceflight from UK spaceports, as well as £99 million in a National Satellite Test Facility at Harwell.

Trolley Tracker is a tool that uses satellites to monitor the location of supermarket trolleys taken off site and allows them to be reclaimed.

In 2015 1.5 million trolleys were taken from supermarkets and abandoned, with significant environmental impacts. This system would enable local authorities and supermarkets to better manage this problem and help solve a previously hidden issue.

This is a service, using an app, which will allow people to find public toilets when travelling. Toilets can be rated by users and reserved by those who have an urgent need – such as those with hidden disabilities such as inflammatory bowel diseases.

This tool will allow improvised explosive devices (IEDs) and other unexploded bombs to be identified in warzones, and then use drones and precision satellite positioning to increase the safety of bomb disposal teams. This will also use machine learning to improve the safety of this project.

This project proposes the use of GPS trackers that could either be attached to lifejackets or deployed to passengers alongside oxygen masks in planes, in the event of an emergency. The tracker would be linked to the seat number of the passenger, showing where individuals are in the event of a crash and assisting rescue services.

This supports emergency services by deploying emergency drones, both for medical needs and to support detection of crime.

Drones can potentially reach crime scenes or casualties ahead of vehicles. By carrying cameras or basic medical equipment such as an epipen they can help ensure an efficient response.

This project will use geo-fencing technology to prevent guns being used in areas where they could do most harm, such as near schools or at events.

This tool would add a locator to the gun, which will prevent it firing when it’s detected to be in a particular area.

This app will allow supporters to track friends and family members competing in running races. In big city marathons there is already a tracker available to do this, but it is not currently available for smaller races or those off road. This app would change that.

In some countries, such as Thailand and India, city pollution is often generated by farmland being burnt. This proposal looks to use satellite information to inform farmers when they can burn their fields safely to ensure that the smoke, and therefore air pollution, is taken away from cities and has less of an impact on the public.

This is a portable wearable device which uses satellite data to provide information about your surroundings for those with accessibility needs. These would include people with buggies, those with disabilities or those with invisible disabilities such as the need for hearing loops and autism friendly areas.

The app would provide the location of features such as drop curbs, hearing loops and wide doorways to ensure that those with additional access requirements can enjoy the same freedoms as others.

World failing to provide children with a healthy life and a climate fit for their future: WHO-UNICEF-Lancet

No single country is adequately protecting children’s health, their environment and their futures, finds a landmark report released yesterday by a Commission of over 40 child and adolescent health experts from around the world. The Commission was convened by the World Health Organization (WHO), UNICEF and The Lancet.

Sean Duggan, chief executive of the Mental Health Network, which is part of the NHS Confederation, responded to the Parliamentary and Health Service Ombudsman’s report on NHS mental health services

CIPD - Awareness, cost and bureaucracy of new immigration system should be key concern

The Financial Reporting Council (FRC) has announced a major review of how companies and auditors assess and report on the impact of climate change.

Cllr James Jamieson, Chairman of the Local Government Association, responds to the Government’s plan for a points-based immigration system.

Danny Mortimer, Chief Executive of NHS Employers, which is part of the NHS Confederation, and co-convenor of the Cavendish Coalition, responded to the Government announcement of a new points-based immigration system