The UK jobs market has continued to grow with 457,000 more people in work in February compared to last year.

New figures published by the Office for National Statistics (ONS) show the employment rate has never been higher at 76.1%, while unemployment remains at its lowest rate since the 1970s at 3.9%. 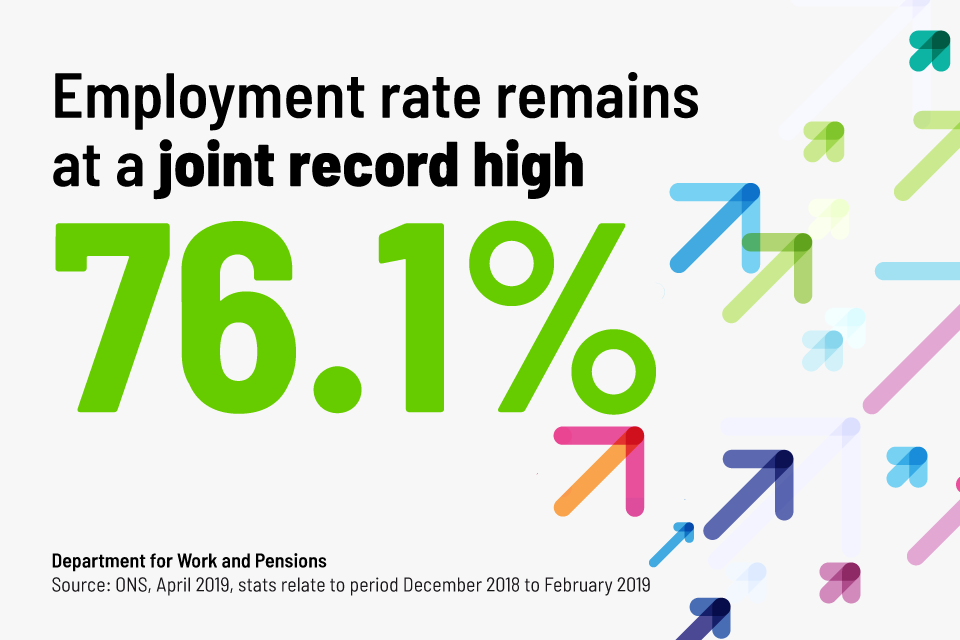 There are over 1.1 million fewer unemployed people than in 2010, with youth unemployment level almost halved in that time.

Employment Minister Alok Sharma welcomed the figures from the ONS which also showed wages outpacing inflation for 13 months in a row, with real wages growing by 1.6% on the year.

“The UK jobs market continues to go from strength to strength, proving the underlying resilience of the British economy.

“But we must not take this for granted. We need to work urgently to get behind a Brexit deal that protects this jobs record and gives employers the certainty to continue to invest in their workforce and boost wages.

“With more people in work than ever before, it is welcome news that wages are continuing to rise at their fastest rate in a decade.

“And by increasing the living wage and personal tax allowance for 2019, this government is putting more money in people’s pocket, benefiting millions of families across the country.”

The government has made more changes to the tax system for 2019 to ensure people are keeping more of what they earn.

The Universal Credit work allowance is increasing by an extra £1,000 per year

From April, working parents and disabled people will be able to earn an extra £1,000 a year before their Universal Credit starts to reduce. This change will see 2.4 million families keep up to an extra £630 per year of what they earn.

It will remain at 57.95 pence per litre across the UK. Fuel duty has been frozen for the ninth successive year, saving the average car driver £1,000.

Access to Work is increasing by an extra £2,000 per year

From 1 April 2019 people will be able to claim up to £59,200 annually through the Access to Work scheme to help pay for additional support that they may need in the workplace. This can include workplace adaptations, assistive technology, transport and interpreters.

The UK jobs market continues to boom, as the first set of employment figures since leaving the EU show the number in work has reached a new record high.

Boost for pensioners in the EU

UK state pensioners currently living in the European Economic Area (EEA) and Switzerland will continue to have their pensions increased annually.

Boost for pensioners in the EU

UK state pensioners currently living in the European Economic Area (EEA) and Switzerland will continue to have their pensions increased annually.

Prisoners in Scotland’s largest prison are to receive enhanced employment support in a bid to reduce re-offending rates in Scotland.

The new record high employment rate is at 76.3%, with the unemployment rate not lower since 1974. Wage growth has outpaced inflation for the 22nd consecutive month.

Jobcentres across the UK are to benefit from a boost of up to £3 million to support homeless people, Minister for Welfare Delivery Will Quince said today.