The Royal Navy has led a multi-national task group of warships and aircraft into the High North for the first time in more than twenty years on an operation to demonstrate freedom of navigation above the Arctic Circle.

The ships undertook training with each other to further develop their Navies’ interoperability while asserting our nations’ commitment to upholding peace in the region.

The High North is witnessing a change in its security environment and represents a key area of interest for the UK. Recent Russian attempts to control freedom of access and navigation in the region are of concern to the UK and our partners.

The UK is the closest neighbour to the Arctic states. In addition to preserving UK interests we have a responsibility to support our Arctic Allies such as Norway to preserve the security and stability of the region.

It is vital to preserve freedom of navigation when melting ice caps are creating new shipping lanes and increasing the risk of states looking to militarise and monopolise international borders.

Over 1,200 military personnel from four nations took part, supported by US P-8 Poseidon and Danish Challenger Maritime Patrol Aircraft along with RAF Typhoons and a RAF Voyager refuelling tanker.

This multi-domain operation is the first time that the UK has operated Typhoons in the High North. RAF aircraft conducted an air defence exercise to improve integration between air and maritime assets.

It is also the first time the UK has operated so far north alongside Denmark and Norway, both of whom are part of the Joint Expeditionary Force (JEF). Through groupings such as JEF and NATO, we demonstrate the UK’s commitment to peace, security, and freedom of access and navigation in the High North. These organisations are vital in setting the conditions for international security and it is crucial we all play our part in an increasingly unstable world of persistent challenge and competition.

Flights, operations at sea, and exercises are important contributions to Norwegian and European security as part of a larger cooperation on the defence of the Alliance. In order for allied forces to reinforce the defence of NATO’s northern part, they need to have the knowledge to operate there. For this reason, Norwegian and Allied military personnel, groups, aircraft and ships need also to train and exercise in Norway and the High North in peacetime. Training together with US, British, and Danish forces strengthens the operational value for both our own and their forces, and enables us to operate seamlessly together.

HMS Sutherland led the ships through a demanding series of exercises, testing their abilities to conduct surface and anti-submarine warfare in one of the world’s most challenging of environments. Conducting routine tasks, such as replenishment at sea, in conditions close to freezing and in unfamiliar waters becomes a vital training exercise to ensure effective integration between allies. 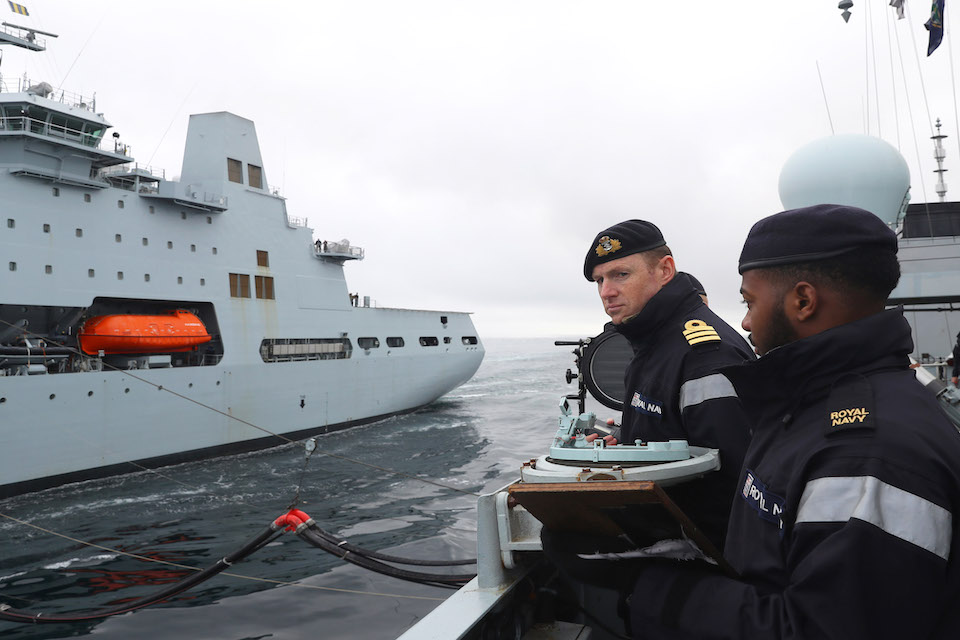 More than 1,200 personnel are taking part in the exercise. Crown copyright.

Our activity was completed in a considered manner that demonstrated each nations’ continued determination to ensure stability and security in the High North.

It has been thoroughly rewarding to operate in the High North. This operation has been an amazing opportunity to hone the skills of my Ship’s Company not only in this challenging and demanding environment but also to work more closely with key allies in an incredibly important region.

During a recent visit, which promoted the bilateral military co-operation between the UK and Kazakhstan, the capability of the RAF A400M was showcased to the Kazakh Government.

The Defence Infrastructure Organisation (DIO) has completed the refurbishment of a hangar at RAF Waddington to convert it into a joint training facility.

Troops and veterans one step closer to stronger legal protection

The Overseas Operations Bill for service personnel and veterans was yesterday laid before Parliament for its Second Reading.

Hundreds of UK troops parachute into Ukraine for joint exercises

Over 200 British paratroopers made history this week when they jumped into southern Ukraine for the first time.

A new all ranks Common Room has officially opened at RAF Benson, enhancing the lived experience of RAF personnel and their families.

RAF looks to the future on Battle of Britain Day

On the 80th anniversary of the Battle of Britain a special day of events was hosted at RAF Waddington, the home of the RAF’s intelligence gathering assets, showcasing how the RAF are ready to meet the challenges of today, and the emerging threats of tomorrow.