UK adults are now spending more than a quarter of their waking day online – the highest on record – with services such as TikTok and Zoom seeing unprecedented growth, according to Ofcom’s latest study into the nation’s online lives. 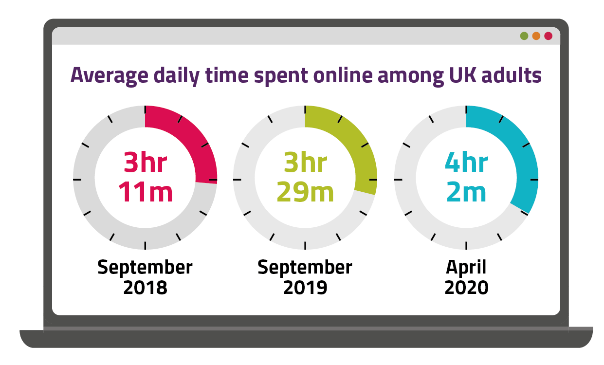 Ofcom’s annual Online Nation[1] report reveals that in April 2020, during the height of lockdown, UK adults spent a daily average of four hours and two minutes online – up from just under three and a half hours in September last year.[2]

With people seeking new ways to keep connected, informed, entertained and fit during the pandemic, emerging video-sharing and video-calling services are surging in popularity.

The proportion of UK online adults making video calls has also doubled during lockdown, with more than seven in 10 doing so at least weekly. Houseparty, the app which combines group video-calls with games and quizzes, grew from 175,000 adult visitors in January to 4 million in April. But the biggest growth was seen by Zoom, the virtual meeting platform, which grew from 659,000 UK adults to reach 13 million adults over the same period – a rise of almost 2,000%.

New research published by Ofcom highlights which phone and broadband companies are setting the industry standard for good customer service.

Ofcom yesterday announced the appointment of two new members of its Advisory Committee for Scotland.

Lockdown leads to surge in TV screen time and streaming

A surge in screen time during lockdown saw UK adults spend 40% of their waking day watching TV and online video services, Ofcom has found in its annual study of the nation’s media habits.

Broadband customers who are out of contract are set to benefit from a package of pricing changes and commitments from their providers, following a review by Ofcom.

The Competition and Markets Authority (CMA), Information Commissioner’s Office (ICO) and Ofcom have set up a new forum to help ensure online services work well for consumers and businesses in the UK.