Up-and-coming recording artists in Leicester have made a Christmas song during lockdown to bring festive cheer to communities after a turbulent year – made possible by social enterprise, HQ CAN, and funding from The National Lottery Community Fund, the largest funder of community activity in the UK. 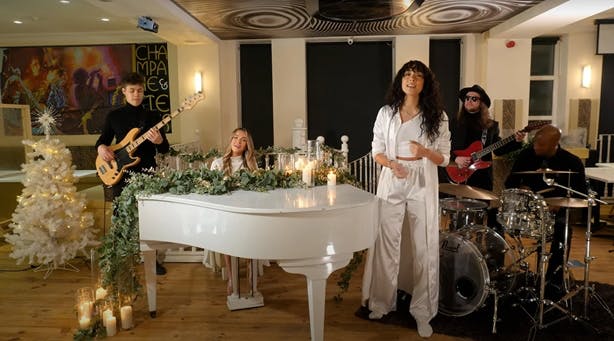 Band singing 'I Believe in Christmas'

The festive track titled, ‘I Believe in Christmas’, was created by seven of the city’s music talents – Alice Kübe, Jake Wincott, Morgan Munroe, Andrew Price, Matt Bury, Michal Kais and Eddie Dublin - in just five weeks during the pandemic, with the aim of bringing a sense of togetherness to people and communities while they have had to remain apart.

Alice, the lead vocalist and songwriter, and Jake, the producer, were given the confidence to take on this ambitious project by HQ CAN, which was awarded almost £185,000 of National Lottery funding. Based on Charles Street, HQ CAN has been transformed into a creative hub, where local people can learn new skills in singing, producing music and filming music videos, moving them closer to employment.

Despite the challenges presented by COVID-19 this year, this vital National Lottery funding has enabled HQ CAN to carry on its crucial support and bring glimmers of hope to the local community.

Alice, 24, first came to HQ CAN 18 months ago, where she stepped foot in a recording studio for the first time, despite having a love of singing since she was ten-years-old. She now mentors newcomers to the project, helping to boost their self-esteem and provide advice on vocals.

Speaking about ‘I Believe in Christmas’, Alice yesterday said:

“I’d never written a Christmas song before and it’s something I’ve wanted to do for a while. This year I thought, why not? Let’s do it! The song’s about how the Christmas spirit dies a bit as you get older, but then there’s a special person that brings it back to life again. I really hope it makes people feel positive when they hear it, especially after the tough year we’ve all had.”

Jake, 21, first started at HQ CAN on work experience in 2019, but has now secured a paid role at the enterprise as a producer after developing his skills.

“I’ve always been into music and as a young teen I wanted to be a DJ, like Calvin Harris or David Ghetta. I taught myself how to produce music on my computer and it went from there. Yasin at HQ CAN has taught me a lot – as well as being a mentor and manager, he’s been a father figure to me.”

“It was challenging getting the song right and pleasing everyone involved, but it was such a good feeling when we knew we had the final version.”

Alongside National Lottery funding, HQ CAN also received an emergency £37,500 grant from the Government’s Coronavirus Community Support Fund, distributed by The National Lottery Community Fund. This meant it could provide equipment, such as keyboards and microphones, to people so they could continue pursuing their passion for making music at home.

“Thanks to National Lottery players we have been able to get through this difficult year – the funding support we’ve received has been a real life saver. We had to adapt quickly by holding Zoom calls, providing PPE for the face-to-face sessions that could take place, and hosting online gigs so people could still perform and utilise their skills.

“It has been a strange time in Leicester this year, particularly when we entered the first local lockdown – it felt like a forgotten city. Everyone started pulling together, showing that Leicester is great and resilient. Creating this Christmas song has been our way of helping to spread some cheer.”

Yasin was named as The Prince’s Trust Mentor of the Year 2018 for supporting young people who had been out of education, employment and training for 12 months or more. Both Alice and Jake have also been supported by The Prince’s Trust. This is why they have decided to give something back and donate 25p from every download of the song to The Prince’s Trust

‘I Believe in Christmas’ can be downloaded from Spotify, Apple Music and all major online digital service providers. The music video, which launched only yesterday, on Monday 7 December, can be watched on YouTube

“I have known Yasin for a few years now and his commitment to supporting young people never ceases to amaze me. Musicians like Alice and Jake have certainly been affected by the pandemic, so please show your support and download their festive song. By downloading ‘I Believe in Christmas’, not only will you get to listen to a great song, but you will support The Prince’s Trust and help many more young people to succeed in life.”

HQ CAN is just one of the many good causes that has stepped up to support people during this challenging year. New figures released today reveal that over £8 million has gone to 101 community groups across Leicester throughout 2020*, thanks to National Lottery players.

Despite the challenges presented by COVID-19 this year, over £650 million of vital National Lottery funding has been distributed to more than 13,000 community organisations, enabling inspiring local good causes to carry on their amazing work.

“I am incredibly proud of the difference National Lottery funding has made in what has been an extremely difficult year, helping to boost community spirit when it has been needed most. Our communities are more important than ever and we’re delighted that so many groups, like HQ CAN, and volunteers and community workers have stepped up to provide vital support. We should all feel inspired and reassured by the strength we have seen in communities throughout this turbulent year.”

Thanks to National Lottery players, £30 million is raised every week for the UK’s good causes, and £41 billion has been distributed to 565,000 good causes across the UK since 1994.

Last year, we awarded over half a billion pounds (£588.2 million) of life-changing funding to communities across the UK. Over eight in ten (83%) of our grants are for under £10,000 - going to grassroots groups and charities across the UK that are doing great things to support their communities through these challenging times.

To find out more visit www.TNLCommunityFund.org.uk

We are the largest funder of community activity in the UK – we’re proud to award money raised by National Lottery players to communities across England, Scotland, Wales and Northern Ireland. Since June 2004, we have made over 200,000 grants and awarded over £9 billion to projects that have benefited millions of people.

We are passionate about funding great ideas that matter to communities and make a difference to people’s lives. At the heart of everything we do is the belief that when people are in the lead, communities thrive. Thanks to the support of National Lottery players, our funding is open to everyone. We’re privileged to be able to work with the smallest of local groups right up to UK-wide charities, enabling people and communities to bring their ambitions to life.

Additional support will be made available to improve wellbeing and mental health as we cautiously welcome the new year, thanks to more than £3.4 million National Lottery funding announced today in Wales.

New research out from The National Lottery Community Fund, reveals that the pandemic has helped people see the benefits of being part of their local community and sparked a desire to be more involved in 2021.

2021: importance of communities set to remain high as people identify loneliness and isolation as a key issue to tackle in their local area

New research out today from The National Lottery Community Fund, the largest funder of community activity in the UK, shows that the pandemic has helped to reignite people’s interest in their local community and sparked a desire to be more involved in 2021.

The National Lottery Community Fund yesterday announced over £3 million of grants to 162 community projects, based in every Council area in Northern Ireland.

The National Lottery Community Fund yesterday announced it is working alongside a number of expertly-placed funding programmes in London to ensure more than £1.3 million of National Lottery funding is delivered to communities most vulnerable to the impact of COVID-19.

Scottish families facing loss, isolation or loneliness are amongst those benefiting from a £4 million cash boost from The National Lottery Community Fund announced today (THURSDAY 17 DECEMBER).

‘We’ve had to learn to be resourceful, whilst helping our community to do the same’: The Cornish charities bringing people together, thanks to £13.5 million of National Lottery funding

New figures released yesterday revealed that over £13.5 million has gone to community groups across Cornwall this year*, thanks to National Lottery players.

‘This year people have opened up to each other…we want that to continue’: The Devon organisations supporting their community, thanks to National Lottery Funding

New figures released today reveal that nearly £1.5 million has gone to community groups across Devon this year, thanks to National Lottery players.

‘We had to catapult ourselves into the unknown’: How one Bristol charity cooked over 17,000 meals for those hit hardest by COVID-19

New figures released yesterday reveal that nearly £7.5 million has gone to community groups across Bristol this year*, thanks to National Lottery players.