Von der Leyen at the video conference of the members of the European Council discusses vaccination, security and defence, and Southern Neighbourhood

EU leaders' met via video conference on 25 and 26 February 2021. They discussed the fight against the COVID-19 pandemic and the vaccination campaigns, EU's security and defence as well as partnership with the Southern Neighbourhood. 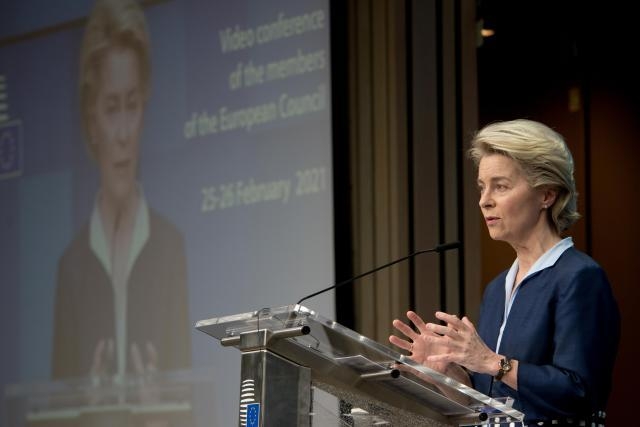 “The first task is to achieve widespread vaccination”, President of the Commission Ursula von der Leyen said at the press conference following the first day of talks. “We should maintain our utmost efforts so the pace of the vaccination picks up.” She said that by end of February more than 50 million doses of vaccines would have been delivered to the European Union, with than 29 million doses administered.

To continue increasing the speed of our vaccination effort, she called on everyone to play a role. The Commission is working with the companies to ramp up production and address bottlenecks in the supply, she explained. In parallel, efforts are needed to detect and tackle as soon as possible the new variants. That is the reason why the Commission launched on 17 February the HERA Incubator to build up our response to variants and to stay ahead of the curve.

President von der Leyen also touched upon the question of vaccination certificates where she acknowledged there were still many open issues. “The decision on what you are able to do potentially with such a vaccination certificate is to be decided particularly within each country. But at the EU level, I believe we should use them to ensure the functioning of the Single Market,” she said.

Von der Leyen offered that the Commission coordinates on the standards, similarly to tracing apps, and creates a gateway that connects the different national solutions with each, other so that this information is interoperable over time.

On the second day, the leaders discussed security and defence, and Southern Neighbourhood. They also met with NATO Secretary General Jens Stoltenberg.

Von der Leyen praised EU-NATO cooperation, while also stressing Europe needed ‘to develop its own capabilities'. “That is why we have set up the first building blocks of the European Defence Union. It is the PESCO – the Permanent Structured Cooperation – supported by the new EUR 8 billion European Defence Fund. It will help us to develop military capabilities as Europeans together,” she said.

She concluded the second day discussions with a focus on renewing our partnership with the Southern Neighbourhood. The EU has mobilised EUR 2.3 billion in support for health and economy in the wake of the COVID-19 pandemic, and aims to support long-term socio-economic recovery of the region. “Under this plan, the Commission proposes to mobilise up to EUR 7 billion. In turn, this would help mobilise private and public investments worth up to EUR 30 billion,” von der Leyen said, highlighting the EU will continue to engage with the Southern Neighbourhood across all the areas where we share common challenges.

Opening remarks given yesterday by President von der Leyen at the civil society consultation ahead of the Global Health Summit.

The European Commission yesterday published preliminary figures on road fatalities for 2020. An estimated 18,800 people were killed in a road crash last year, an unprecedented annual fall of 17% on 2019.

The European Commission and Austria yesterday announced the conclusion of agreements for the delivery of COVID-19 vaccines for the Western Balkans.

The Council yesterday adopted the two programmes which constitute the EU justice, rights and values fund as part of the EU financial framework for 2021-2027.

The European Commission has adopted revised EU guidelines on regional State aid (the “Regional Aid Guidelines”), setting out the rules under which Member States can grant State aid to companies to support the economic development of disadvantaged areas in the EU, while ensuring a level playing field between Member States.

The Council yesterday adopted its first reading position on the proposed regulation establishing the EU space programme (“the programme”) for the years 2021 to 2027.

Conference on the Future of Europe: launch of the multilingual digital platform

The EU yesterday announced new funding of €53.7 million in humanitarian aid for the most vulnerable people in Ethiopia, including those affected by the conflict in Ethiopia's Tigray region.