The CyberFirst Girls Competition 2020 is set to take place and crown schoolgirl codebreakers. 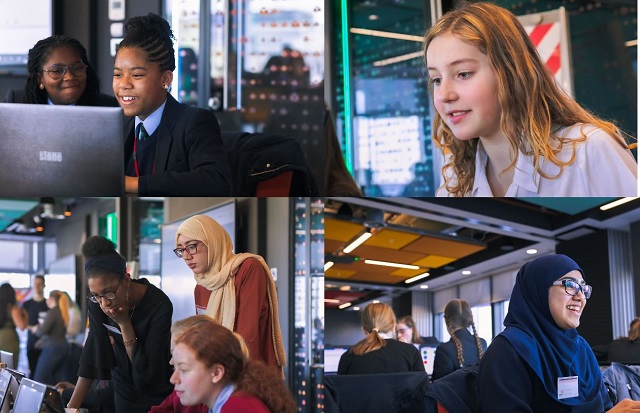 Cyber savvy schoolgirls from across the country are preparing to do battle next week in an attempt to be crowned the nation’s codebreaking champions.

Ten teams of pupils saw off challengers at regional contests last month to reach the Grand Final of the 2020 CyberFirst Girls Competition, being held on Monday 16th March.

The contest, aimed at girls aged 12 and 13, will see the teams of up to four tackle a real-world scenario of protecting a global sporting event from cyber attacks over more than four hours of gameplay.

This is the fourth year the National Cyber Security Centre – a part of GCHQ – has run the CyberFirst Girls Competition and this year’s final will be hosted for the first time in Cardiff, Wales, ahead of the CYBERUK conference in Newport on May 19th-20th.

This year’s newly expanded competition saw a series of semi-finals run simultaneously at venues across the UK, to ensure all parts of the country were represented.

“It’s wonderful to see girls from across the UK coming together to put their problem-solving skills and technical expertise to the test. I wish all the finalists the best of luck in the Grand Final.

“No matter who wins this year, the CyberFirst Girls Competition will have hopefully inspired the thousands of girls who took part to pursue their interests in the field of cyber security.”

Loughborough High School, one of the schools to reach this year’s final, yesterday said:

“We are always looking for ways to provide the girls with opportunities to enrich their education beyond the curriculum, to develop in them the confidence and skills necessary to become valued members of society.

“This competition has provided the girls with such an opportunity and a fascinating insight into the world of cyber security.”

Nearly 12,000 girls from 754 schools have taken part in the competition this year, allowing for even more cyber talent in the UK to be discovered.

The CyberFirst Girls Competition was launched with the aim of boosting interest in cyber security among females, who are currently under-represented in the industry. Women make up only 11% of the global workforce in the field and this scheme is pitched at pupils starting to think about what subject choices to make for their GCSE exams and beyond.

One of this year’s finalists, the team from the Tiffin Girls’ School in Surrey, was last month featured on BBC1’s The One Show, alongside David Schwimmer and Nick Mohammed who were promoting ‘Intelligence’ their new comedy about GCHQ.

Since 2017, 37,000 girls have taken part in the scheme, and of last year’s entrants 98% said they would like to learn more about cyber security. The competition is open to girls in Year 8 in England and Wales, S2 in Scotland and Year 9 in Northern Ireland.

Ten universities around the UK have received official recognition for their postgraduate degrees in cyber security.

UK government’s cyber security event to be held virtually on 11-12 May giving the widest audience chance to participate.

Lindy Cameron will speak to a virtual audience at Queen’s University, Belfast, today.

As part of the Cyber Aware campaign, a new tool has been developed to help consumers understand their cyber security risk.