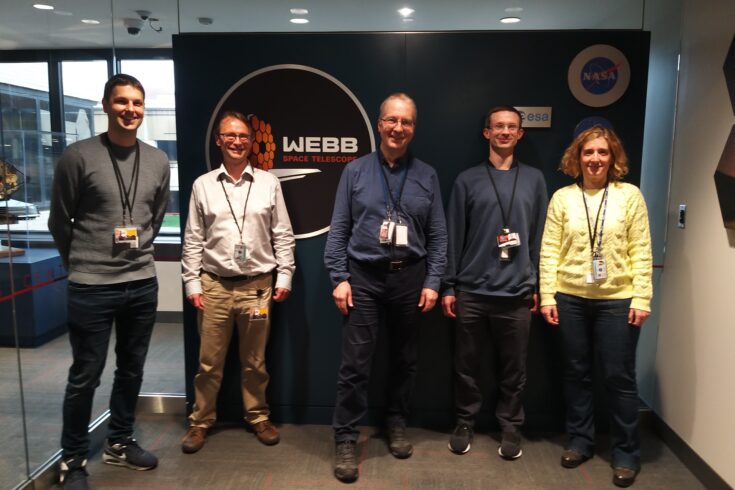 The STFC team outside the Mission Operations Centre (MOC) in Baltimore (credit: STFC).

MIRI is the last instrument on the James Webb Space Telescope to reach the temperature required for scientific operations, marking an important stage in Webb’s progress towards full science mode.

The coldest instrument on Webb

The James Webb Space Telescope, known as Webb, is the largest, most powerful telescope ever launched into space and MIRI is one of four scientific instruments on board.

MIRI was last to reach this important milestone as it operates at 7 kelvin (-266 Celsius), a colder temperature than the other instruments.

To reach this temperature, MIRI needed to be actively cooled by a cryogenic refrigerator, or cryocooler.

The cryocooler was specially developed by NASA’s Jet Propulsion Laboratory (JPL) while the Science and Technology Facilities Council’s (STFC) RAL Space in the UK were responsible for overall instrument thermal engineering.

MIRI needs to be cold because the instrument sees in mid-infrared light and every object emits infrared radiation, or heat, all the time.

Therefore, MIRI must be cooled to make sure its detectors do not pick up any background heat from the instrument itself, obscuring what the astronomers actually want to see.

I have been involved in the thermal design, analysis and testing for MIRI for almost 20 years so to finally see the instrument reaching 7 kelvin in space and well on its way to science operations is incredibly exciting.

Our team has worked hard to make sure everything works at this challenging temperature and the last few months monitoring the cool down has been the culmination of all of our efforts.

I’m looking forward to seeing the first results at the end of the commissioning process.

Webb’s mission to explore the universe is led by:

The UK played a major role by leading the European Consortium which, partnered with JPL and other US institutes, designed, built, and tested MIRI.

The mission so far

After successfully launching on Christmas Day 2021, Webb spent a month travelling through space to reach its new home in orbit one million miles from Earth.

Over the last two months the commissioning team have been working on aligning the 18 mirror segments and cooling down the scientific instruments.

Scientists, engineers, and astronomers from STFC’s UK ATC and RAL Space are actively involved in this complex and painstaking commissioning process.

Working alongside international colleagues at the Space Telescope Science Institute in Baltimore monitoring and commanding MIRI and Webb in shifts, 24 hours a day.

It is fantastic to know that the instrument has successfully reached operating temperature.

The MIRI cryocooler is a real technical first, and it is a great testament to the talents of our JPL partners, who led the cryocooler development, that the cool down process has worked as anticipated.

As the last instrument to reach operational temperature, this a significant milestone in MIRI and Webb’s lifetime.

Now MIRI has successfully cooled down the commissioning process will continue.

The next few months will be spent testing MIRI’s systems and making final alignment adjustments to Webb before we can expect the first spectacular images of the cosmos this summer.

MIRI was developed as a 50:50 partnership between Europe and the US.

JPL leads the US efforts for MIRI with George Rieke, University of Arizona as the science lead.

The MIRI cryocooler development was led and managed by JPL.

The focal plane systems (detectors and signal chain electronics) and the flight software that operates all the components were also provided by JPL.

The MIRI development has been funded by the UK Space Agency and STFC, part of UK Research and Innovation, and ESA.

All the MIRI partners have key roles in preparing the commissioning and calibration of the instrument and support post-launch verification.