What good will the GDF do for its community?

A community that hosts a geological disposal facility (GDF) for radioactive waste will help solve a huge problem for the UK, not just for now, but once and for all. And for the community itself, the benefits linked to this £multi-billion investment will also be immense. Funding benefits would start quickly, and jobs benefits would go on to last for generations.

Any infrastructure project of £billions will create thousands of jobs, many of them highly skilled. What makes a GDF different, is that while the initial GDF construction phase will stretch over around 10 years and require a workforce of up to 2,000 during the peak period – the total construction and operation will take well over 100 years, employing local people and supporting local businesses all the time.

Construction activities will continue throughout its operational lifetime as the network of tunnels and vaults are extended stage by stage. A GDF will be receiving waste for more than a century and is expected to support thousands of jobs, both full-time at the facility and, more indirectly, in the supply chain.

Some jobs will require external specialists, but many skills will be available locally, along with suppliers. We plan to recruit as many local people and businesses as possible, as well as invest in training to build sufficient expertise for the operational years ahead. When we understand more about a potential location, we’ll be able to develop a clearer picture. 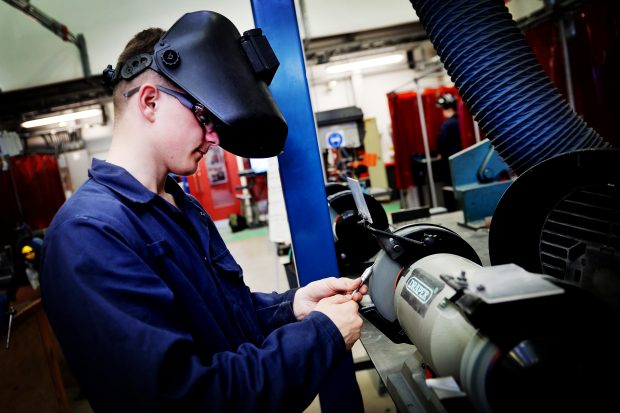 Just as Sellafield in Cumbria has attracted an influx of specialised nuclear businesses and led to the establishment of Britain’s Energy Coast, with nuclear-focused educational initiatives, so a GDF would attract inward investment.

Generations of people will have opportunities develop their skills and take advantage of new employment and training initiatives.

A GDF could also require associated infrastructure such as enhanced road, rail networks, or portside improvements. In Sweden, for example, plans for a GDF include a new ferry terminal and train services linking the host community of Forsmark to the capital city, Stockholm.

Depending on the location eventually selected, infrastructure upgrades may be required

In the UK, the host community will develop a vision for the long term, which could include better transport links, broadband, education, healthcare facilities or environmental improvements. Remember how spoil from the London 2012 Olympic Park construction was used to create a new nature reserve?

As we move forward and are able to focus, for example, on a realistic geological setting in a specific area, RWM will commission a detailed study of the anticipated requirements for skills, expertise and training.

Investing in the community

Of course, a GDF will also bring significant benefits well ahead of construction.

Before we even contemplate construction, we need a community’s informed consent, which can involve a commitment to asking questions, reading resources, attending meetings and more. To avoid overburdening a community, government funding is available to cover the costs of meetings and seeking out information from print or online sources.

The opportunity to take part in such a massive decision is also about communities deciding what they want for their own future.

Once members of the Working Group and the wider community, together with Radioactive Waste Management, arrive at the point where they wish to form a Community Partnership, community investment funding of up to £1 million a year will be available. A Community Partnership forms after the Working Group has engaged locally and identified one or more prospective Search Areas. This figure rises to up to £2.5 million a year once deep borehole investigations start, part of the process to understand the geology.

And in allocating resources, the Community Partnership will listen first and foremost to local views and priorities, for example, supporting sports, economic development, community wellbeing, investing in young people, expanding libraries, etc. Local people will be able to seek funding for relevant projects.

The commitment to early funding arose from reviewing previous GDF discussions which ended in 2013. Throughout the process, people understood that the GDF would have brought massive benefits – but when the process ended, none of those benefits could be realised. Now, communities can use the investment funding before any commitment to a GDF, benefitting from engaging in the process whatever the outcome.

The combination of different funding, investments and other benefits means that a GDF will improve life for the host community’s people now, as well as over the facility’s multi-generational life.

Before I joined Radioactive Waste Management, one of my jobs was setting up a charity for a utility company. I had to find ways to make sure the company’s charity work wasn’t just handing out dollops of money, but actually making a difference. Supporting infrastructure and other long-term projects translates community investment into real social good.

Improving assets such as schools or the landscape is one of the fairest ways to ensure everyone benefits over the whole life of the project.

There are many ways your community could gain from taking part in this project, to whatever extent you want.

NDA Annual Report highlighted amongst best in the public sector

The NDA’s Annual Report and Accounts has been recognised by the National Audit Office (NAO) as an example of best practice amongst public sector organisations.

A GDF in rock deep below the seabed – yes, it could work

14 successful companies have been awarded contracts to come up with innovative approaches to remotely sort and segregate radioactive waste.

What’s it like to be a Sellafield Ltd apprentice? #askanapprentice

NDA announces new Chair of the Sellafield Ltd Board

NDA pledges to inspire next generation of nuclear workers

A virtual exhibition is now available for Cumbrian residents interested in finding out more about potentially hosting a GDF.

UK-Japan relationship in nuclear science boosted by robotics and automation.