A new techUK whitepaper shares recommendations to UK and Japan governments to spur international collaboration across the tech industry.

techUK, in collaboration with its UK-Japan Tech Forum, has published an industry position paper on future UK-Japan cooperation on data, tech and innovation. Jointly run by techUK and JEITA (Japan Electronics and Information Technology Industries Association), the forum brings together both organisations’ members to speak with one voice on the role which technology can play in strengthening this vital partnership. 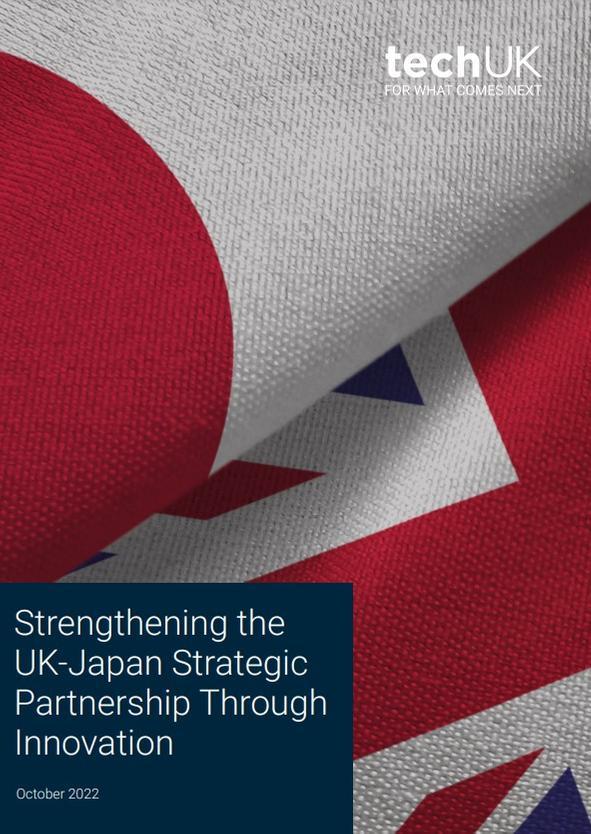 The whitepaper Strengthening the UK-Japan Strategic Partnership Through Innovation makes recommendations for the governments of the UK and Japan for bilateral cooperation on digital trade, data and emerging technologies, as well as on how both countries can leverage their leadership on an international level to advance the digital trade agenda – building on existing commitments between both countries made in the Joint Announcement on Digital Collaboration and the formation of the UK-Japan Digital Group in May 2022.

From the ambitious digital chapter and mechanisms for shared innovation in the Comprehensive Economic Partnership Agreement (CEPA) between the UK and Japan in 2020 to the launch of the UK-Japan Digital Group earlier in 2022, technology is critical to what both countries can achieve together. As both the UK and Japan have set out their strategies for technology, it is clear they are ambitious about a future with shared strategic goals.

The technology industry welcomes the determination to work more closely on developing digital solutions, facing shared challenges, and on collaborating across the range of technologies that will shape the future of both the UK and Japan, such as AI, quantum, digital twins, and blockchain.

I am delighted that the Japanese and UK tech sectors are playing a leading role in realising the potential of collaboration between the UK and Japan to deliver tangible benefits to both countries. The UK-Japan Tech Forum brings together techUK and JEITA to speak with one voice on the role which technology can play in strengthening this vital partnership. This paper from the Tech Forum builds on the far reaching digital and data provisions in the Comprehensive Economic Partnership Agreement and sets out concrete recommendations to grow strategic collaboration, increase trade and drive future investment. The Tech Forum is committed to making sure innovation remains at the heart of the UK-Japan partnership and that we use technology to solve shared challenges and realise the potential of cooperation.

Japan and the UK are like-minded partners sharing the same values and interests, including an open market economy, human rights, freedom, equality, and the rule of law. The fact that the UK-Japan CEPA was the first trade agreement signed by the UK after it became an independent trading nation in January 2020 shows the seriousness of the economic relationship between the two countries and mutual respect. With the comprehensive digital chapter, the UK-Japan CEPA demonstrates a new economic partnership that will lead to further promotion of trade and investment between Japan and the UK. The UK-Japan Digital Group is a cooperative agenda following the Japan-UK CEPA to promote common interests between the two countries. Today, when digital technology is indispensable for solving social issues such as economic growth, carbon neutrality, and the realization of wellness, we have high expectations for this "Japan-UK Digital Group", which will lead to the deepening of concrete digital cooperation.

techUK is pleased to partner with JEITA on developing a set of recommendation for further UK-Japan collaboration on tech and innovation; building on existing commitments between both countries set out in the UK-Japan CEPA and joint announcement on digital collaboration from May 2022. Technology and innovation sit at the heart of the growing UK-Japan partnership. Increasing the flow of technology and innovation between the UK and Japan can help solve shared challenges to benefit business, government and society. Jointly run by techUK and JEITA, the UK-Japan Tech Forum can help bridge UK and Japanese companies of all sizes and realise this great bridge of innovation. We are looking forward to working with the Forum members to support the recently announced UK-Japan Digital Group set up by both governments to deepen bilateral digital collaboration.

In less than two weeks techUK are hosting our sixth Digital Ethics Summit, an annual opportunity to reflect on the major ethical questions facing the tech industry. Sue Daley, Director of Tech & Innovation, shares what we should expect this year.

After agreeing to a data adequacy agreement in principle in July 2022, the UK government has completed its full assessment of the Republic of Korea’s personal data legislation.

How do your equality, diversity and inclusion (EDI) practices stack up?

WithYouWithMe has partnered with YouGov to undertake research into the ED&I practices of UK organisations - and uncovered some surprising results.

The UK Government has secured £1.84 Billion of investment for the UK space sector at the latest meeting of the ESA Council of Ministers in Paris.

The question of interoperability in the Metaverse

Joshua Bates, TMT Associate at Global Counsel writes about the implications of ownership, security and interoperability in the metaverse

techUK has published a new paper ‘Risks in Tech Supply Chains’ looking at some of the main sustainability, transparency and resilience risks facing the sector.

A new techUK whitepaper shares recommendations to UK and Japan governments to spur international collaboration across the tech industry.

techUK has summarised the key points in the Defence Supply Chain Strategy, which outlines how UK Defence plans to build resilience within its Supply Chains.

techUK is delighted to announce the results of its new working group looking at preventing and tackling violence against women and girls (VAWG). See which members made it onto the group