Our regular readers will be aware that Wired-GOV recently sponsored the alpine ski racing team from 105th Regiment Royal Artillery, the Scottish and Ulster Gunners in support of their participation in the recent Royal Artillery  Championships 2014 and Exercise Spartan Hike incorporating the Army Reserves Championships.

Final update, 3rd February: Despite a spectacular crash (view at the bottom of this page) Captain Chris Wane qualified for the Army Championships and remained in France for an extra week.

Chris has now returned to the UK having competed in the Army alpine championships in Serre Chevalier, France.

Somewhat bruised and battered from his Downhill crash at the Divisional championships, Chris opted to ski injured rather than miss another Army championships due to injury. Initially seeded 24th, Chris consistently managed to post top 15 and top 20 results which saw him slowly creep up the rankings. Chris had set himself the goal of breaking into the top 20, and finished 18th in the overall seedings, 10th in the Individual Combination. Despite his injuries Chris was still the third fastest Artillery skier, and was selected as part of the Royal Artillery team in the inter-Corps competition; the Royal Artillery came third out of eight.

The Army championships was visited by a number of high ranking officers, including the Chief of the General Staff (CGS) - the professional head of the Army.  The CGS commented on how sport is fundamental to the military and must return to being core business as the organisation looks forward beyond Afghanistan.

Chris comments: "It has been really enjoyable, and hard work, getting back into ski racing after 5 years.  Opportunities such as this is why I decided to join the military. I am proud to have been able to form the 105th Regiment RA alpine team, the challenge now is to turn it into a sustainable legacy.

I have been incredibly fortunate to have a long standing relationship with Wired-GOV and alpine racing. Without Wired-GOV's support, fielding a team from scratch simply would not have been possible - I am hugely grateful and look forward to hosting Steve and his guests in Edinburgh this summer."

Weekly update from 27th January 2014: The Scottish & Ulster Gunners have just completed Exercise SPARTAN HIKE 2014 (SH14).  The exercise covers units based in the South, Midlands and London District, and serves as the Army Reserves championships for all reserve units.  Held in Serre Chevalier, on the French/Italian border, the alpine competitors race the full spectrum of events - Slalom, Giant Slalom, Super G and Downhill. The exercise was the largest in quite some time, with 158 alpine racers. 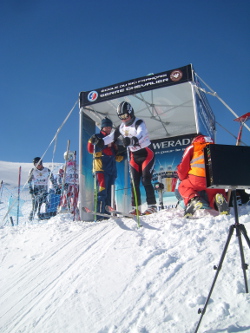 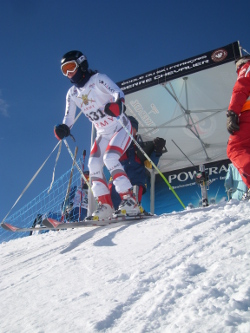 SH14 has been somewhat of a performance rollercoaster for all the team members.  Capt Chris Wane started in the top 10, some "low level" crashes results put him down to 34th, a recovery saw a return into the top 15, before a somewhat spectacular failed landing on the Downhill jump saw him end the competition in 21st place.

Capt Rich Butler jostled to keep his seeding the double figures, finishing 93rd.  LBdr Louisa Smith battled against a larger peer group at the higher end of the seedings and finished a credible 132nd.  Unfortunately Maj Brian Robson was never able to settle into the good performance he placed at the Royal Artillery championships; a number of crashes saw him finishing 149th.

If one thing will be remembered by the team members, it will be the Downhill and Super G.  With greater access to racing pistes at this exercise, the Downhill and Super G were held on a very fast slope with a very daunting jump one third of the way down the course.  The angle of the slope fall was somewhere in the region of 35-40 degrees with the top skiers clearing over 20 metres.  So impressive was the jump, in fact, that every time Louisa inspected the course she would not speak again until her run was completed.  Demanding races such as these are what alpine racing is really about; asking an individual to go as fast as they can down a race course and over a jump that anyone would think twice about when going at a leisurely pace.  Land the jump and complete the course,and the feeling of elation is second to none.  Fail to land the jump and the rewards include slicing you back open with your own ski, broken ribs and even broken vertebrae; all actual injuries incurred by various racers.

The sequence of photos below shows Chris failing to land the Downhill jump but rather landing heavily on his back, luckily without serious injury.  When put into perspective that when the exact same thing happened five years ago and resulted in a broken leg, it goes to show the type of mental resilience required to do alpine racing.

Brian, Rich and Louisa have now returned to the UK, to regale their stories and spread the word out to new potential racers within the Regiment.  Chris has qualified for the Army Championships and remains in France for an extra week, hoping to firmly remain upright on his skis!

Ouch!! Captain Chris Wane crashes out of the Downhill Jump

Business IT Support by: Trusted IT