The storm names for the 2022/23 season have been announced by the Met Office, in partnership with Met Éireann and KNMI.

Storms are named in partnership with Met Éireann and KNMI, with this being the eighth year of the storm naming project to help raise awareness and inform the public of the risks of upcoming storms. 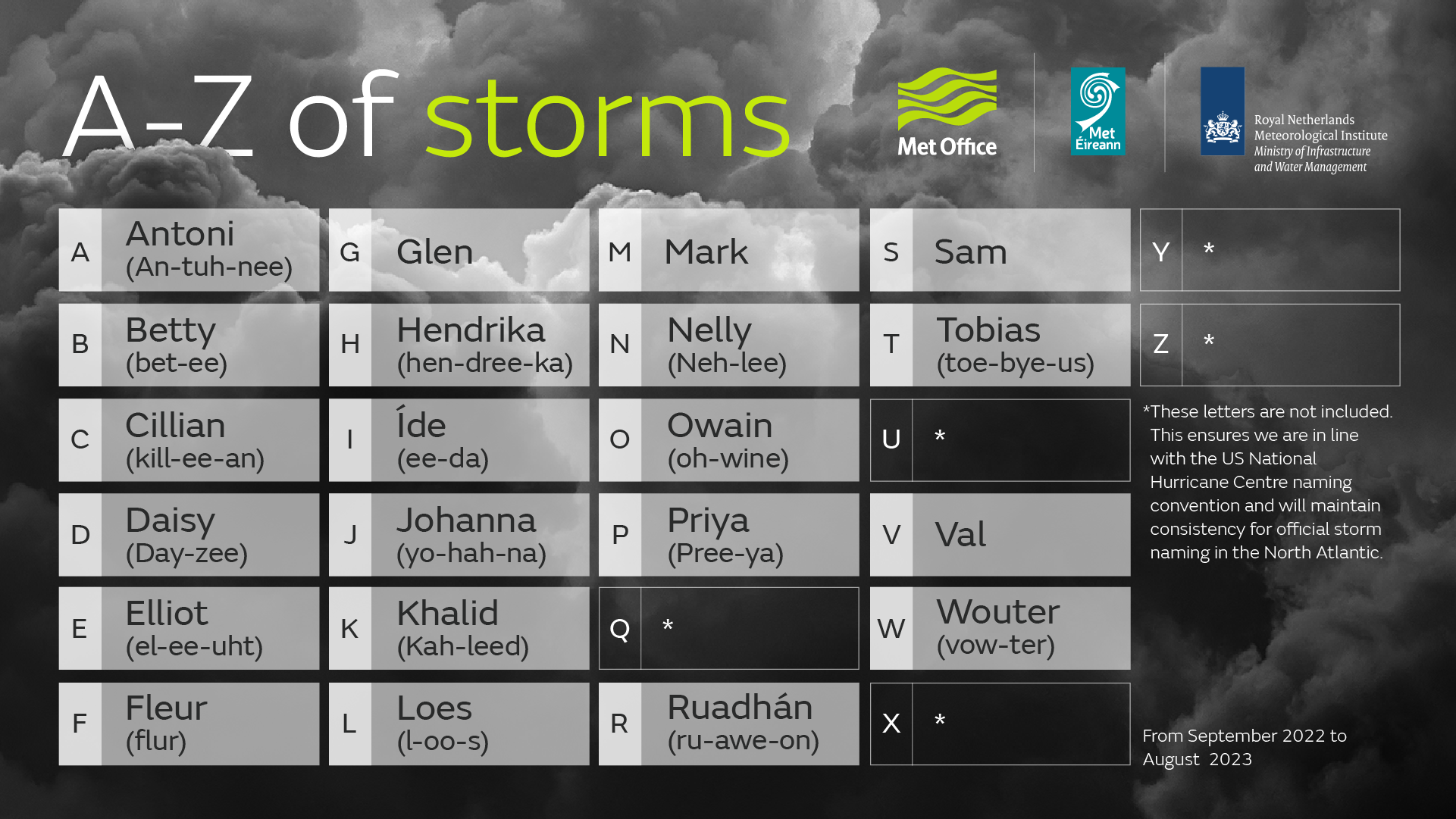 Antoni will be the first named storm of the new season, and will be named when a system is forecast to cause ‘medium’ or ‘high’ impacts in the UK, Ireland or the Netherlands. In addition to strong winds, impacts from rain and snow will also be considered in the naming process.

The Met Office’s names in the list have come through submissions from the public, with Daisy, Glen, Khalid and Owain some of those submitted, showing the breadth of names in use across the UK. Betty ran out winner of a public vote on Met Office Twitter, with over 12,000 votes cast to select the name for the letter B.

“We know from seven years of doing this that naming storms works. Last year, Storms Arwen and Eunice brought some severe impacts to the UK and we know that naming storms helps to raise awareness and give the public the information they need to stay safe in times of severe weather.”

Met Office post-event surveys show that 98% of those within the red warning area in the southeast for Storm Eunice were aware of the warning, and 91% of those took action to protect themselves, their property or business.

“Recent impactful storms demonstrated our ongoing need to communicate severe weather in a clear way to help the public protect themselves. Naming storms is just one way that we know helps to raise awareness of severe weather and provides clarity for the public when they need it most.”

“Chances are very high that severe storms will affect all three countries involved: Ireland, the UK and The Netherlands. News on severe weather is not limited to national boundaries, so the message to UK, Irish and Dutch inhabitants will be much appreciated and understood if we share the same information, starting with storm names. This year we had a good example: three named storms affected the Netherlands within a week. A rare red warning was issued for storm Eunice, one of the most severe storms in fifty years. Storms Dudley and Franklin also brought significant weather impacts. For us at KNMI, it is a great privilege and advantage to work in close co-operation with our colleagues from Ireland and the UK in the communication about storms.”

Why storms get named

Storms are named when they could cause ‘medium’ or ‘high’ impacts in one of the partner countries and help provide consistent, authoritative messaging in times of severe weather.

For Storm Eunice, which was the strongest storm to impact England and Wales since February 2014, 95% of people within the red warning area in the southeast found the warning useful, while National Highways reported 21% less traffic on the roads in England on 18 February as people amended plans to stay safe during impactful storms.

If a storm is named by a different storm naming group and impacts the UK, the given name will be used in communications, as occurred with Storm Malik in January this year. In addition, if the remnants of a hurricane has moved across the Atlantic to impact UK weather, this would be referred to as an ex-hurricane with its previously given name.