Minister for Defence People and Veterans Tobias Ellwood hosted the conference, which included delegations from Denmark, France, Germany, Italy and the Netherlands.

The conference, the first meeting of its kind, saw Ministers and military officials from six NATO countries share best practice on veterans issues and discuss how nations can further mental health support for former service personnel.

Opening the conference, Mr Ellwood outlined to delegates that while most veterans go on live happy, healthy and successful lives, all Governments had the responsibility to look after the mental health of those who have served.

In order to recruit the next generation of soldiers, sailors and airmen and women, we need to show that we look after our service personnel and veterans.

Britain is not unique in facing this challenge. That’s why it’s vital that we discuss these issues and share best practice with our close European military partners. 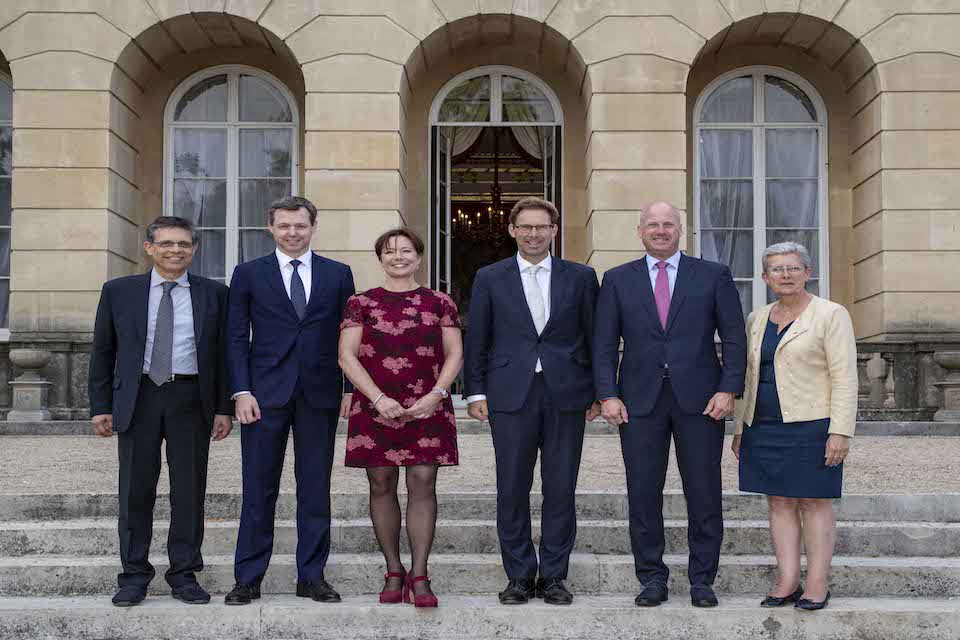 Tobias Ellwood with delegations from Denmark, France, Germany, Italy and The Netherlands.

At the recent meeting, Mr Ellwood addressed the need to counter the negative perceptions of veterans. He told the conference that while more needs to be done to help veterans, it’s unhelpful that, despite statistics which prove otherwise, many people think that service life leaves people damaged.

Figures released recently show that rates of mental disorder amongst serving armed forces personnel (3.1%) remain slightly below those of the general population (3.5%). Rates of Post Traumatic Stress Disorder also remain low, with 2 in every 1000 personnel assessed with having the disorder in 2016/17.

Every study conducted by the Ministry of Defence has also found that the risk of suicide among the Armed Forces community, including veterans of the Falklands conflict and the Gulf War, is lower than amongst the general population. The UK regular Armed Forces male rate of suicide for 2017 is 8 per 100,000. The UK general population male rate in 2016 was 19 per 100,000.

The Ministry of Defence is now spending some up to £220 million over the next decade to improve mental health services for serving personnel.

While the provision of veterans’ healthcare is the responsibility of the NHS in England and the Devolved Administrations, the MOD is working closely with all relevant government departments to make sure the unique needs of veterans are addressed.

Veterans in England, Scotland and Wales receive priority access to NHS specialist care for conditions stemming from their military service.

Last year the government created a Ministerial Covenant and Veterans Board, to coordinate and address veterans specific issues across all relevant government departments. The board will be presented with the first ever veterans strategy in the autumn

In 2017 the Veterans Gateway was also launched, providing a single point of contact for veterans, service personnel and their families to get the right information advice and support 24/7. The MOD provides £2 million to fund the helpline.

Ministry of Defence police officers share their stories and perspectives.

The Prime Minister has asked Chief of the Defence Staff, General Sir Nick Carter, to continue in his role until the end of November.

A £98.4 million contract, supporting 119 jobs, has been extended to maintain Short-Range Air Defence (SHORAD) for the British Army and Royal Marines.

Dstl will host the 23rd CWD conference, bringing together international experts to work together to achieve a future free from chemical weapons.

The Defence Infrastructure Organisation (DIO) has delivered a new headquarters and training facility at Laikipia Air Base East in Kenya.

A £180 million contract to deliver cutting edge threat detection technology for the British Army’s new Boxer vehicles will support hundreds of jobs in Scotland, it is announced today.

The UK will expand its contribution to NATO Mission Iraq, following the Alliance’s decision to scale up the crucial mission at this week’s NATO Defence Ministerial.

Royal Navy seizes £11 million worth of drugs in Arabian Sea