Chancellor’s claim about cost to UK households is based on false premise.  Trade statistics show fastest export growth for nations outside EU

George Osborne’s claim that every household would be £4,300 worse off outside the EU is shown today to be based on a false premise about the value of the Single Market to British trade.

The Treasury’s analysis of the long-term economic impact of EU membership, published by the Chancellor last month, was based on a series of assumptions about the relative advantages of various kinds of trade relationship with the EU.

These described full membership of the Single Market as most beneficial and trade conducted under WTO rules (in the absence of any trade agreement with the EU) as least beneficial.

However, this analysis is not borne out by trade statistics from the OECD and the IMF which show that, in fact, the reverse is true: exports into the Single Market from those without a trade agreement with the EU have grown fastest.

In ‘Economical With The Truth’, EU analyst Michael Burrage tackles the calculations underpinning HM Treasury analysis: the long-term economic impact of EU membership and the alternatives which was published on April 18th and used by Mr Osborne to warn of the cost to households of leaving the EU.

In that document, the Treasury suggests that EU membership has increased UK trade by 68-85% compared to what it would have been if Britain traded merely under WTO rules. The EEA relationship that Norway and Iceland has with the EU is said by the Treasury to have raised trade by 35-53% and bilateral agreements, like that of Switzerland, by 14-21%.

However, Burrage’s analysis of OECD figures shows that those nations who are not a member of the EU – and have traded with it under WTO rules – have consistently experienced stronger export growth to the Single Market since its inception in January 1993 than either the rest of the EU or Norway, Iceland or Switzerland. Britain’s rate of export growth to the EU has been lower still.

His findings suggest that access to the Single Market as a member, far from being a benefit that must be preserved at any cost, has not proved advantageous in terms of the growth of UK goods exports, and that trading under WTO rules has not been a handicap.

‘The compound annual growth rate of the exports of the UK and other EU members to each other has been lower than that of all the other countries who export to them, whatever their trading relationship with the EU might be, despite the benefits and protection provided for its members by the EU‘s tariff and non-tariff barriers,’ he writes.

‘HMT spends a great deal of time describing these barriers to warn of the fate that awaits the UK if they were to join the EEA, or the countries with bilateral agreements, or those who trade under WTO rules without any kind of negotiated agreement.

‘Contrary to what it says, the evidence shows that they have all done well, better than the UK. For the UK the figures of exports of goods are clear, it has been downhill all the way.’ 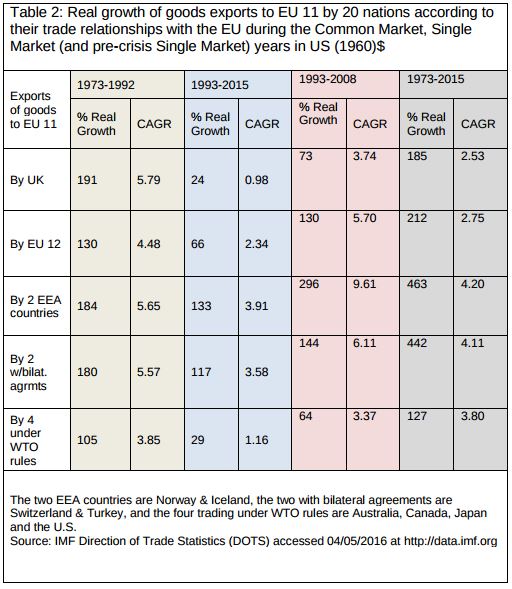 Burrage adds: ‘It is a startling, deeply depressing finding. For all the sound and the fury, the treaties and opt outs, the directives and regulations, the rhetoric and debate, for all the summits, speeches and press conferences, it turns out that the exports of EU members trading with each other have not been able to grow as fast as those of countries who have avoided the entire circus, as well as the rule-making and the membership fees.

‘It is a finding comprehensively at odds with HMT estimates of the past, present and future benefits of EU membership for UK trade.’

‘Economical With The Truth: A review of HM Treasury analysis: the long-term economic impact of EU membership and the alternatives‘ by Michael Burrage was published by the cross-party think tank Civitas on Friday May 27th.

Michael Burrage is a director of Cimigo, which is based in Ho Chi Minh City, Vietnam, and conducts market and corporate strategy research in China, India and 12 countries in the Asia Pacific region. He is also a founder director of a start-up specialist telecom company which provides the free telephone interpreter service for aid workers and others where interpreters are scarce. He is a sociologist by training, was a Fulbright scholar at the University of Pennsylvania, has been a lecturer at the London School of Economics and at the Institute of United States Studies, specialising in the comparative analysis of industrial enterprise and professional institutions. He has been a research fellow at Harvard, at the Swedish Collegium of Advanced Study, Uppsala, at the Free University of Berlin, and at the

Center for Higher Education Studies and the Institute of Government of the University of California, Berkeley. He has also been British Council lecturer at the University of Pernambuco, Recife, Brazil, and on several occasions a visiting professor in Japan, at the universities of Kyoto, Hokkaido and
Kansai and at Hosei University in Tokyo.

Economical With The Truth: A review of HM Treasury analysis: the long-term economic impact of EU membership and the alternatives

Between 2009-10 and 2019-20, we estimate that school spending per pupil in England fell by 9% in real-terms.  In the 2019 and 2021 Spending Review, the government allocated extra funding to schools and explicitly stated that this would restore spending per pupil to 2010 levels in real-terms by the end of the parliament in 2024-25. Unexpectedly high cost pressures on schools mean that the government is no longer on track to deliver on this objective.

Christopher Snowdon, Head of Lifestyle Economics at free market think tank the Institute of Economic Affairs responds to a study published in the International Journal of Behavioural Nutrition and Physical Activity claiming that Transport for London’s ban on ‘junk food’ advertising may have prevented 100,000 cases of obesity

During the July 2022 Shadow MPC meeting, the key area of debate concerned the scale of the rise in Bank rate.

The number of people with long COVID (defined as reporting symptoms more than four weeks after infection) has been on the rise – with the latest ONS figures showing that there were almost 2 million people with the condition as of May 2022, around double the number a year before.

IPPR - Leading think tank: "Levelling up was business as usual, but that has to change”

As levelling up turns three, new analysis reveals that public spending is lower in the North than England wide despite the agenda

The Bank of England must raise interest rates next month, urges IEA economist

IEA - Only 19 per cent of Brits think it’s important to be rich, finds polling