Driver who hid £1.2m of cocaine in fuel tank jailed

A van driver who attempted to smuggle cocaine worth £2.4 million into the UK hidden inside his fuel tank has been jailed. 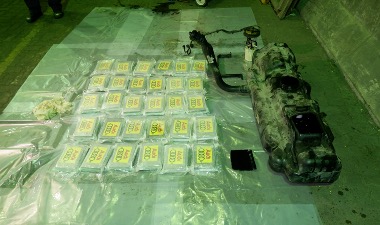 Ernestas Rekstys, 34, from Lithuania, was investigated by the National Crime Agency after he was stopped at the port in Dover on 16 October.

The packages of drugs were found after Border Force officers noticed an anomaly when they scanned Rekstys’ vehicle.

When the fuel tank was removed, packages containing a white powder were seen floating inside. A total of 30 kilos was removed and found to contain cocaine.

NCA forensic experts estimated the cocaine would have been worth up to £2.4 million at street level.

In interviews with NCA investigators Rekstys initially claimed to have borrowed the van and denied knowledge of the drugs, however he later changed his story and pleaded guilty to being involved in the importation of a controlled drug at Canterbury Crown Court on 15 November.

He was jailed for nine years and nine months at the same court today (30 November).

“This was a significant amount of cocaine and the profits from this importation would only have caused further criminality when distributed.

“The NCA will continue to work with our partners including Border Force to stop the smugglers who work for organised crime groups intent on bringing drugs into the UK.”