Halton Mark Anthony Powell, 44, has been sentenced to two years and four-and-a-half months after pleading guilty to supplying articles for use in a fraud at Southwark Crown Court on 11 November 2022. 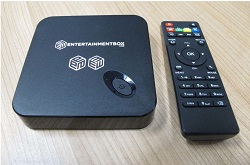 The City of London Police’s Police Intellectual Property Crime Unit and the CPS uncovered, after an internal investigation by Sky, that Powell sold set-top boxes which were capable of allowing the end-user to watch premium, subscription-only television content without paying the necessary fee to the providers of that content. The set-top boxes were sold through his business premises, Ebay and the company websites.

Powell admitted to supplying Internet Protocol Television (IPTV) boxes which is a process enabling the receipt of streaming services through websites, without the use of a satellite. IPTV boxes are also known as set-top-boxes.

Evidence from Sky estimated the potential loss to the company was £13,826,460.

Further evidence gathered by the police and the CPS showed that, in order to continue defrauding Sky and avoid being caught, Powell’s Droidsticks company went from openly selling fully loaded boxes to referring potential customers to a private forum to discuss purchase and the use of the boxes.

“Powell was ruthless in exploiting new emerging technology and software to potentially deprive Sky TV of more than £13million from selling set top boxes that gave away premium copyrighted content for free.

“He was devious in his subsequent efforts in providing instructions to customers to show how to set up the boxes and to provide answers to questions about this fraudulent activity.

“We will commence proceedings for confiscation orders against any available money and assets from this crime.”

“Powell attempted to hide the illegitimate nature of his business by concealing evidence that he was selling products pre-configured to stream Sky Sports and Sky Cinema. However, PIPCU officers were able to prove he was aware the set-top boxes were being used for this purpose by thousands of customers.

“It is vital to remember that watching premium content without a subscription is illegal - and enabling access to it can land you with a criminal record, as this case shows.”

The CPS is committed to working with law enforcement agencies to stop activities of cyber criminals and bring them to justice.

Mason Greenwood was charged in October 2022 with one count of attempted rape, one count of controlling and coercive behaviour and one count of assault occasioning actual bodily harm.

Nick Price, Head of the CPS Special Crime and Counter Terrorism Division, said: “The CPS has authorised Counter Terrorism Police North East to charge a man with a terrorism offence after he was arrested outside St James's Hospital in Leeds last Friday (January 20).

An ex-employee of the Crown Prosecution Service pleaded guilty yesterday (19 January 2023) to the misuse of computer systems while working for the organisation.

Today the CPS has published the Q2 performance data which covers the three-month period from 1 July to 30 September 2022.

An accountant who was jailed for defrauding the NHS, companies and individuals, has been ordered to pay back nearly £240,000 and faces an additional 20 months in prison if he fails to pay.

A Metropolitan Police officer who degraded, raped and sexually assaulted women has today admitted his crimes.

A former West Yorkshire Police employee has been ordered to pay back £59,816.24 in compensation after stealing money from Huddersfield police station’s evidence locker.

A former Premier League star was jailed yesterday (12 January 2023) for defrauding friends, family members and associates out of £15 million.