Ofcom’s Media Nations: Wales report reveals that people in Wales spent an average of 5 hours 6 minutes per day in front of a television in 2020, up by 40 minutes compared to 2019.

The bulk of this time was still spent watching broadcast TV (3 hours 29 minutes), up by 8 minutes compared to 2019.

However, much of the rise in total viewing came from non-broadcast services on the TV set, including YouTube, gaming, and streaming services like Netflix and Amazon Prime Video, which increased by 50% since 2019 to 1 hour 26 minutes.

Viewing of these services surged with the introduction of the first lockdown in March 2020 and while this reduced as restrictions eased, they rose again towards the end of the year, peaking in December 2020 at 1 hour 51 minutes a day – 68% higher than a year earlier.

2020 was a landmark year for subscription video-on-demand (SVoD) services. UK-wide, subscriptions to streaming services climbed by more than 50% to reach 31 million, up from 20 million in 2019.

More than half of households in Wales (59%) now have at least one subscription video-on-demand (SVoD) service from companies such as Netflix, Amazon, Disney+ and Now TV. 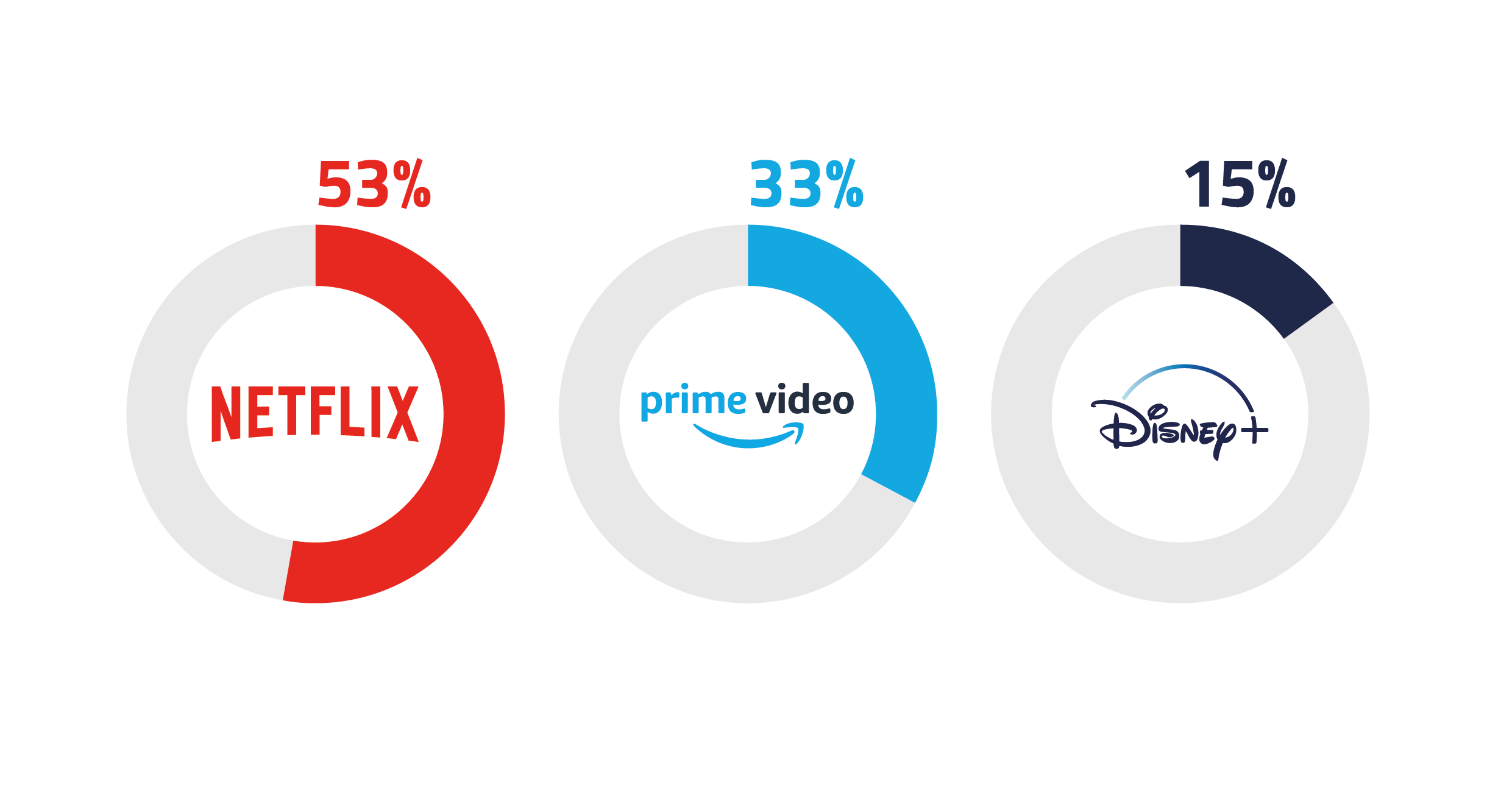 Netflix is still the largest, with more than half (53%) of households having a subscription, followed by Amazon Prime Video (33%) and Disney+ (15%).

News viewing surged during the pandemic

Elsewhere, the report shows the pandemic affected all aspects of broadcasting in Wales in 2020.

News viewing across the UK increased as the public sought information on the unfolding pandemic and changing government restrictions. In Wales, the average audience share of BBC One’s early evening Wales Today programme was 33.2%, up from 25.5% in 2019. The average audience share of viewing of the ITV Cymru Wales at Six news programme was higher still, at 23.4%, up from 21.7% in 2019.

TV is the go-to place for news with BBC One and ITV Cymru Wales the two most used news sources, ahead of Facebook.

I’m A Celebrity… Get Me Out of Here! most-watched TV programme in 2020

I’m a Celebrity… Get Me Out of Here! was the most-watched programme of 2020 in Wales. The opening episode of the show, airing on ITV Cymru Wales from Gwrych Castle in Abergele, achieved an average audience of 1.03 million (a 56.3% share of viewing).

The Prime Ministerial Statement of 10 May, in which the UK Prime Minister announced a provisional roadmap for the easing of restrictions, was the second-most-viewed TV programme, with an average audience of 861,000. The announcement of the lockdown in a BBC News Special a few weeks earlier on 23 March was also in the top five.

Spending on programming for and from Wales

Radio continues to be popular in Wales, with more than eight in ten people tuning in every week.

The past year has also seen a big surge in smart speaker ownership, with nearly six in ten homes in Wales now having them (57%). Listening to music via a streaming service like Spotify (70%) and listening to a live radio station (61%) were the most popular reasons given by users in Wales for using smart speakers. DAB radios are another important way for people to listen to radio – 40% of households in Wales have a DAB set in their home, compared to 39% in Scotland and 36% in Northern Ireland

“During what was a difficult year for so many people broadcast television provided an invaluable service to audiences in Wales. From information about the pandemic and the restrictions put into place to keep us safe, to entertainment programming that helped fill the void created by the lack of so many face-to-face activities, broadcast television in Wales saw an average increase of 40 minutes per week.

“But it was also a year of significant growth for subscription video-on-demand (SVoD) services and more than half of households in Wales (59%) now have at least one subscription video-on-demand service from companies such as Netflix, Amazon, Disney+ and Now TV. These new entrants to the sector bring innovation and new sources of funding for creative content, but they also create challenges for Wales’ traditional media outlets.”

Two thirds of teens and young adults have recently encountered at least one potentially harmful piece of content online, but only around one in six go on to report it, Ofcom has found.

International Women in Engineering Day – hear from one of our colleagues

Yesterday was International Women in Engineering Day, an event aimed at giving a profile to women engineers around the world and to highlight their under-representation in their professions.

BBC must transform the way it serves audiences, Ofcom warns

The BBC must be much more open and clear with audiences about how it handles their complaints, responds to concerns and meets viewers’ and listeners’ needs, Ofcom warns today.

An Ofcom investigation has found Channel 4 breached the conditions of its broadcast licence following an extended outage of its subtitling, signing and audio description services.

Telecoms customers must be provided with clearer and simpler information before they sign up to a new deal, under new Ofcom rules that come into force today.

Claire Levens, Ofcom’s Head of Media Literacy Policy, outlines why our research into the most effective ways of boosting media literacy in local communities is crucial.

Ofcom is helping pave the way for a revolution in commercial services delivered by drones, under a new licensing regime proposed today.