Since April, the world-renowned UK Armed Forces have deployed thousands of personnel at short notice to support Coronavirus Testing. They have worked alongside NHS staff and civilians at both Regional Sites around the country and in Mobile Testing Units, helping to deliver more than 6 million tests.

The Mobile Testing Units played a vital role in helping essential workers, who were most vulnerable to the virus, access tests. The unit was designed by British Army engineers in just 7 days. Since the programme began, more than 2,700 service personnel have run 218 mobile testing units, working nearly 1 million hours to conduct more than 700,000 tests around the country. Now the Armed Forces will train civilian contractors to continue this essential role.

Thousands of our Armed Forces personnel – regular, reservists plus supporting civilians – stepped up to serve on the front line in the fight against coronavirus.

The four month mission of those on the national testing programme helped to carry out more than six million tests, with 218 military Mobile Testing Teams deploying around the country as needed. This is an extraordinary effort.

As those teams now train civilian contactors to continue the work I want to say a huge thank you to our Armed Forces for doing what they do best and supporting the nation’s resilience in a time of crisis. 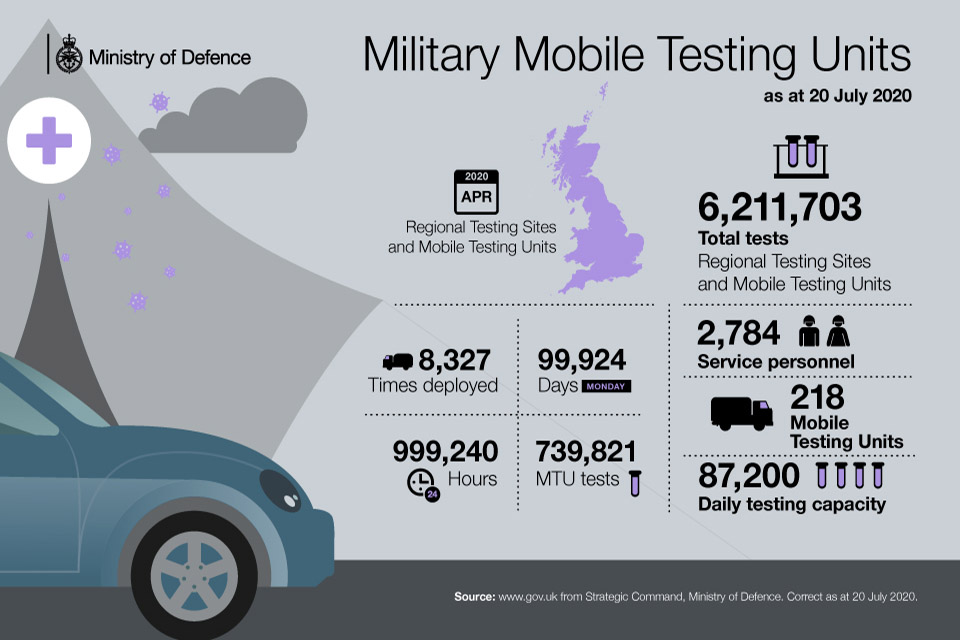 I am incredibly proud of our servicemen and women who designed and deployed with the Mobile Testing Units across the United Kingdom and provided the public with professional and efficient testing facilities. We are delighted to be able to support and complement the testing centres established by the NHS and will continue to deliver on any request for assistance in the fight against the Coronavirus.

In Northern Ireland, mobile testing units have been civilian operated from the outset. The handover process has now begun in England, Scotland and Wales.

Four contracts will deliver repairs and maintenance services across the UK defence estate, supporting thousands of UK jobs over the next seven years.

UK troops will continue to contribute to the NATO Mission in Kosovo (KFOR) until at least 2023.

Defence Secretary Ben Wallace has met with counterparts from Italy and Turkey on board HMS Queen Elizabeth during his first visit to the Carrier Strike Group since its departure from Portsmouth in May.

UK and US Strengthen Security Cooperation over Emerging Threats

Military homes at RAF Waddington, including that of Chf Tech Brindley and his family, are being refurbished thanks to additional Government funding.

An F-35B Lightning aircraft has landed onboard the Royal Navy’s latest aircraft carrier, HMS Prince of Wales, for the first time.

Work is well underway on a new training facility which will secure HMNB Clyde as the central base for submariners in the UK.