How British Swimming Dives into Data Analysis with Intel

Team GB’s elite swimming team is focused on success in global competitions. These include the Olympic Games Tokyo 2020, the next European Championships and the World Championships in 2022. In competitive swimming, time is of the essence and Team GB’s data-led strategy, powered by Intel® technology, is making every fraction of a second count.

Big data is a topic that touches most digital businesses, and in the world of elite sport, data is equally important. Historical performance, current form and future potential can all be analysed and visualised to coaches and athletes. In turn, that data can unlock tiny but incremental improvements. At the pinnacle of global sport, these small improvements might make the difference between a gold medal winner and a runner-up.

Olly Logan is the Analysis Lead for Biomechanics, Race Analysis and Skill Acquisition at British Swimming. He has seen the use of data in sport change dramatically. “I've spent 15 years working in elite sports,” he says, “so clearly technology has come on leaps and bounds. But it’s probably more accessible now.

“While a lot of the metrics that we would want to capture have been possible [to capture] for a while, we can now do more with them. The ease of integration across different systems and then getting [the data] back to the end user - the coach and the swimmer – is more streamlined. Where [analysing and processing data] might have taken two hours, now maybe it takes an hour. But there’s still a manual element to it.”

The British Swimming data analysis system is in use in key UK training centres, one in Bath and one in Loughborough. Raw data from sensors and HD cameras at the pools is captured by an Edge computing solution developed by Sheffield Hallam, UK Sport and EIS, powered by an Intel® Xeon® E5 Processor. That data is then mirrored to Xeon in the cloud and also made available for immediate analysis on mobile workstations running Intel® Xeon® E3 and W CPUs.

Live training data is captured in several ways. These include a range of in-pool pressure sensors and velocimeter devices worn by the swimmers. British Swimming also uses a proprietary starting block that can measure 1,000 data points per second.

Training data is also gathered by an array of Full HD video cameras. There are 10 fully-synchronised cameras at the National Centre for Swimming based at Loughborough University. Four of these are located underwater and four are mounted in the roof looking down on the pool. There is also a side camera to track starts, plus one rear camera for recording starts/head-on shots. 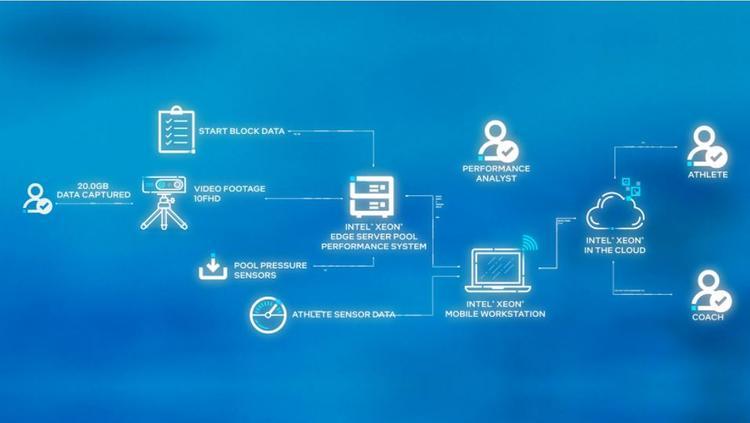 The camera data is crucial, providing a set of visual cues to go with the other sensor data. It also enables Olly Logan’s team to perform extremely sophisticated 3D biomechanical analysis of a swimmer’s body positions, even when they are underwater. Processing the raw footage at speed is vital, as is secure storage and the ability for immediate replay.

Dave Hemmings, a British Swimming coach, believes that the breadth of data from the cameras is a vital component of training regimes. “A significant improvement for our athletes has been the different camera angles,” he says, “ especially the overhead camera that gives you a completely different technical perspective. Certainly from a breaststroke perspective, [the cameras] have helped us make huge technical improvements. We can see things that you can't see with the naked eye or from previous camera angles.”

Team GB swimmer Anna Hopkin agrees. “We use the camera system in training a lot, which means we can look at and really pick apart dives and turns, and our stroke as well. And it's also really helpful to get all the data after we've raced. So, we can see where we may have gained or lost time. Then we can compare [our individual performances] to the best in the world, so we know where to improve.”

Olly Logan is keen to highlight the value of being able to visualise large datasets. “A big thing for me is, once you get a dataset, [it’s important] to just explore it and understand the details. Where automation or machine learning might pick an outlier and exclude it, that outlier might have meaning or context or a reason behind it. So, it's understanding the complete story of the data. Our role is to take information, understand what it means, and then read that story back to the coaches and athletes.”

The British Swimming Biomechanics, Race Analysis and Skill Acquisition team is at pains to be clear that data doesn’t make decisions for you. Instead, it informs the decisions that coaches and swimmers can make and there are pure-data techniques that are having a direct impact on Team GB’s swimming strategies.

Olly Logan gives a fascinating example. “A specific example that's really relevant for me right now is in the relays, which are a really strong medal opportunity for us. The big thing in the relays is relay team selection. You want a heats team that gets you into the final, but you don't want to use all your best swimmers. You want to try and use them in the final when they're fresher. So, it's a balance of choosing the heat team that gets you through to the final in a good lane, versus choosing a team that is not going to get to the final.

“So we've developed a [performance analysis] tool and created data sets, taking all the splits from all the countries, and then creating a prediction based on those. So, we can model what happens if we choose these X swimmers for the heat team, where that ranks us, and it informs the thought process of the coaches and the selectors to make the right decision.

“The result should be that we can decide team X would be good enough to make the top four in the heats and get us through the final. So, we can save [key swimmers] for the final, subsequently swimming a faster time. So that's the kind of discussion that we’re having and where data analytics is helping us make better decisions.”

The future success of Team GB’s swimming team depends on a world-class training regime, backed by data-led strategic thinking. Intel is providing the technologies to do that job, helping the British Swimming Biomechanics, Race Analysis and Skill Acquisition team visualise and model future performance to a highly granular and accurate level. It’s an incalculably valuable asset both today and into the future.

To read more about how British Swimming and Team GB uses Intel technology and data analytics to improve performance, download the case study.

techUK's Farzana Chowdhury writes about how government, industry and academia need to work together to ensure that opportunities within HPC are joined up. For techUK's #FutureofCompute Week 2022

techUK and TECHNATION Canada have today published a joint statement on the ongoing UK-Canada FTA negotiations.

Why is HPC important for the UK to become a science and technology superpower?

High-performance and large-scale compute is a key part of the UK’s ambition to remain a world leader in science and innovation.

During this week techUK will be sharing industry-led insights on what unlocking the potential of large-scale compute (HPC, exascale and other supercomputing infrastructure) could mean for the UK’s society and economy.

In less than two weeks techUK are hosting our sixth Digital Ethics Summit, an annual opportunity to reflect on the major ethical questions facing the tech industry. Sue Daley, Director of Tech & Innovation, shares what we should expect this year.

After agreeing to a data adequacy agreement in principle in July 2022, the UK government has completed its full assessment of the Republic of Korea’s personal data legislation.

How do your equality, diversity and inclusion (EDI) practices stack up?

WithYouWithMe has partnered with YouGov to undertake research into the ED&I practices of UK organisations - and uncovered some surprising results.

The UK Government has secured £1.84 Billion of investment for the UK space sector at the latest meeting of the ESA Council of Ministers in Paris.

The question of interoperability in the Metaverse

Joshua Bates, TMT Associate at Global Counsel writes about the implications of ownership, security and interoperability in the metaverse