The work of the NDA depends to a large extent on the “social licence” afforded to us by a range of external stakeholders. As we all know, decommissioning 17 complex sites across the UK throws up a wide range of social, environmental and technical issues for nuclear communities and other organisations interested in what we do.

The job of the stakeholder relations team is to provide the right platforms and opportunities for a strong dialogue between these stakeholders and the NDA, to ensure our mission is understood, and to underpin effective dialogue around these issues.

As part of our work we conduct an annual survey using an independent and highly-respected general public polling company, Opinion Research Services (ORS). They conduct the survey on our behalf using a combination of telephone interviews and analysis of completed on-line questionnaires.

This gives us independent feedback on how stakeholders perceive our progress, on how we engage, and on what the NDA could do better.

The 2020 NDA Stakeholder Survey differed from previous years in that only two main groupings of stakeholders were asked to take part. Our key stakeholders, including people we regularly engage with such as local council representatives, local community leaders, regulators, government representatives and officials from devolved administrations in Scotland and Wales, make up this group.

The second group are self-identifying stakeholders. These are members of the general public who are interested in our activities, and who have subscribed to our publications and news feeds. Typically, we will communicate with this group regularly by sending out electronic updates, rather than meeting with them face to face, as we do with key stakeholders.

Previous surveys had also included a third grouping - Site Licence Companies. But as part of our developing One NDA philosophy, plans are being implemented to include their feedback in a new One NDA survey in 2021.

In total 45 key stakeholders and 593 other stakeholders took part in the survey. All 638 interviews and surveys were completed between January and April 2020. 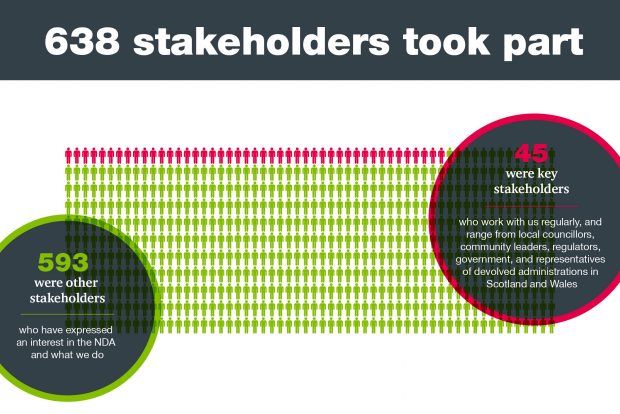 The results of the NDA 2020 Stakeholder Survey show some positive progress in external stakeholder’s views of the NDA’s mission, and in its strategic approach.

For instance, some 96% of key stakeholders say they understand the NDA’s role and mission, along with 82% of other stakeholders. This shows a positive trend over the past three years of surveys for these groups.

Every key stakeholder that responded (100%), and 81% of other stakeholders think NDA is essential in being an independent coordinator with strategic oversight, controlling the UK’s decommissioning sector.

Specific individuals within the NDA were commended for their professionalism, knowledge, passion, openness and transparency.

The Stakeholder Relations team was singled-out for praise by some stakeholders - some of the most positive results in the survey related to NDA improving its close relationships with key stakeholders in terms of engagement. Moreover “a recommendation from the 2019 research was for the NDA to target stakeholder engagement, and since last year perceived effectiveness levels have increased”, according to Opinion Research Services’ (ORS) independent analysis of the results, compared to last year.

The NDA’s record in stimulating socio-economic benefit for and engaging with local communities and stakeholders more widely were also raised as key strengths, as was One NDA, for aiming to facilitate collaborative working and common purpose across the industry.

Most key stakeholders (82%) felt the NDA has made good progress towards its mission, as did around half of other respondents (51%).

Positive feedback from the key stakeholders grouping has improved noticeably since the 2019 survey, and feedback from other respondents has roughly stayed the same.

The opinion of key stakeholders has grown significantly more positive in rating the NDA’s performance in these important areas.

When asked “is the NDA open and transparent with stakeholders”, 78% of key stakeholders agreed, compared to 68% in 2019. There was a smaller positive rise to 52% among other stakeholders.

There was a positive rise on the question on rating the NDA’s leadership. Some 64% of key stakeholders said they have confidence, compared to only 51% in 2019. 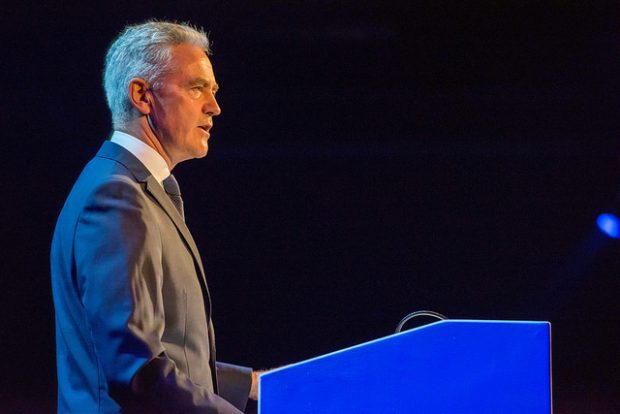 What the NDA could do better

The 2020 Stakeholder survey also revealed some clear criticisms and negative commentary from stakeholders. This included:

Overall, many of the findings were more positive than 2019. The perceived effectiveness of NDA stakeholder engagement rose across all stakeholders from 59% to 64%. However, there were some areas such as innovation and supply chain, where there were lower, or static rates of approval for the NDA’s approach. Stakeholders challenged the NDA’s record on providing value for money for the stakeholder, and felt best practice wasn’t being demonstrated in some situations.

How we could use the feedback to improve

Our approach to stakeholder engagement is seen to be improving – but it’s definitely not perfect. The NDA needs to work to underpin the better relations it has now established with key stakeholders, and also needs to think more creatively about engaging with the general public who show an interest in our work.

Further clarity on our One NDA philosophy is of equal interest to external stakeholders as it is with our own staff – this is often overlooked. We must capitalise on this opportunity to clarify the narrative around our group approach to people outside the organisation.

Finally, on a personal note, I’d like to take this opportunity to again thank all stakeholders who took part in our survey. Your time and commitment is very much appreciated. We look forward to engaging with you going forward, and hope that you may consider playing a valuable part in future surveys, to help shape our approach to engagement going forward.

We welcome interest from smaller businesses and nuclear newcomers

Hazel Blears has been appointed as the Nuclear Decommissioning Authority’s Social Value Specialist.

The Nuclear Decommissioning Authority (NDA) has today launched a year-long partnership aimed at inspiring and supporting young people in the nuclear industry.

The ‘reactor in-core inspection desk’, which was used to remotely check conditions deep inside the reactors at Sizewell A Site, was last used in 2005 just before the site stopped generating electricity.

NDA calls for people to ‘have their say’ on its Strategy

Three new R&D contracts, worth up to £25million, have been awarded to look for innovative solutions to the technical challenges of delivering the NDA’s decommissioning mission.

Beyond Sellafield: Investing in the next generation