Man admits smuggling 60 guns into the country in his car

A man who was found with 60 firearms in his car has admitted gun smuggling, after a National Crime Agency investigation. 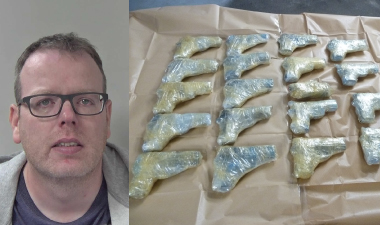 Irish national Robert Keogh, 37, was stopped at 5am on Friday 2 August this year by Border Force officers at the Port of Dover en route from Calais.

He told officers he was returning from Europe and had “just been driving around”.

An initial search of his car, a Volkswagen Passat, recovered a Turkish manufactured Zoraki blank firing handgun, with its barrel converted to fire live ammunition. The gun was concealed in the car’s rear-left quarter panel.

The NCA adopted the investigation.

He will return to court for sentencing on the 11th October.

In interview, he told NCA officers that he had a 3,000 Euros gambling debt.

He said he didn’t know there was anything secreted in the car on the return journey.

“We have deprived an organised crime group of a huge haul of firearms and significantly disrupted their plans.

“These weapons would have been moved onto the criminal market and into the hands of extremely dangerous offenders.

“Although the UK’s level of gun crime is one of the lowest in the world, firearms pose massive potential for harm making their criminal use a priority for the NCA and wider UK law enforcement.

“We work at home and abroad to prevent the flow of guns trafficked to the UK and Border Force is a vital partner in our work to protect the nation.

“This seizure is a great example of that partnership working.”

“Keogh had made use of hidden spaces to conceal a significant number of firearms. The first gun was found within an hour, but it took several hours for my officers, who are all highly trained to conduct technical vehicle searches, to recover the remaining 59 weapons.

“By making this detection Border Force not only kept all of these lethal weapons off the UK’s streets, keeping people safe and protecting lives, but also took the vital first step in securing his guilty plea.

“We will continue to work with our law enforcement partners at the NCA to bring offenders like Keogh to justice and to disrupt the workings of organised criminal groups in the UK.”