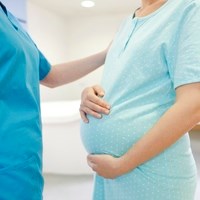 NICE is recommending a new test in pregnancy that could mean up to 40,000 women could avoid unnecessary medicines.

The test analyses the baby’s DNA found in its mother’s bloodstream to establish what blood group it is – if it’s different to that of its mother it can cause serious complications.

Currently all women whose blood tests show they are rhesus-D negative are given an injection of anti-D immunoglobulin to reduce the risk of potential problems in future pregnancies.

But only those whose baby is rhesus-D positive actually need it. However until now there has not been a reliable way of testing the rhesus status of the baby before it’s born.

By ensuring anti-D immunoglobulin, is only given to women who need it, the test has the potential to protect stocks of this finite resource and save the NHS more than £500,000 each year.

It could also spare around 40,000 women who currently receive anti-D when they do not need it because they are rhesus-D negative and so is their baby.

Anti-D immunoglobulin is derived from donated human blood and as such carries an unknown potential risk of passing on diseases that cannot currently be screened for. NHS Blood and Transplant has a number of safety measures in place which are designed to reduce to a minimum the risk of transmitting infection through blood transfusions.

Women who are rhesus-D negative are missing a substance called D antigen on their red blood cells. If they become pregnant and their baby is rhesus-D positive (has the D antigen on their blood cells), blood cells from the baby that transfer into the bloodstream of the mother can cause the mother’s immune system to produce antibodies to the baby’s blood, a process called sensitisation.

The first pregnancy is not usually dangerous but if a second baby is also rhesus-D positive these antibodies can attack the blood cells of the unborn baby.

This condition, called haemolytic disease of the fetus and newborn, affects about 500 babies each year in England and can cause the stillbirths, disability or death from anaemia and jaundice.

Giving anti-D immunoglobulin to all mothers who are rhesus D-negative prevents sensitisation by mopping up the baby’s red blood cells before the mother’s immune system detects them.

The new test analyses DNA from the fetus, taken from the mother’s blood during routine antenatal appointments, to establish the rhesus status of the baby.

The test, called  High-throughput, non-invasive prenatal testing (NIPT), was developed by NHS Blood and Transplant. It is performed during routine antenatal appointments.

In current practice, women who are rhesus D-negative have the rhesus-D status of their baby determined after it is born usingblood from the umbilical cord.

Professor Carole Longson, MBE, director of health technology assessment at NICE said: “Since the adoption of routine anti-D prophylaxis, deaths as a result of severe haemolytic disease are very rare.

“The test could also allow women who are rhesus-D negative and carrying a rhesus-D positive baby to make an informed choice about whether to have anti-D prophylaxis.

“This may lead to better adherence as these women know that if they do not have anti-D prophylaxis there is a risk of problems in future pregnancies. This in turn may reduce the number of sensitisations and haemolytic disease in subsequent pregnancies.”

From April 2013 to March 2014 there were 646,904 births in England (NHS Maternity Statistics), of which approximately 100,000 were to women who are rhesus-D negative. About 40,000 of these women carried a rhesus-D negative fetus and therefore do not need treatment with anti-D immunoglobulin.  D-negative status occurs in about 15% of people of white European family origin, about 3% to 5% of people of black African family origin, and is very rare in people of Eastern Asian origin.