Met Office takes a leading role in an initiative that will bring together funding, knowledge and demand to save lives, protect livelihoods and improve efficiency and effectiveness of responses to weather and climate disasters.

The Risk-informed Early Action Partnership (REAP) has been launched at the United Nations Climate Action Summit in New York. REAP is an initiative combining expertise from across the climate, humanitarian and development communities with international funding and demand for services. Over 30 nations and organisations including the United Kingdom, World Meteorological Organization (WMO), International Federation of Red Cross (IFRC) and United Nations Development Programme (UNDP) have signed up to the partnership.

In the past 20 years, 4.5 billion people have been affected by disasters, 90% of which are caused by weather and climate-related events. With a warming climate, instances of severe weather are likely to increase around the globe, making it ever more important to streamline the support available to vulnerable nations.

Through sharing best practice, lessons learned and expertise, it is expected that existing programmes and initiatives, which aim to address challenges concerning climate risk, will be better coordinated, scaled and therefore impactful. The Met Office is a co-author of the partnership and will have a representative on the technical management board. Many of the international programmes the Met Office oversees on behalf of UKaid will also be used to deliver the targets around the globe.

“This is an important step forward in bringing together the global effort to save lives end ensure sustainable livelihoods. By managing the demand and funding for ground-breaking climate early warning and action programmes, we can ensure that the greatest number of people possible around the world benefit.

“The target is for REAP to make one billion people safer from weather and climate-related disasters by greatly expanding early action mechanisms, improving early warning systems and the capacity to act on the risks they identify. This will save lives, protect livelihoods and improve the efficiency and effectiveness of response.”

Although there are already notable efforts internationally to improve early action to reduce the impact from weather and climate disasters, there is still more to do. There has been an increase in funding for programmes but this is often fragmented. REAP seeks to fill that gap, bringing together existing international climate, humanitarian and development programmes to better coordinate and consolidate efforts by all stakeholders for the benefit of committed nations. This will leverage increased financial contributions, improve the way money is spent and combine and monitor targets. 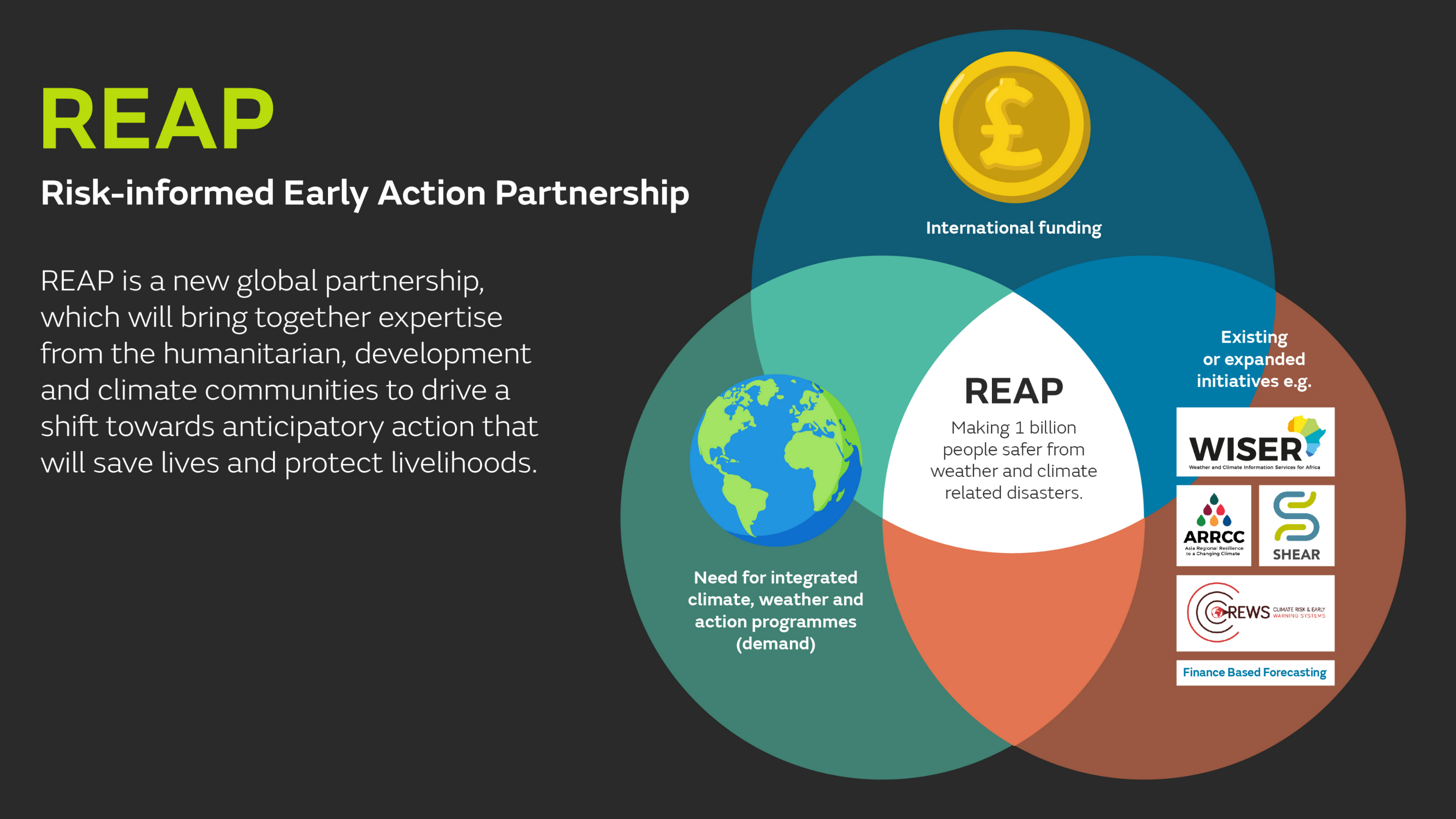 Existing projects that will come under the umbrella of REAP such as the Weather and Climate Information Services for Africa (WISER) programme are already having real-time benefits for communities around the globe. WISER has, for example, supported the development of daily forecasts and maritime hazard warnings in Kenya for Lake Victoria, along with forecasts covering an area 50km from the shore. Not only has this saved lives of fishermen using sailing boats, but the wind forecasts are also improving catches as gusty winds stir up nutrients bringing fish to the surface. Elsewhere rain forecasts in Kenya have improved seed germination of arable crops, resulting in small-scale farmers claiming an increase in agricultural production of up to 20%.

REAP will strengthen efforts in countries to develop early warning systems linked to early action, contributing to scaling up or building on for example the CREWS initiative, and DFID-funded WISER and ARRCC programmes.

The hot weather will continue across the UK, with heatwave conditions for many, creating ideal conditions for thunderstorms which will bring heavy rain and increasing risks from flash flooding, lightning and hail..

It’ll turn hot across England and Wales over the next few days as a heatwave develops across southern and eastern areas, with exceptionally high temperatures continuing next week.

Hot spell on the way later this week

After an unsettled start to the week in places, it will turn drier and much warmer across many parts of the UK later this week, with hot conditions developing across southern areas.

July 2020 was looking to be a fairly unremarkable month in terms of climate statistics for the UK, until hot conditions closed the month on the 31st.

The sixth report in the State of the UK Climate series confirms that 2019 was the 12th warmest year in a series from 1884.

How predictable are European winters?

Most of the UK is now benefitting from a brief spell of very warm weather. Temperatures are expected to peak on Friday before quickly cooling down over the weekend.

A week of two seasons will close out July. After a wet and windy start to the week, conditions across the UK will settle down with a hot day for most on Friday.