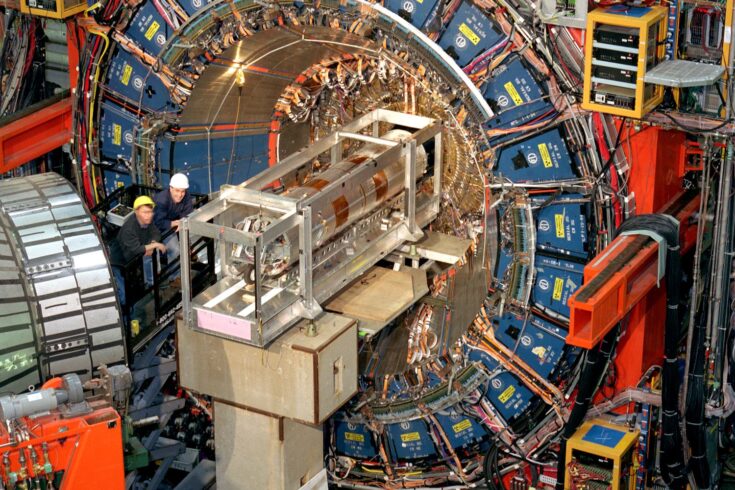 The CDF recorded high-energy particle collisions produced by the Tevatron collider from 1985 to 2011. About 400 scientists at 54 institutions across 23 countries are still analysing the wealth of data collected by the experiment (credit: Fermilab).

Scientists of the Collider Detector at Fermilab (CDF) collaboration, including many from the UK, have measured the mass of the W boson, one of nature’s force-carrying particles.

The measurement does not match the value expected based on the Standard Model of particle physics.

This suggests that there may need to be new, as yet undiscovered, pieces to be added to the long-standing theory.

The CDF collaboration at the Fermi National Accelerator Laboratory (Fermilab) in the US announced the result today after 10 years of painstaking analysis.

Using data collected by the collaboration, scientists have now determined the particle’s mass with a precision of 0.01%, twice as precise as the previous best measurement.

This new mass measurement is different to the result expected when scientists work out the mass using the theory outlined in the Standard Model.

The team used data collected from the experiment’s run which started in 2003, through to when it stopped taking data in 2011.

The Science and Technology Facilities Council (STFC) funded CDF from 2000 to 2012, enabling this result.

Results like this demonstrate the hidden effort of science, the years of careful number-crunching to progress closer to a new understanding.

Physics beyond the Standard Model can come in careful iterations, edging us towards exciting new answers.

STFC proudly continues to support UK scientists in the hunt for physics beyond the Standard Model in experiments including the Large Hadron Collider and others around the world.

The CDF measurement was performed over the course of many years, with the measured value hidden from the analysers until the procedures were fully scrutinised.

When we uncovered the value, it was a surprise.

Although the new value matches up with some previous W boson mass measurements, there are also significant disagreements compared to previous results.

More measurements are needed to confirm the finding.

The W boson is a messenger particle of the weak nuclear force and it is responsible for the nuclear processes that make the sun shine and radioactive-particles decay.

CDF researchers have worked on achieving increasingly more precise measurements of the W boson mass for more than 30 years.

This result uses the entire dataset collected from the second run of the Tevatron collider at Fermilab.

It is based on the observation of 4.2 million W boson candidates, about four times the number used in the analysis the collaboration published in 2012.

The CDF collaboration comprises 400 scientists at 54 institutions in 23 countries, including the UK.

Professor Mark Lancaster, who was the principal investigator of CDF in the UK from 2002 to 2012, said:

The UK university groups at Glasgow, Liverpool, Oxford and UCL have played a significant role in CDF for many years.

Such precise measurements require long periods of painstaking work: this result is the culmination of 30 years of honing the measurement techniques.