Significant milestone as keys are formally handed over to the Scottish Secretary.

The opening of the new flagship UK Government hub in Edinburgh moved a step closer today [13 June 2019] when the property developers Artisan Real Estate formally handed over the keys of the building to Scottish Secretary David Mundell.

The new Hub, located near Waverley Station in the heart of Edinburgh, is a seven story, 190,000 square feet, ultra-modern office space. It will bring together nearly 3,000 UK Government civil servants from a range of UK Government departments.

Due to open in Spring 2020, the Hub will improve the work of the UK Government in Scotland, helping them deliver better services for Scottish people. It will enable closer collaboration between departments, smarter working, and use of the latest technology. The Hub will incorporate a Cabinet Room, allowing the UK Government Cabinet to meet in a purpose built room, the first time such a facility has been available in Scotland.

“I am delighted to receive the keys to the new UK Government Hub in Edinburgh. The formal handover of the building’s keys is an important milestone, demonstrating we are making real progress towards opening the flagship building in the heart of Edinburgh next year.

“The building will bring together some 3,000 UK Government civil servants, helping them deliver high quality services for people across Scotland. I very much look forward to inviting the Cabinet to meet in the building once it is open for business.

“The Edinburgh Hub is a great example of the UK Government’s extensive support for the capital’s economy – which we are also driving through the ambitious Edinburgh and South East Scotland Growth Deal.” 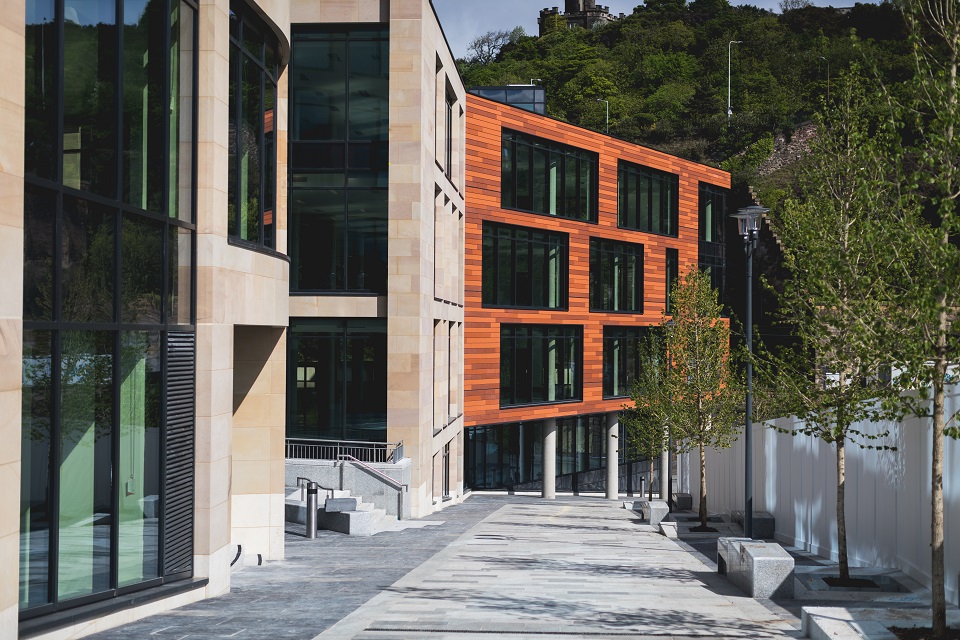 HM Revenue and Customs (HMRC) is delivering the Edinburgh Hub on behalf of the UK Government, and will be based there when the first teams start to move in from April 2020.

Developers Artisan worked hand in hand with construction partners McAleer & Rushe and designers Allan Murray Architects to deliver the Hub ahead of time and on budget.

Mr Mundell was joined at the key handover by:

Work is also underway on a first Glasgow Hub, with a second one to follow. The Edinburgh and Glasgow Hubs are a key part of the UK Government’s commitment to delivering excellent public services for people in Scotland, building a strong Civil Service outside London and leading the way in regional regeneration. Across the UK it is estimated that the UK Government Hubs programme will save more than £2 billion of public money over twenty years, relocating civil servants from existing, often fragmented office locations, to modern, cross-departmental workplaces.

HMRC advice for people choosing to give up their income to support their business or donate to charity during the coronavirus (COVID-19) pandemic.

Employers will be able to make claims through the Coronavirus Statutory Sick Pay Rebate Scheme from 26 May.

New measures announced yesterday will give vital support to frontline NHS staff battling COVID-19 and support businesses under pressure as a result of the coronavirus outbreak.

People who can't work their normal hours because of coronavirus (COVID-19) will still receive their usual tax credits payments.

HMRC will begin contacting customers who may be eligible for the government’s Self-Employment Income Support Scheme (SEISS).

HMRC to accept service of legal proceedings by email

The service of new legal proceedings and pre-action letters on HMRC should be via email during the coronavirus (COVID-19) pandemic.

Coronavirus (COVID-19) update: to make sure medical equipment reaches the NHS frontline quicker, Border Force will be prioritising checks on their shipments.

Parents of new-borns will still be able to claim Child Benefit despite the outbreak of coronavirus (COVID-19).