Six defendants including a senior manager and two drivers of a road haulage business have been found guilty on Friday 18 November 2022 of running a large-scale money laundering operation involving in excess of £100 million in cash.

Marcus Justin Hughes (DOB: 08/09/1970) the effective operator of Genesis 2014 (Ltd) UK, a road haulage business, was convicted recently (20 November 2022) at Stoke Crown Court of two counts of conspiracy to launder cash together with Leon Woolley (DOB 3/12/1978) a transport planner at the firm.

Liam Bailey (DOB: 29/11/1999), a further transport planner at the firm and Simon Davies (DOB: 09/11/1970) a business associate of Hughes, were each convicted of one count of conspiracy to launder money.

The Regional Organised Crime Unit for the West Midlands became aware of a criminal operation to launder cash through a haulage company, Genesis 2014 (UK) Ltd. Mr Hughes used an encrypted network phone, known as Encrochat, to communicate with a man in Dubai, Craig Johnson, a convicted fraudster from Stoke on Trent.

They agreed that large sums of cash would be collected at various places in the UK and elsewhere, on a regular basis, with the intention of transporting the cash to London where it could be transferred onwards and legitimised. The scale of cash involved, the lack of any explanation for its provenance and the surrounding circumstances, provided an irresistible inference that the cash was the proceeds of criminality.  The total amount of cash at issue was between £100 million and £150 million depending on the size of the loads for each journey. 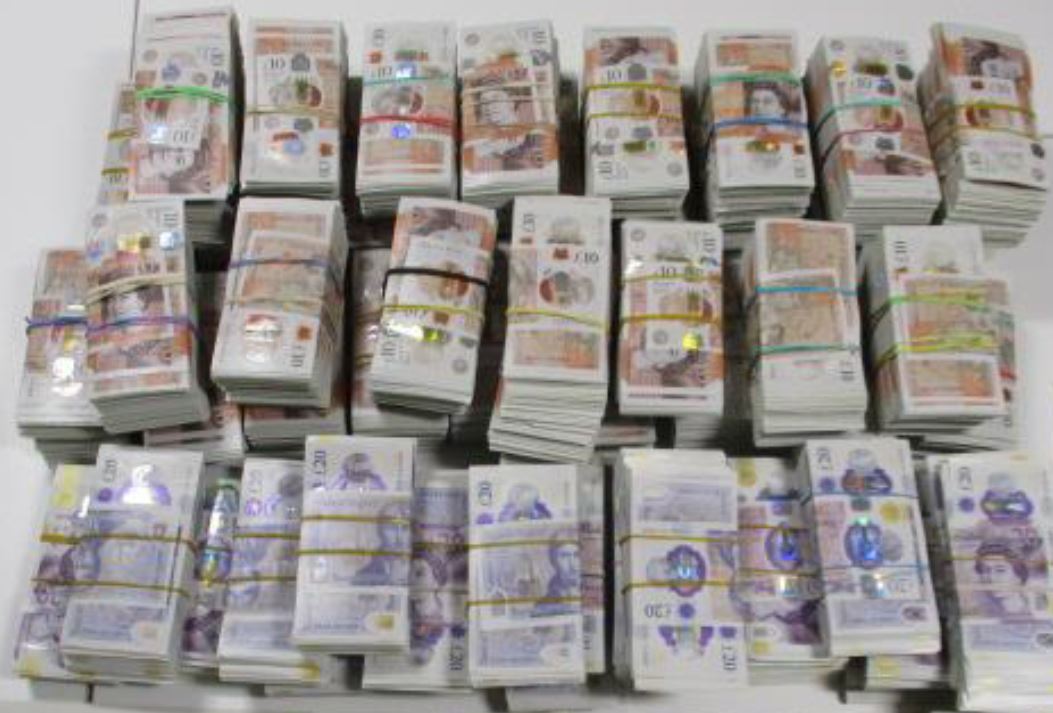 Some of the cash that was being laundered in different shipments

The French authorities had broken into the Encrochat network and reported activity to the British authorities. On 26 March 2021, two Genesis vans driven by Fern and Morgan were stopped separately, each containing substantial bags of cash. The combined total involved around £700k. Hughes was arrested the same day and a further £60k in cash recovered from his home. Extensive phone content indicated the scale and duration of the operation and established that Hughes had held the Encrochat phone in 2020. In total, it is estimated the laundering operation involved in excess of £100 million in cash.

Hughes, who had previously been convicted of drug trafficking and VAT fraud, also should not have been running a haulage business because his operator’s license had been revoked for 5 years in 2018.

Leon Woolley and Liam Bailey worked in the office at Genesis Ltd and Simon Davies was a business associate of Hughes, also involved in directing other defendants to transfer the cash proceeds of criminality.

Jonathan Kelleher of the CPS said:

“The defendants were involved in the wholesale haulage of huge quantities of criminal cash, totalling in excess of £100 million. They were an essential distribution part of the criminal network, transferring the cash proceeds of criminal activity for the wider benefit of organised criminals, as well as their own gain.

"The use of an encrypted Encrochat phone and the communication with criminals in Dubai illustrate the sophisticated methods increasingly used by organised networks, operating across the world.

“The combined efforts of the Regional Organised Crime Unit for the West Midlands, CPS Serious Economic Organised Crime and International Directorate and instructed counsel, have successfully disrupted this distribution element of the criminal network.

“The CPS Proceeds of Crime Division will now pursue the defendants to strip them of their own gains from their involvement in organised crime.”

“These men were part of a nationally significant Organised Crime Group offering professional money laundering services to criminals up and down the country, and beyond. Their convictions and sentences will be a warning to deter others from involvement in money laundering which is as abhorrent as the crimes that generate the cash in the first place. Close cooperation and tireless effort from the outset between the police, CPS Serious Economic Organised Crime and International Directorate and instructed counsel was the key to success in this case.

‘’£701,685.75 has already been forfeited in civil proceedings from this OCG with half of this returning to Staffordshire Police via the Home Office Asset Recovery Incentivisation Scheme to contribute to fighting crime in the county.’’

The CPS is committed to continue to work alongside law enforcement to bring prosecutions where money launderers are seen to conspire with other criminals to wash clean their ill-gotten gains. The CPS is also committed to working more widely with banks, businesses, charities and beyond, to help educate others so that they can avoid becoming victims to attacks from money launderers.

Andrew Burfield, 51, from Burnley, has been given a life sentence for murdering 33-year-old Katie Kenyon in April this year.

Rosemary Ainslie, Head of the CPS Special Crime Division, said: “The CPS has authorised additional criminal charges against Kevin Spacey, 63, for a number of sexual assaults against one man between 2001 and 2004.

A well-known criminal gang leader has avoided another seven years being added onto his seven-year prison sentence after paying back £1,243,270.75, of his ill-gotten gains from a money laundering operation.

Halton Mark Anthony Powell, 44, has been sentenced to two years and four-and-a-half months after pleading guilty to supplying articles for use in a fraud at Southwark Crown Court on 11 November 2022.

Online predator jailed for sexually abusing girls as young as 12

An online predator who forced young girls to sign a sexual contract with him has been jailed.

A couple who subjected a 15-year-old boy to a sustained campaign of physical and mental abuse have been sentenced to life imprisonment for his murder, at Leeds Crown Court recently (03 November 2022).

A high-value serial romance fraudster was yesterday (3 November 2022) found guilty of duping victims out of just over £324,000 in an investment scam.

A serving police officer and an ex-police constable have been sentenced after being convicted of sending grossly offensive messages on a WhatsApp group.

A computer hacker who stole unreleased music from famous musicians and sold them on the dark web in exchange for cryptocurrency was recently imprisoned.