Sepsis is just as urgent as heart attack, says NICE

NICE wants people who show signs of sepsis to be treated with the same urgency given to those with suspected heart attacks. 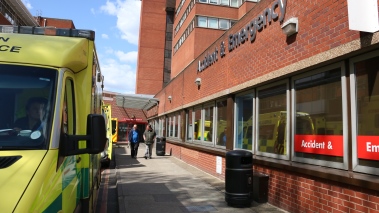 In the new guideline, NICE (National Institute for Health and Care Excellence) says all health professionals, no matter where they work in the NHS, need to think about the possibility of sepsis in all patients who may have an infection.

Sepsis can affect anyone at any time. It starts when the immune system overreacts to an infection and begins to damage the body itself, leading to organ failure and in some cases death.

The UK Sepsis Trust estimates that there are around 150,000 cases of sepsis in the UK every year and it kills around 44,000 people per year.

Professor Saul Faust from the University of Southampton and who chaired the group that developed the guideline, said: “Anyone can succumb to sepsis. It can come on as the result of a minor injury or infection that the body is trying to recover from and the immune system goes into overdrive. Sepsis can be difficult to diagnose with certainty.”

Symptoms of sepsis can vary from person to person. People can get anything from a high temperature, to fast heartbeat to a fever or chills. It can often be mistaken for common infections like flu.

Professor Faust stressed that the only way clinicians could ensure that a diagnosis wasn’t missed was to start asking “could this be sepsis?” earlier on so they rule it out or get people on treatment as soon as possible.

Quick identification and early treatment are key to avoid death from sepsis and to make sure people fully recover. Yet a report published just last year revealed that in over a third (36%) of cases there were delays in identifying sepsis. The report by the National Confidential Enquiry into Patient Outcome and Death found that that many hospitals had no formal protocols in place to recognise sepsis.

Professor Mark Baker, director of the NICE Centre for Guidelines highlights that, “When hospitals are well prepared, clinicians do better at responding to patients with sepsis.”

He said: “If there is any delay in spotting the signs we will fail patients by leaving them with debilitating problems or in the worst cases people will die.”

The NICE guideline presents the signs and symptoms that clinicians should check for and describes what tests to use to diagnose and monitor how a person is doing. It breaks symptoms down to how severe they are and where the person should be treated.

If someone is identified as being high-risk, NICE says they should be rushed to hospital in an ambulance. Once in hospital they should be seen by a senior doctor or nurse straightaway who can start treatment.

The guideline advocates responsible use of antibiotics. Antibiotics should only be given to the sickest people if they meet the high-risk criteria set out in the guideline.

Not everyone with infections will have sepsis or will be at risk of getting seriously ill. These people should be given information on how to monitor their symptoms and how to seek further help if they are worried.

Professor Frank Joseph, consultant physician and spokesperson for the Royal College of Physicians described the guideline as timely and said: “It is vital for patient care that doctors are able to initiate crucial early treatment for sepsis in order to save lives and improve patient outcomes.”

To ensure health professionals are well equipped to implement the guideline, The UK Sepsis Trust is now working with NICE to update their range of clinical toolkits in response to the guideline.

Dr Ron Daniels, chief executive of the UK Sepsis Trust welcomed the guideline as a chance to effect change and said: “We must act decisively to save many of the thousands of lives claimed every year.”

It is the first recommendation to be issued by NICE’s diagnostics advisory committee via its Early Value Assessment pilot project.

An agreement with the companies on the price of 2 breast cancer treatments, Piqray and Trodelvy, has paved the way for NICE to be able to make them available immediately to around 3,450 people on the NHS and maintaining NICE’s 100% approval rate of breast cancer drugs since 2018

Around 4,000 people are set to benefit from a step-change in treatment for early breast cancer following today’s (17 June 2022) provisional approval by NICE of abemaciclib in combination with hormone therapy as an option after surgery

Nick Crabb discusses how we’re developing a collaborative space for research and development, to help us create new methods and processes for health technology assessment.