The Serious Fraud Office (SFO) has secured the conviction of an investment manager who used millions of pounds of investors’ money to fund his luxury lifestyle, which included purchasing a fishing and shooting estate in the Lake District, a ski hotel and a motor boat.

Timothy Schools (61), the investment manager for the Cayman Island-based Axiom Legal Financing Fund, was convicted by a jury at Southwark Crown Court on 5 counts of fraudulent trading, fraud by abuse of position and money laundering.

The Axiom Fund was set up in 2009 by Mr Schools to provide loans to law firms pursuing no-win-no-fee cases. The Axiom Fund secured over £100 million from approximately 500 investors, who were promised a secure return on their investment.

Whilst investors were told their loans would be provided to a panel of high quality law firms to fund legal cases with a high likelihood of success, the majority of the funds (amounting to £40 million) were paid to just three law firms – ATM, Ashton Fox and Bracewell’s – all of which Mr Schools either owned or held undisclosed interest in.

The loans provided to these law firms were siphoned off by Mr Schools. He used funds received by ATM Solicitors to pay himself over £1 million in salary, consultancy fees and other personal benefits.

The cases Axiom funded were not independently vetted, often failed at court and case insurance policies failed to pay out when cases did not succeed. Mr Schools covered up these failures by arranging for the repayments of old loans with new Axiom loans. This gave the false impression to directors, administrators and auditors that law firms were successfully repaying their loans and achieving returns on investment.

The SFO investigation found Mr Schools dishonestly acquired over £19.6 million from the Axiom loan monies, including more than £5.7 million from audit and management fees he dishonestly added to the law firm loans. The monies were transferred and hidden in offshore bank accounts held within complex overseas trusts, and used to finance a lifestyle that included the purchase of shares in a luxury ski hotel in France, a motor boat, luxury cars and a £5 million fishing and shooting estate in the Lake District, bought through an offshore company.

Lisa Osofsky, Director, Serious Fraud Office, said: “Mr Schools deliberately abused his position of trust to enrich himself. Through a complex web of lies, he attempted to hide his fraudulent activity, while spending other people’s hard earned money.” 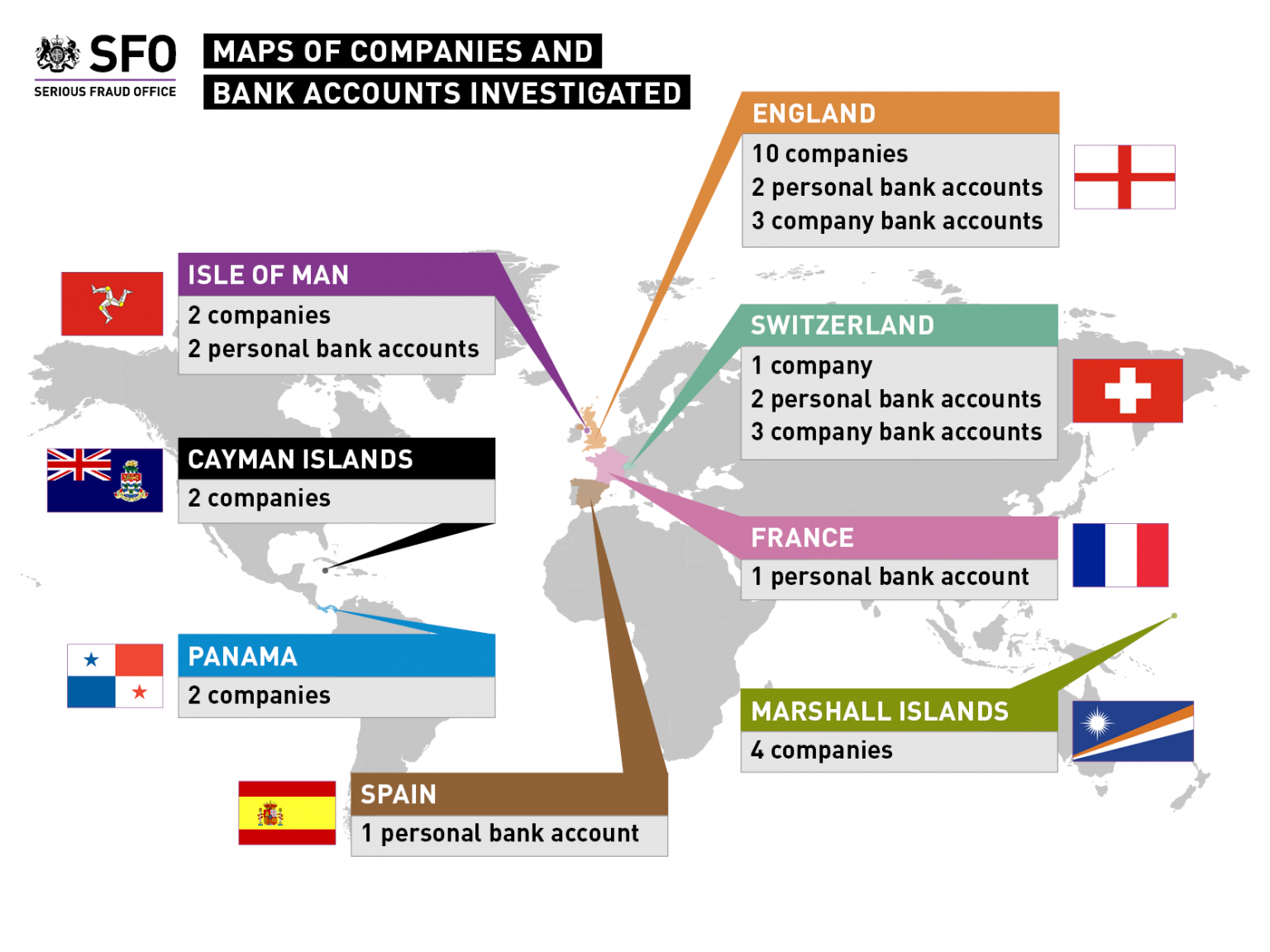 Glencore to pay £280 million for ‘highly corrosive’ and ‘endemic’ corruption

Glencore Energy UK Ltd will pay £280,965,092.95 million (over 400 million USD) after an SFO investigation revealed it paid US $29 million in bribes to gain preferential access to oil in Africa.

The man behind a £226 million fraud affecting thousands of British victims was recently (30 September 2022) jailed at Southwark Crown Court for 12 years following an investigation by the Serious Fraud Office (SFO).

The Serious Fraud Office (SFO) has successfully convicted the individual behind a £226 million fraud involving celebrity-endorsed luxury resorts in the Caribbean.

Convicted fraudster found to be in contempt of court

At the High Court recently (29 July 2022), Dr Gerald Martin Smith was held in contempt of court for breaching a restraint order that prevented him from spending or accessing his assets, except in limited circumstances.

Comprehensive versions of the expected Brian Altman QC review into the collapse of the R v Woods and Marshall trial and Sir David Calvert-Smith’s review into the SFO’s handling of the Unaoil investigation, were yesterday published.

Glencore Energy (UK) Ltd were yesterday convicted on all charges of bribery brought against it by the Serious Fraud Office (SFO).

The Serious Fraud Office (SFO) can confirm the imprisonment of a convicted fraudster who conned investors out of £72.5 million with false claims of supplying services to the London Olympic Village.