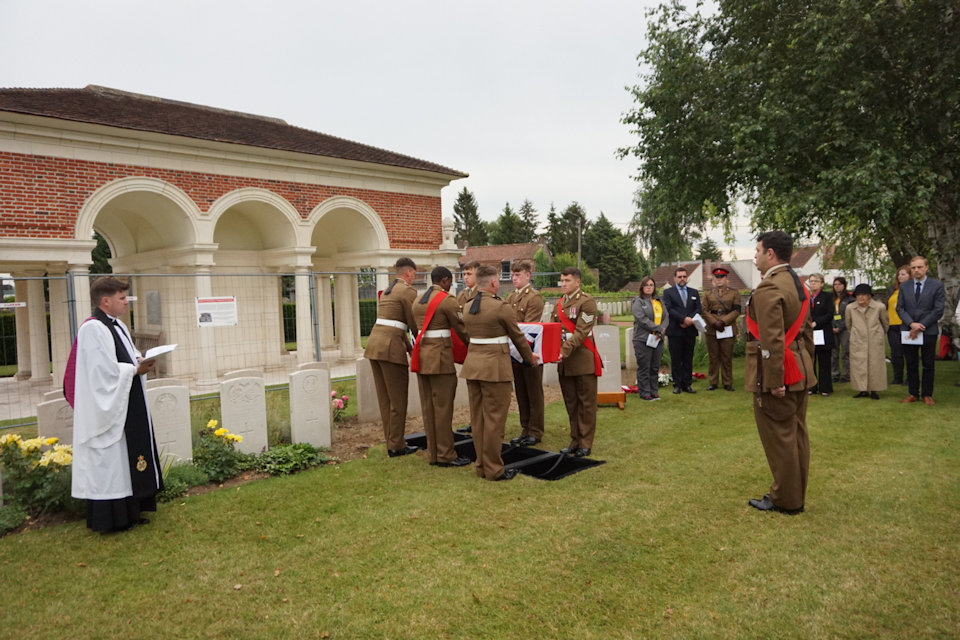 The services, which were organised by the MOD’s Joint Casualty and Compassionate Centre (JCCC), part of Defence Business Services, were conducted by the Chaplain to 1st Battalion The Royal Welsh.

It has been a privilege to work with The Royal Welsh to organise these 2 services. Now more than 100 years after their deaths, it is vital that the sacrifices of such men are not forgotten. To share this experience with the Kington family has been an honour as he is remembered by his family today.

Capt Kington was killed in action having been hit by a shell. He was 38 years old. 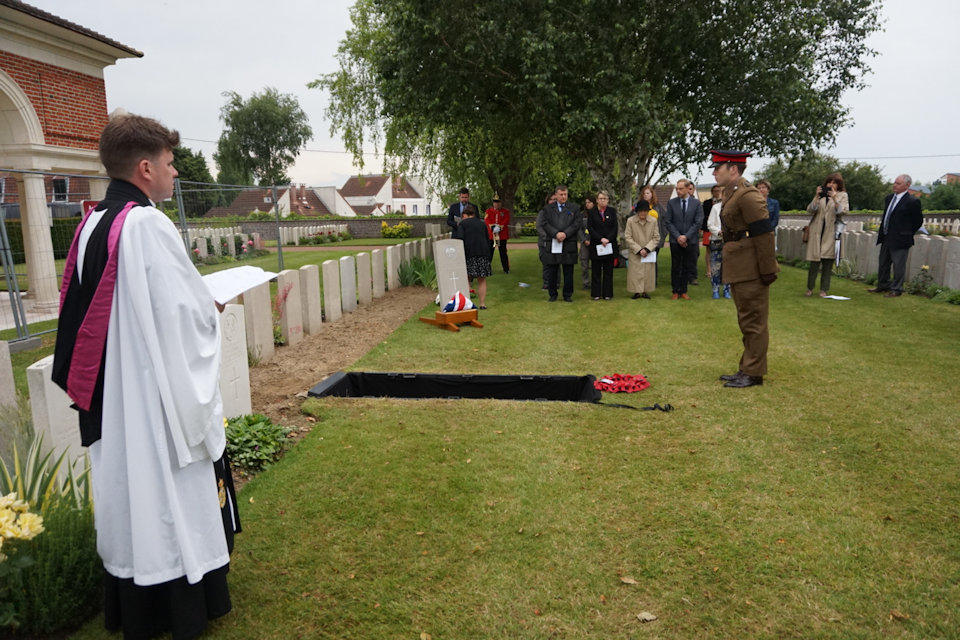 Capt David Hughes, 1st Battalion The Royal Welsh, lays a wreath at the graveside of the unknown South Wales Borderer.

Capt Kington’s body was recovered after the Great War and he was buried in Tyne Cot Cemetery as an unknown Captain of The Royal Welsh Fusiliers. As his grave was unidentified, he was commemorated on the Menin Gate. 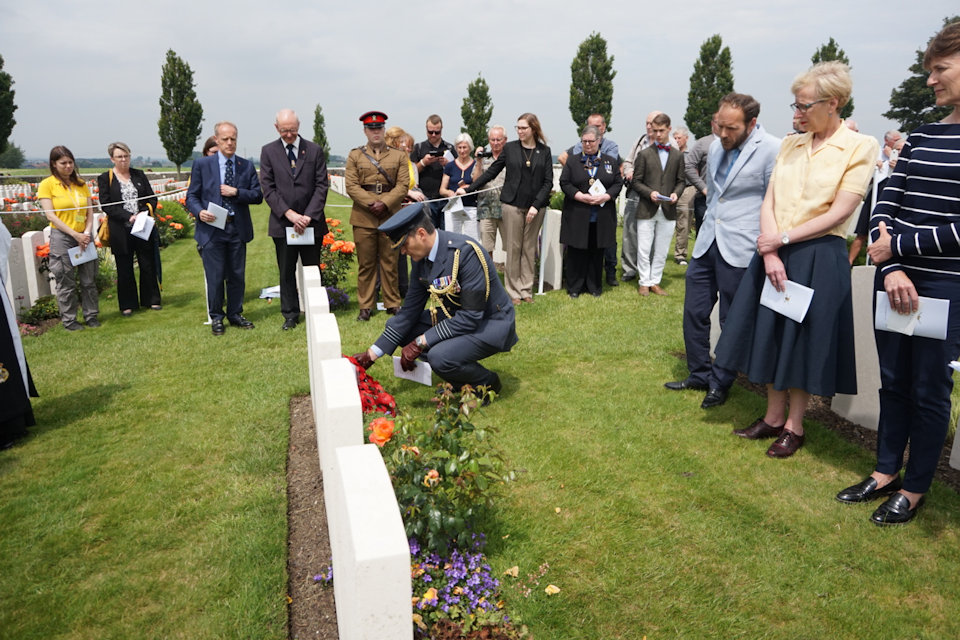 The final resting place of Capt Kington came to light after researchers submitted evidence that suggested he had been found. Further investigation to corroborate this finding was undertaken by the MOD’s JCCC and the National Army Museum enabling the identification of the ‘Unknown Soldier’s’ grave to be confirmed by the JCCC. 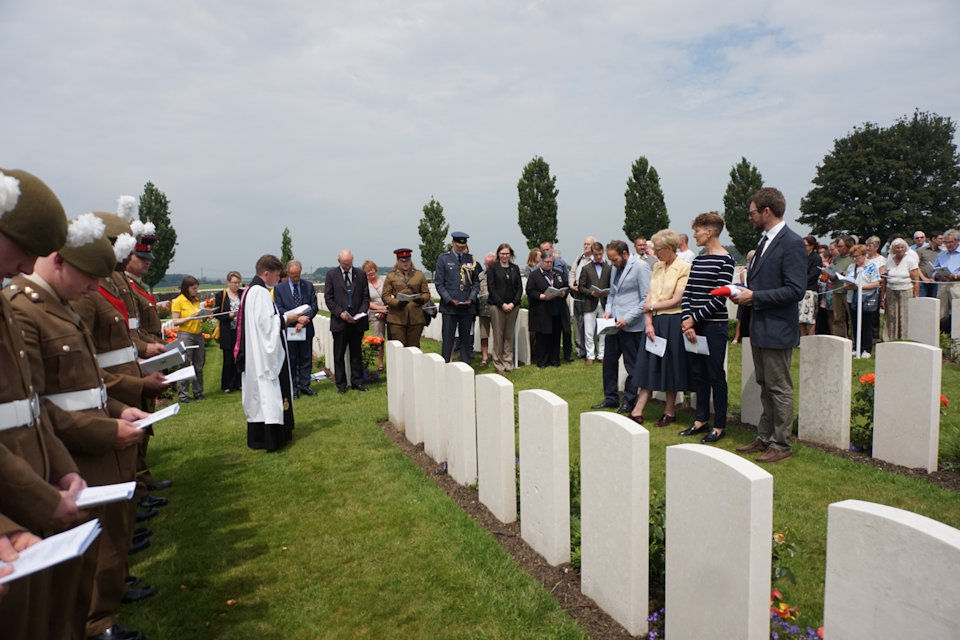 The family of Capt Kington and soldiers of The Royal Welsh participate in the rededication service at Tyne Cot Cemetery.

We are extremely grateful for the hard work put in by all those who helped identify the final resting place of our great grandfather William Kington. It is wonderful to discover the effort that goes in to preserving the memory of those who fought and died for their country.

On the outbreak of the First World War in August 1914, William re-joined 1st Battalion The Royal Welsh Fusiliers, deplaning at Zeebrugge on 7 October. They arrived in the town of Ypres on 14 October 1914. On 20 October they moved into trenches near Broodseinde.

One of his soldiers was later quoted as saying:

He was a very fine officer, and would crack a joke in the trenches which would set us all laughing our sides out. It made us all mad to avenge his death.

The remains of the unknown soldier of The South Wales Borderers were discovered during drainage work on the outskirts of Richebourg, near Neuve Chapelle. He was identified as a South Wales Borderer through artefacts found with the remains. Extensive research showed that this soldier was most likely a member of 1st Battalion The South Wales Borderers who was killed on 9 or 10 May 1915 during the Battle of Aubers Ridge. However, the JCCC are unable to identify him due to there being too many soldiers of that battalion missing from that time.

The unknown soldier was laid to rest by a burial party composed of members of 1st Battalion The Royal Welsh.

The new grave and 2 new headstones were prepared by the CWGC.

The ceremonies held today show how the work of the Commonwealth War Graves Commission continues. The soldier of the South Wales Borderers, recovered by CWGC staff, now lies alongside his comrades. Captain Kington’s grave has been rededicated in the presence of his family with a new headstone bearing an inscription chosen by them. The graves of both men will be cared for by the Commission forevermore.