The man, who is from Irvine in North Ayrshire, was detained as he stepped off a flight from Spain at Glasgow Prestwick Airport recently (9 October).

He was transported to Carlisle police station where he was questioned by investigators, before being released under investigation. 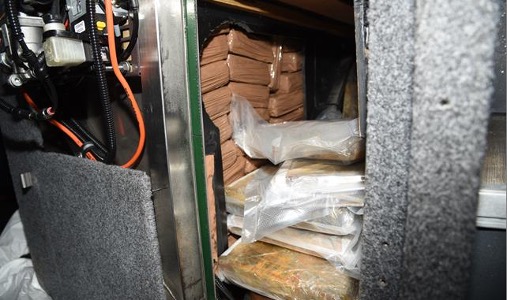 The arrest forms part of an ongoing investigation which has already seen two men from the north west of England jailed for more than 30 years.

Driver Christopher Bullows, from St Helens, and his passenger Mark Tucker, from Blackburn, were arrested after their coach was stopped at Dover Docks in September 2020.

A search by Border Force uncovered the cocaine hidden in a specially constructed wastewater tank. The drugs would have been worth around £19.4 million if sold on the streets of the UK.

In July this year Tucker was jailed for 16 years and Bullows for 14 years and four months at Canterbury Crown Court.

“This was a significant amount of cocaine and our investigation into this smuggling attempt continues.

“Drugs fuel violence and exploitation in our communities, and those involved in smuggling into the UK play a key role in that chain of criminality. We will do all we can to disrupt and dismantle the organised crime groups involved.”