As the UK recognises the UN International Day for the Elimination of Sexual Violence in Conflict, personnel deployed as part of the UN Peacekeeping mission to South Sudan have been delivering empowerment-based self-defence workshops in partnership with the UN Human Rights Division.

These classes aim to coach women living in the Malakal camp on methods to help them identify risks to their personal safety and teach them moves to defend themselves.

In South Sudan, vulnerable groups, such as women, are subjected to various forms of conflict-related sexual violence. Gender-based violence is a major human rights violation in conflict zones, which tends to increase during post-conflict periods and affect communities for many years afterwards.

I am proud our Armed Forces can help protect and empower women and other vulnerable groups across the globe. From self-defence workshops to training other militaries on gender rights our personnel bring their professionalism and expertise to help end this terrible practice. 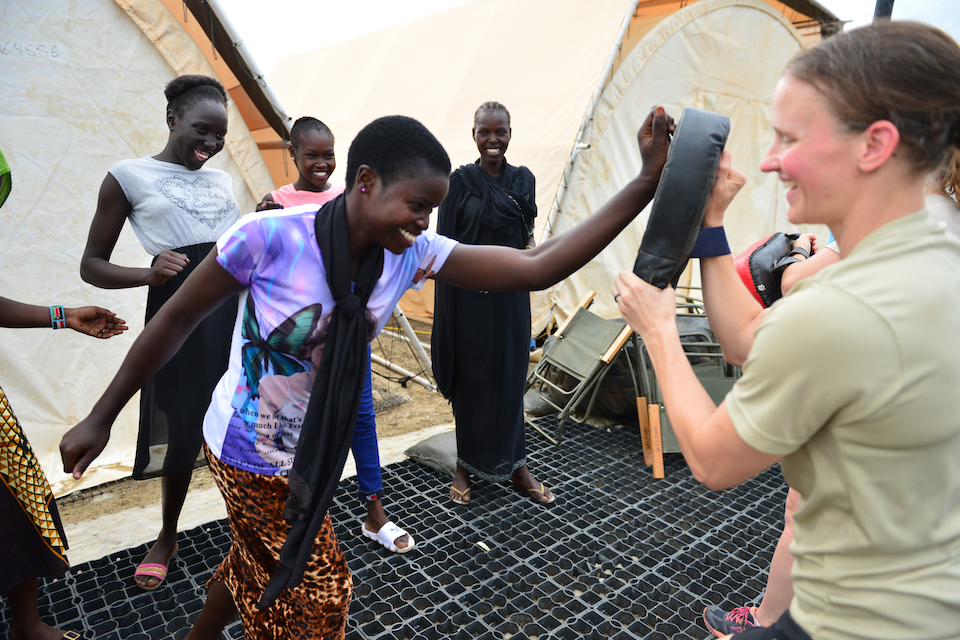 Women who attend the workshops will become focal points for their communities and the programme aims to build their confidence, so the participants are able to report cases of sexual violence to the authorities. Many instances go unreported due to the stigma attached to such crimes and the UN is working to encourage greater reporting and accountability.

This is part of the UN’s survivor-centred approach in South Sudan that aims to join up services to tackle gender-based human rights violations. By increasing the provision of services, including legal redress mechanisms, and holding awareness-raising sessions there has already been an increase in the number of cases reported to the police for their attention.

Preventing sexual violence in conflict is contributing to the UN’s Sustainable Development Goals, which aim to make the world fairer, healthier, safer and more prosperous by 2030. Key to the success of the UN Goals is the prevention of violence, crime and terrorism in conflict and with over 600 personnel deployed on peacekeeping operations the UK military is making a sizeable contribution to this vital UN mission.

We are continually seeking opportunities to assist with the protection of the most vulnerable people in South Sudan to prevent incidents of sexual violence in conflict. This initiative allows us to contribute to empowering the women we live and work alongside.

By coaching women on basic self-defence methods, it gives them the self-confidence to be able to make an assessment of the situation and react effectively to keep them safe

Workshop participant Nyakot John Jok has lived in Malakal camp since 2012 with her mother, commenting on the workshops she yesterday said:

The situation in the camp is very poor because of money. We have food but we do not have money to buy things. I like the British Soldiers; they are protecting us from anything that is coming. I have learnt how to escape from someone who wants to fight me or wants to attack me. It makes me feel safer and I am very happy with that. A £16 million programme to boost small and medium-sized enterprise (SME) defence innovation has been launched today.

Guidance video which provides helpful information you might need if claiming for compensation under either the Armed Forces Compensation Scheme or the War Pension Scheme.