The Welsh Government’s net-zero commitments include increasing the number of electric vehicles in public sector fleets by 2030. But who will fix and maintain all of those new vehicles? In Swansea, Unite worked with the Council to retrain the existing vehicle maintenance workers.

Swansea Council currently has 60 electric vehicles in its fleet. A further 200-300 will be introduced in the next few years. When electric vehicles were first introduced into the fleet, maintenance was subcontracted out. But the pandemic revealed that this was not a resilient strategy. Outsourcing the work also put vehicle maintenance jobs at Swansea Council at risk. So, the Council made the decision to bring the work back in house.

Mark Barrow is the Fleet Manager of the Central Transport Unit at Swansea Council. He realised that workers urgently needed training for electric vehicle maintenance and discussed the matter with Jason Strannigan, Unite Convenor at Swansea City Council Unite branch. 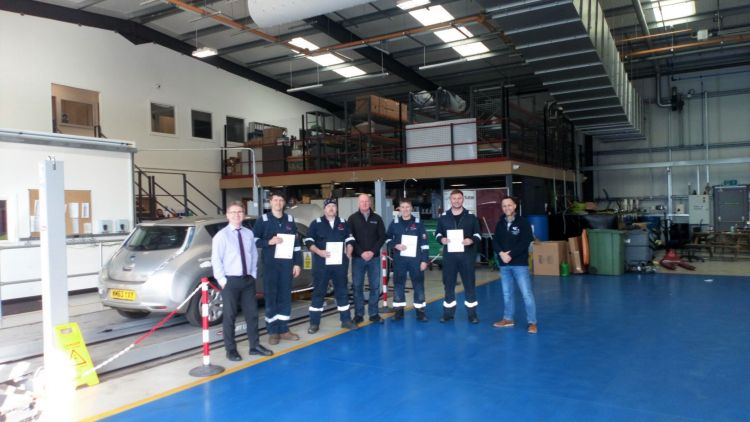 Unite has a long-standing relationship with the Council. A few years ago, Unite helped to provide training for Heavy Goods Vehicle (HGV) drivers at the Council, supported by the Wales Union Learning Fund (WULF). The training was ground-breaking. It opened the door for driver training to be supported by Welsh Government funding. It also strengthened the pathway for continued collaboration between Unite and the Council.

Strannigan was instrumental in signposting the Council to support from Unite. Through guidance from the Unite WULF project, they were able to secure funding from the Personal Learning Accounts (PLA) programme for the training. Unite also linked the Council up with local further education provider Gower College to deliver the training.

To date, all technicians at Swansea Council have been trained to IMI Level 3 in electric and hybrid vehicle maintenance. Workers now have the green skills to reflect the changing profile of the fleet.

The increased in-house vehicle maintenance has also safeguarded their jobs in the shift to a green economy. Jason Strannigan says, “We know that the more services kept in house the better. It protects the jobs of employees at Swansea City Council for the future. This is a really good working relationship between Unite and the Central Transport Unit.”

Swansea Council is now better equipped to deal with future challenges as a result of the transition to net-zero. Fleet Manager Mark Barrow says, “I have greater confidence in transitioning  the fleet to ultra-low emission vehicles and in the subsequent transition to net zero…this is part of the whole strategy…the key word is resilience. This ties into the broader transition strategy for the whole fleet. It guarantees future job security. It has also created a model of good practice that will likely be replicated across other authorities…We’ve got the foundation in; we are ready to go.”

Unite represents workers across many sectors that will be affected by net zero targets. Training in green skills is an important part of the union’s just transition strategy.

The training shows the important partnership between unions and employers in facilitating the transition to a green economy. Richard Jackson, Regional Learning Organiser for Unite WULF explains.

“We are offering a positive approach – upskilling, signposting, and providing training skills…linking all stakeholders together to create support networks. We are able to look at best practice…and develop best practice as is the case here.”

Union leaders have today (Thursday) called on the Prime Minister and Chancellor to provide a “cast-iron assurance” they will not make further spending cuts to public services.

Liz Truss must reverse her budget to stabilise the economy - TUC

TUC head of economics Kate Bell yesterday commented on the Bank of England’s emergency intervention to protect credit flow in the aftermath of the mini-budget.

CBI responds to Leader of the Opposition's speech

CBI yesterday responded to Leader of the Opposition's speech.

Citizens Advice has responded to Ofgem’s review of supplier practice in helping people struggling with bills.

CIPD/Omni RMS urges employers to look at what else they can do to attract and retain top talent beyond pay, including offering greater flexible working

UK families to lose out on more than £2,000 from not owning our own energy

UK families could benefit by at least £2,250 – and up to £4,400 – over the next two years if Britain had the same public ownership of energy as other countries, according to TUC research published recently (Saturday).

Two UK-based companies are designing missions to clear hazardous space junk alongside the launch of a new programme to back cutting-edge space technology.

Retail sales volumes fell at a considerable pace in the year to September, following a temporary return to growth in August, according to the latest CBI Distributive Trades Survey.