Wages for UK workers have continued to grow, as new figures released yesterday show wages have been rising faster than inflation for a year and a half, growing by 1.9% in real terms on last year.

The number of people in work is up 369,000 on last year. This means more workers across the UK are benefiting from greater financial security and increased spending power than a year ago.

The government continues to support families with the cost of living, ensuring they can keep more of what they earn. This includes raising the personal tax allowance and increasing the National Living Wage – which has boosted earnings for 2.4 million workers since 1 April.

Job opportunities for UK workers also continue to grow as we have seen 292,000 more people employed in the private sector in the last year.

The UK labour market has seen over 1.8 million more women in employment since 2010, a testament to the government’s dedication to tackling potential barriers to work for women in search of a new career – including those who need to work flexibly to fit around family life. 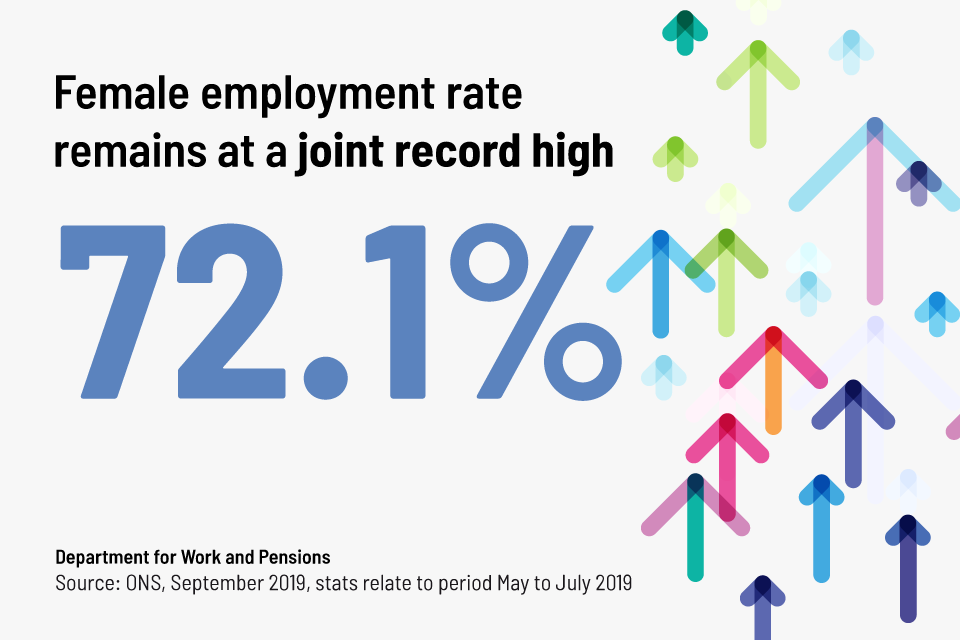 “Wages are consistently rising faster than inflation – now for over a year and a half – meaning we’re seeing a sustained boost in pay, supporting consumer confidence and giving a vital lift to millions of households who gain from greater financial security.

“This joint record employment rate and decades-low unemployment shows our labour market is booming. It’s especially pleasing to see continued record female employment at 72.1%, signalling the great strides we’ve made in empowering women in the workplace, whatever their background.

“There is still more to do. But today’s positive figures again show a thriving, diverse and resilient labour market to be proud of, and we are in great shape for Brexit on 31 October.”

The figures from the Office for National Statistics also show that the number of people in employment has risen on the year with the South East and the East Midlands seeing the biggest rise in employment at 148,000 and 74,000 respectively; evidence that workers up and down the country are able to pursue employment, regardless of background.

Since 2010, we have seen 2.8 million more people employed in higher skilled roles, which generally command a higher wage. The UK labour market remains in a strong position as the UK prepares to leave the EU.

Jobcentres across the UK are to benefit from a boost of up to £3 million to support homeless people, Minister for Welfare Delivery Will Quince said today.

There is a new record high employment rate and the unemployment rate has not been lower since 1974. Wage growth outpaces inflation for 21st successive month.

There is a new record high employment rate and the unemployment rate has not been lower since 1974. Wage growth outpaces inflation for 21st successive month.

Benefit claimants to get more cash to help with funeral costs

The maximum amount available through Funeral Expenses Payments will increase to £1,000 from Spring 2020.

On the third anniversary of the scheme, changes have been announced to help businesses achieve their goal of workplace inclusivity.

Funding will be available to partner organisations, including charities, from April 2020 to help vulnerable people claim Universal Credit.

Over 200 businesses started each week through DWP scheme

New Enterprise Allowance, a fund for jobseekers with a business idea, has helped launch over 200 businesses a week by benefit claimants since 2017.