Csilla Zsigri is VP of Marketing & Strategy at Blockchain Technology Partners (BTP), and a former technology industry analyst covering the distributed ledger technology space, among other areas. In this insight, she discusses the creation of the DLT Landscape.

The idea to create the DLT Landscape was first conceived in conversations I had at the Hyperledger Global Forum in early 2020 in Phoenix - the last in-person work event I attended before the coronavirus pandemic hit the world. (‘Fun’ fact is that the social event of the conference was held at a place called Corona Ranch.)

The creation of the DLT Landscape was inspired by the growing complexity of the distributed ledger technology (DLT) space, in particular, the increasing number of projects and companies innovating in areas outside of the core ledger layer, which has considerably transformed the DLT vendor landscape in the last couple of years.

In my prior life as a technology industry analyst - covering DLT among other things - I often found that people were using the same terms for very different things, comparing apples and oranges, ultimately creating a lot of confusion over the technology and its components, as well as where specific projects, company offerings, and networks fit into the overall ecosystem.

Creating a business stack with a technology foundation to reflect and at the same time decipher the complexity of the DLT vendor landscape, seemed like a useful tool to not only help mitigate the confusion by providing a better understanding of the market, but also to create a strategic tool that would allow organisations to better position their offerings and find the right partners to go to market. 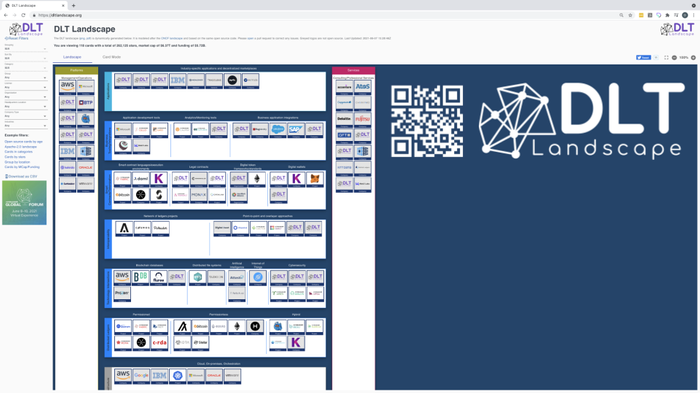 Structurally, the DLT Landscape starts with the basic compute infrastructure layer and goes on to distributed ledgers or core protocols, where we differentiate between permissioned, permissionless, and hybrid ledgers. Since the launch of the Bitcoin blockchain over a decade ago, a number of distributed ledger protocols have emerged catering to enterprise-focused use cases and a variety of application areas. Organisations continue to use a variety of distributed ledgers, and make decisions depending on use-case requirements, existing technical skills and vendor relationships.

Also, by currently living in a multi-ledger world, and not forgetting about business applications and legacy systems that organizations use, as well as with usability being a key requirement for adoption, interoperability in the DLT space is critical to allow people and organizations (as well as machines!) to transact smoothly and seamlessly.

Smart contracts and digital tokens also play a critical role in the DLT landscape. Smart contracts, on the one hand, have become known to the world as transaction protocols running on a distributed ledger, embodying the self-enforcing business logic of a multiparty application. Smart contracts formalise and automate the relationship between individuals, organisations and machines that participate in a network. Digital tokens, on the other hand, can improve the accessibility, efficiency, liquidity and transparency of existing asset markets, whether that’s money, commodity, diamond or a piece of art.

There is a dedicated layer to business tools and integration into existing applications in the landscape, which mirrors the availability of a wide range of industry-specific implementations, ranging from business networks that enable the traceability of specific assets, as well as decentralised marketplaces for trading data, and other assets like in-game collectibles.

On the two sides of the landscape, you will find platforms and services. Overcoming shortages in IT skills and resources is a key challenge associated with DLT, and these vendors seek to address that, and free organisations from pains involved with building and running blockchain networks and applications.

Launched in April 2021, the DLT Landscape is a living segmentation of the evolving DLT market, modelled after the CNCF Landscape, and is based on the same open-source code. It is curated and hosted by BTP, but it is independent of the company. The whole DLT community is invited to help shape it, which is the reason why it was launched as an open-source initiative.

This insight is part of techUK's new Blockchain Reimagined campaign. You can read more about this here

techUK, in collaboration with its Smart City Working Group, has published a new report which outlines how cities and technology businesses are rethinking the approach to planning and delivering smart cities to overcome complexity and drive step changes in public service and infrastructure provision.

techUK’s Social Care Innovation Hub will showcase the innovative work of our members and serve as a valuable resource for organisations across industry and beyond.

Guest blog: Getting digital competition right will drive growth and innovation across the UK

Guest Report: Impact of the Russia-Ukraine crisis on the Technology sector

Dun & Bradstreet map the business impact for tech companies who have had operations in Russia and Ukraine.

How can techUK members and industry be part of the Digital Inclusion Service?

Is the UK ready for the future of compute?

We are at an exciting juncture for technology and innovation in the UK.  The Government’s future of compute review, launched during London Tech Week, foresees a world where nearly every aspect of business and research is transformed by the rapid growth in computing capabilities.

The Ministry of Defence has published its new Defence Artificial Intelligence (AI) Strategy, which sets out how it will adopt and exploit AI technologies, and become the world’s most effective, efficient, trusted and influential Defence organisation for its size in AI

The power of collaboration: Technology’s role in tackling the challenges of VAWG and RASSO

At last month’s Police Digital Summit in the UK, a panel of police, tech specialists and criminal justice stakeholders discussed how technology could help to meet the challenges of rape and serious sexual offences, and violence against women and girls; techUK’s Georgie Henley, who chaired the panel, highlights some of the key points from the discussion, and the collaborative approaches that can ensure improved responses in the future.