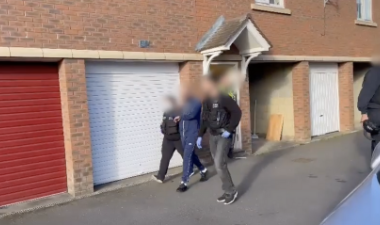 The man, aged in his 30s, was yesterday detained on suspicion of drugs and money laundering offences by National Crime Agency officers at an address on Brean Road in Swindon, in an operation supported by Wiltshire Police. A woman in her 20s was also arrested.

NCA officers recovered items including machinery and mixing agents consistent with pill making during the raids.

A man and a woman, both in their 50s, were also arrested in a co-ordinated strike at an address in West End Road, Swindon.

All four are now being questioned.

NCA officers are investigating a Wiltshire based company alleged to have been supplying pill presses, stamps and mixing agents to organised crime groups involved in making and distributing so-called ‘street valium’ pills in Scotland.

The pills, also known as ‘street benzos’, are sold cheaply – sometimes for less than the price of a chocolate bar. They are known to be behind a growing percentage of drug related deaths across Britain and particularly in Scotland.

The arrests yesterday follow a series of raids by Police Scotland in Dalry, Paisley and Glasgow in early 2020, which led to seizures of pills, presses and pill-making equipment. Five men were subsequently jailed for 19 years.

“This investigation has brought the seizure of items which we believe were used as part of the production of illegal ‘street Valium' tablets. We urge people to avoid taking these drugs – they can be lethal.

“They destroy lives and have a catastrophic impact on our communities. The NCA and our partners are determined to continue our work to take both the substances and equipment used to produce them off the streets, and target the organised crime groups involved in their distribution.”