The CMA has set out measures to ensure a national network of electric vehicle chargepoints is in place ahead of the 2030 ban on the sale of new petrol and diesel cars.

The CMA has set out measures to ensure a national network of electric vehicle chargepoints is in place ahead of the 2030 ban on the sale of new petrol and diesel cars.

As part of its market study into electric vehicle (EV) charging, the Competition and Markets Authority (CMA) examined whether the industry can deliver a comprehensive UK charging network that works competitively and that people can trust.

While some parts of this new sector are developing relatively well – including charging at locations like shopping centres, workplaces and people’s private parking (garages and driveways) – the CMA has found that other parts are facing problems which will hinder roll-out. This could impact the Government’s plans to ban the sale of new petrol and diesel cars by 2030 and its wider commitment to make the UK net zero by 2050.

In particular, the CMA is concerned about the choice and availability of chargepoints at motorway service stations, where competition is limited; the roll-out of on-street charging by Local Authorities (which many drivers will rely on) is too slow; and rural areas risk being left behind with too few chargepoints due to lack of investment.

In addition, research shows that charging can sometimes be difficult and frustrating for drivers, which could stop people switching to EVs. Concerns about the reliability of chargepoints, difficulties in comparing prices and paying for charging, risk reducing people’s confidence and trust. The CMA has set out four principles to ensure that using and paying for charging is as simple as filing up with petrol and diesel.

Charging should be as simple as filling up with petrol or diesel:

The UK has around 25,000 chargepoints currently and, while there is still uncertainty, forecasts suggest more than ten times this amount will be needed by 2030.

“Electric vehicles play a critical role in meeting Net Zero but the challenges with creating an entirely new charging network should not be underestimated. Some areas of the roll-out are going well and the UK’s network is growing – but it’s clear that other parts, like charging at motorway service stations and on-street, have much bigger hurdles to overcome.

“There needs to be action now to address the postcode lottery in electric vehicle charging as we approach the ban on sales of new petrol and diesel cars by 2030.

“Our recommendations will promote strong competition, encourage more investment, and build people’s trust, both now and in the future. The CMA has also opened a competition law investigation into EV charging along motorways and will continue to work with government and the industry to help ensure electric vehicle charging is a success.”

The CMA’s key recommendations are that:

The CMA has also launched a competition law investigation into long-term exclusive arrangements between the Electric Highway – a ChargePoint provider – and three motorway service operators – MOTO, Roadchef and Extra. Currently, the Electric Highway provides 80% of all chargepoints at motorway service stations (excluding Tesla chargepoints which can only be used by Tesla vehicles) and its long-term exclusive arrangements, which last between 10-15 years, cover around two-thirds of motorway service stations.

The CMA is concerned that these arrangements make it difficult for other operators to provide competing chargepoints at motorway service stations. This could result in drivers losing out on the benefits of competition such as greater provision, more choice, competitive prices and reliable, high-quality chargepoints.

Net Zero Week runs from the 17 – 23 July 2021. All updates on the CMA’s work in this area can be found on the Electric vehicle charging market study case page.

Public chargepoints per 100,000 of population by UK country and region 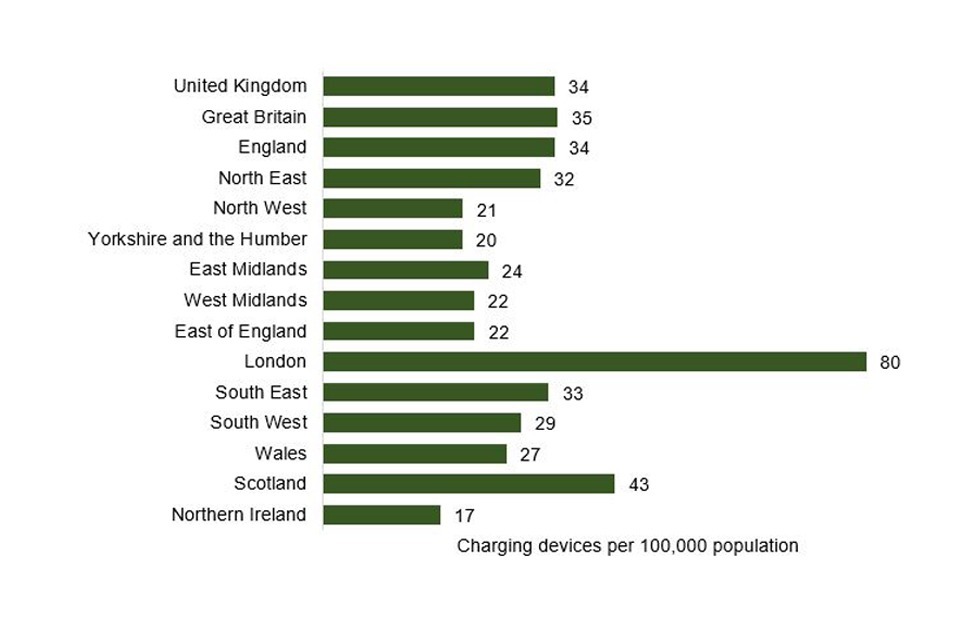 For number of chargepoints per 100,000 of the population, broken down by local authority, please refer to ‘Electric vehicle charging device statistics: April 2021 tables’.

CMA commits to implementing the recommendations in full

Google probed over potential abuse of dominance in ad tech

The CMA is investigating whether Google has broken the law by restricting competition in the digital advertising technology market.

Hundreds of customers that buy domestic gas from BDS Fuels will be freed from unlawful exclusivity contracts.

The CMA has provisionally found that the merger of Veolia and Suez would lead to a loss of competition in the supply of several waste and water management services in the UK.

The CMA has provisionally found that the merger of 2 firms offering property search services could lead to a worse deal for homebuyers.

The CMA’s most senior enforcer has warned that anyone looking to exploit the cost-of-living crisis by forming cartels risk robust enforcement action, including possible dawn raids.

Michael Grenfell: The CMA in turbulent times - where we are and where we're going

A speech delivered by Michael Grenfell, Executive Director of Enforcement at the CMA, at the Pinsent Masons annual competition conference.

CMA publishes code of conduct advice for platforms and publishers

Big tech companies should agree fairer deals with online publishers in order to use their content, according to the UK’s competition watchdog.

LSEG’s anticipated purchase of Quantile could now be referred for an in-depth investigation after finding that the deal raises competition concerns.