On the College agenda: Strengthening the resilience of EU banks

On 27 October, the Commission adopted a set of new rules that aim at ensuring the resilience of banks in the EU to potential economic shocks, while enabling them to contribute to the green transition of EU economy and protecting financial stability. 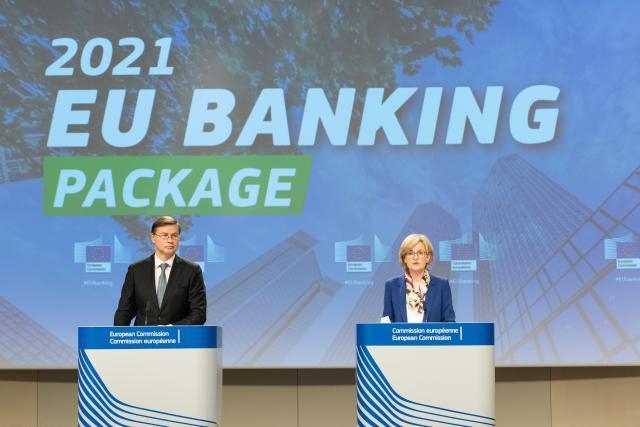 “We depend on a strong and stable banking sector to fund jobs and sustainable growth. It should adequately finance a social market economy that works for Europe's people and businesses,” Commission's Executive Vice-President Valdis Dombrovskis told the press conference following the meeting of the College of Commissioners. He underlined that today's proposal aimed to keep banks ‘strong, modern, viable and competitive'.

The recent (27 October 2021) package also includes proposals on how banks need to take into account Environmental, Social and Governance (ESG) risks when managing their business.

“We are introducing specific requirements for banks to implement the systematic management of ESG risks,” said Mairead McGuinness, Commissioner for financial services, financial stability and Capital Markets Union. She also explained the improvements proposed in the supervision of banks. Supervisors will have stronger tools to oversee EU banks, including complex banking groups. Minimum standards will be introduced to supervise third-country branches of banks in the EU.

Commissioner McGuinness also recognised the opportunities and changes that the future digital and green transition will bring into the financial system. “Finishing the job on the reforms prompted by the global financial crisis will help us concentrate on preparing for the future,” she concluded.

European Semester Spring Package: Sustaining a green and sustainable recovery in the face of increased uncertainty

The European Commission's 2022 European Semester Spring Package provides Member States with support and guidance two years on from the first impact of the COVID-19 pandemic and in the midst of Russia's ongoing invasion of Ukraine.

The European Commission has approved a €16 million Finnish scheme to support the agricultural sector in the context of Russia's invasion of Ukraine.

The European Commission and the High Representative recently (20 May 2022) reported on political and economic developments in the Hong Kong Special Administrative Region.

The European Commission proposed an exceptional measure funded by the European Agricultural Fund for Rural Development (EAFRD) to allow Member States to pay a one-off lump sum to farmers and agri-food businesses affected by significant increases in input costs.

The European Commission and the High Representative recently (20 May 2022) reported on political and economic developments in the Macao Special Administrative Region, covering 2021.

The European Commission, on behalf of the EU, recently (20 May 2022) disbursed €600 million in Macro-Financial Assistance (MFA) to Ukraine. Following Russia's unprovoked and unjustified invasion, this urgent financial support helps Ukraine address its acute financing gap related to its exceptional humanitarian and defence needs.

The European Commission has approved a €500 million Luxembourgish guarantee scheme to support companies across sectors in the context of Russia's invasion of Ukraine.