Electric vehicles may become even greener, the government yesterday (22 October 2019) announced with the launch of a consultation on introducing green number plates for zero emission cars.

As the UK moves at pace towards net zero emissions, the initiative aims to raise awareness of the increasing number of zero tailpipe emission vehicles on UK roads, help their drivers to benefit more easily from local incentives like free or cheaper parking and encourage greater uptake of new vehicle technology.

The announcement marks another milestone for the government’s Road to Zero Strategy, a £1.5 billion package of support which aims to make the UK the best place in the world to own an electric vehicle. Since the strategy’s publication, the UK has seen record numbers of zero emission vehicles registered and the government has marked its intention to be the first G7 country to legislate for net zero emissions by 2050.

Through the introduction of green number plates, local authorities would have a useful visual identifier should they wish to introduce incentives to promote the use of zero emission vehicles, such as allowing these drivers to use bus lanes and to pay less for parking. A similar scheme was trialled in Ontario with drivers of electric vehicles given free access to toll lanes and high occupancy vehicle lanes. Ontario saw an increase in electric vehicle registrations. 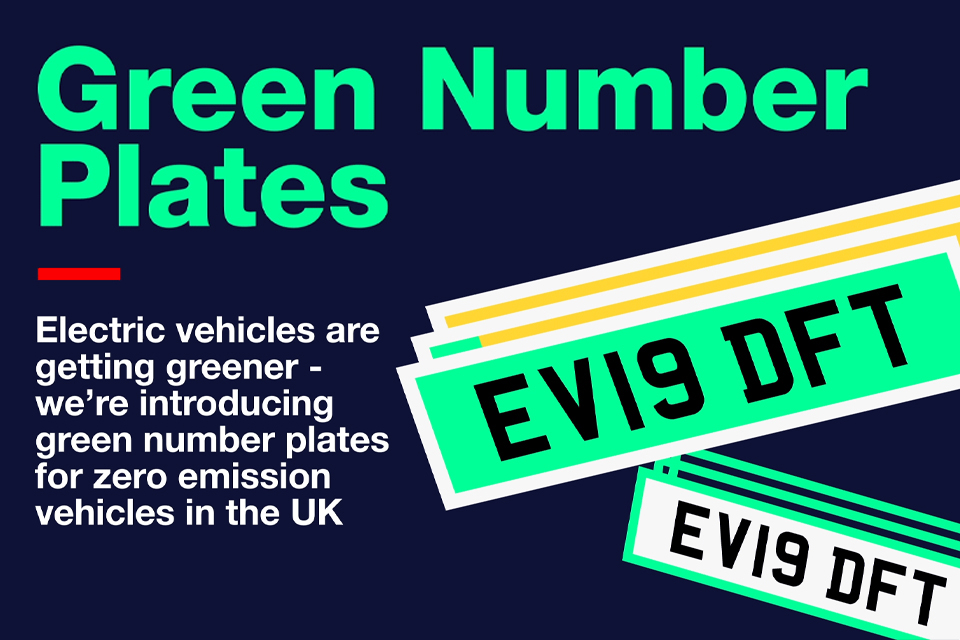 The UK is in the driving seat of global efforts to tackle vehicle emissions and climate change and improve air quality, but we want to accelerate our progress.

Green number plates are a really positive and exciting way to help everyone recognise the increasing number of electric vehicles on our roads.

By increasing awareness of these vehicles and the benefits they bring to their drivers and our environment, we will turbo-charge the zero emission revolution.

Green number plates make these vehicles, and our decision to drive in a more environmentally-friendly way, more visible on roads. We think making the changing social norm noticeable will help encourage more of us to swap our cars for cleaner options.

The consultation seeks views from industry and the public on a number of aspects surrounding the scheme, including vehicle eligibility, number plate design and the rollout of the plates.

It follows the Transport Secretary’s recent announcement that he has doubled funding for chargepoints on residential streets, to help make charging an electric car easier for those without access to off-street parking. The government is also currently reviewing responses to the consultation on requiring chargepoints to be built into all new homes with a parking space.

People arriving in the UK from these destinations from 4am Saturday 26 September 2020 will need to self-isolate for 2 weeks.

Statement given yesterday on the introduction of ERMAs to support the UK's recovery and fight against the COVID-19 pandemic.

From 4am Saturday 19 September 2020, people arriving in England from Thailand and Singapore will not need to self-isolate for 2 weeks.

Latest round of T-TRIG funding is open to entrepreneurs and innovators looking to create a better transport system.

Supercharging the future of driving this #WorldEVDay