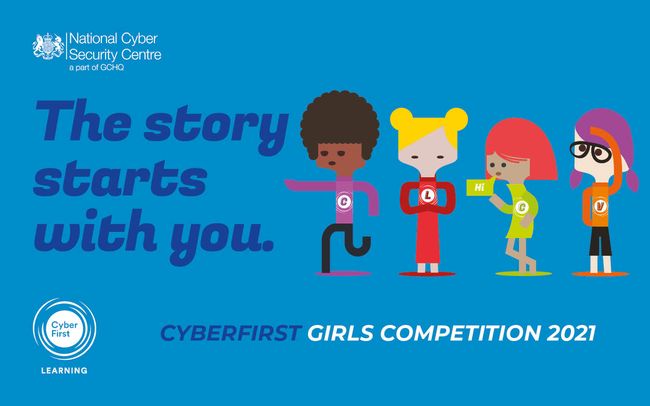 TEN teams of girls have progressed to the final of the UK’s flagship cyber security contest for schools after hard-fought virtual competitions took place the length and breadth of the country.

The successful girls were among hundreds aged 12 to 13 who put their cyber security know-how to the test in the semi-finals of the CyberFirst Girls Competition, run by the National Cyber Security Centre (NCSC), a part of GCHQ.

And having proved themselves champions for their region or country, they will now go on to compete against each other in teams of four for the ultimate prize in the UK Grand Final in April, having seen off thousands of rivals already.

The semi-finals were held online in Northern Ireland, Scotland, Wales and five English regions, and saw more than 120 teams simultaneously take on a series of cyber security puzzles covering cryptography, logic and networking.

Now in its fifth year, the CyberFirst Girls Competition aims to inspire girls to pursue their interests in technology and consider a career in cyber security – a field where women are still under-represented in the UK, making up an estimated 15% of the sector workforce.

“Congratulations to all those who reached the CyberFirst Girls semi-finals, and a special well done to those teams now going through to the Grand Final.

“It’s inspiring to see girls up and down the country engaging in the competition with such enthusiasm and skill, and we hope many will consider taking their interest in cyber security further.

“By offering girls the opportunity to develop new skills, the CyberFirst Girls Competition plays an important role in improving gender diversity in cyber security, and thanks to support from teachers and industry partners, it continues to be a great success.”

“Well done to everyone who made it to this far in the competition - it is great to see girls across the country taking part and putting their cyber skills to the test.

“It is important we inspire the next generation of cyber defenders to consider a career in cyber security and continue building a strong pipeline of diverse talent to protect people and businesses for years to come.”

More than 6,500 girls from more than 600 schools entered the online qualifying round for this year’s CyberFirst Girls Competition when it opened in January.

The highest scoring team from each event, along with two high-scoring wildcard teams, will now progress to the Grand Final taking place on Monday 26 April virtually.

The 40 finalists will face new tasks testing their understanding of cyber security and putting the skills they have developed during the competition into practice. Each team will also receive a drop crate, containing tech equipment and physical challenges, to help them complete the puzzles.

The NCSC and ICO share joint letter with the Law Society after increases in ransomware payments.