Nanoco is using expertise in nanomaterials for use in displays and lighting to develop better ways of detecting and treating deadly forms of cancer.

A University of Manchester spin-out is developing nanomaterials known for their use in lighting and solar energy into new fluorescent biomarkers that could detect and improve treatment of some of the deadliest forms of cancer.

According to the Pancreatic Cancer Research Fund, 10,000 people are diagnosed with the disease each year in the UK and it is the fifth most common cause of cancer deaths. It has the lowest survival rate of all cancers, with only 3% of those diagnosed surviving more than 5 years.

Nanoco is working with Professor Sandy MacRobert and researchers at University College London on its pancreatic cancer project. This innovation could help with better diagnosis and treatment.

Quantum dots can guide the physician

Quantum dots are made from a semiconductor material and are about 10,000 times smaller than the thickness of a human hair. They have traditionally been made of toxic materials and used in products such as television screen displays.

Nanoco has developed a way of making quantum dots from non-toxic materials and is investigating how its bio-compatible type of quantum dots, VIVODOTS™ nanoparticles, could be used as fluorescent biomarkers, with the support of funding from Innovate UK. 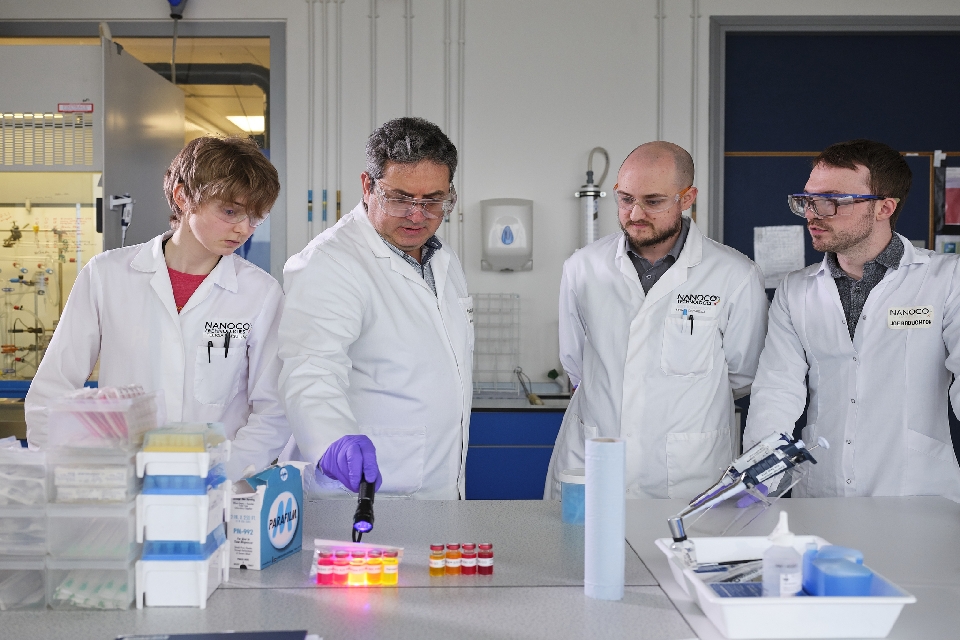 Quantum dots are fluorescent so, if you hit them with energy, they emit different wavelengths of light. They work in the same way that fireflies do in nature.

Their properties make them attractive for many uses. Because they are very stable, bright and don’t photobleach they can be used for real-time imaging of targeted tissue. We can make them bind to a tumour, for example.

A surgeon can use them for image-guided surgery. Other applications could be tracking of stem cells in the body after injection to see if they reach targeted tissues.

Nanoco is focusing its efforts on image-guided surgery for pancreatic cancer and on early detection and simplified diagnosis of skin cancers. It is carrying out pre-clinical safety tests.

In our skin cancer project, we are aiming to show that our VIVODOTS™ nanoparticles will work more effectively than current state-of-the-art methods.

It currently takes 3 months to rule whether a lesion is malignant or not and this has a big burden on the medical system. GPs can’t make quick decisions, they have to take samples and send them away. The stress imposed on the patient is huge.

We think we can create something like a cream that can be applied so a GP can get an answer in one or 2 days instead of 3 months. Three months is a long time so we expect a better outcome for patients too.

The aim is to link VIVODOTS™ nanoparticles with antibodies and inject them into the patient. This will help to identify cancerous cells during endoscopies, allow image-guided surgery and ensure the killing of any remaining cells left after surgery.

The company was spun out of the University of Manchester by its chief technology officer Nigel Pickett in 2001. It is now quoted on the main market of the London Stock Exchange.

It specialises in the research, development and large-scale manufacture of heavy-metal-free quantum dots and semiconductor nanoparticles for use in displays, lighting, solar energy and bio-imaging.

The company is just finishing its early pre-clinical safety studies and has yet to test its technology in humans. It could take 5-7 years to develop it fully for use in hospitals and GP surgeries.

Imad added: > Innovate UK funding is helping to accelerate development at this early stage and to ensure a smooth translational phase so that the technology is attractive to big pharma and venture capital.

The company has received funding support from Innovate UK, the Medical Research Council, Engineering and Physical Sciences Research Council and the Science and Technology Facilities Council since 2011.

Indro Mukerjee appointed as new CEO of Innovate UK to help develop the UK's innovation capability and drive investment in research and development.

Dstl and DASA will be speaking at Innovate Local: Southern Pioneers on 8 to 9 March 2021.

Businesses can now find Innovate UK stories about new initiatives and funding on the UKRI website.

Investing in foundation industries: help to back innovators

Investors can join a programme to support businesses carrying out innovative projects that aim to reduce resources and energy use in key industries.

Universities and researchers can apply for a share of £2 million to work with researchers and businesses in Africa on solving challenges in food supply.