The CyberFirst Girls Competition's finals will take place across the UK. 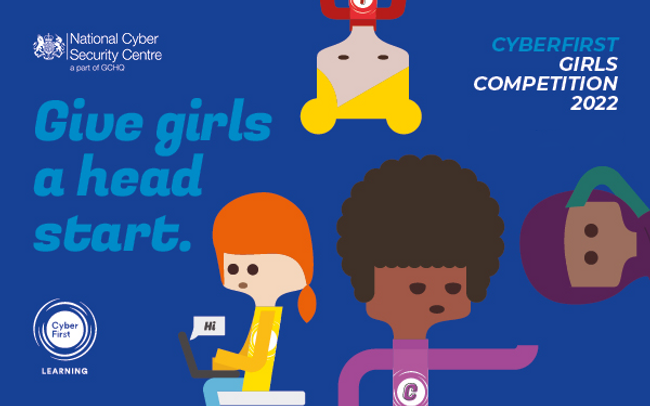 SCHOOLGIRLS across the UK are preparing to put their digital skills to the test this week in a bid to be crowned cyber security champions.

More than 130 schools will compete across 13 home nation and regional finals in the culmination of this year’s CyberFirst Girls Competition, run by the National Cyber Security Centre (NCSC) – a part of GCHQ.

The finalists, aged 12 to 13, will work in teams to tackle cyber-related puzzles covering topics from networking and AI to cryptography and logic in a bid to score the most points. In-person finals will be held on Saturday 5th February, with some finals being held virtually earlier on Wednesday.

The 2022 competition introduced a new format aimed at encouraging new entrants from every part of the country. Hundreds of schools signed up this year, with state schools that had never entered before making up more than 25% of the total. This contributed to an overall increase in the proportion of state schools compared with last year.

Now in its sixth year, the CyberFirst Girls Competition aims to inspire girls to consider pursuing careers in cyber security as female representation in the sector is too low, with women accounting for just 16% of the UK’s cyber workforce.

“Best of luck to all the girls taking part in this year’s finals of the CyberFirst Girls Competition – it’s a fantastic achievement and they are great cyber ambassadors for the country.

“The UK’s growing cyber security industry needs more female representation so it’s great to see thousands of girls taking part in the competition, many for the first time.

“I thank schools and industry for their work helping us uncover new cyber talent and I hope for many of the girls this will be just the start of their interest in this area.”

Steve Barclay, the Chancellor of the Duchy of Lancaster, yesterday said:

"We’re facing greater threats to our cyber space than ever before and our defence is underpinned by people with the right skills and training. However, the sector is still far too male dominated.

“The CyberFirst Girls Competition is driving change by allowing girls to unlock and discover the exciting and important world of cyber security and its endless career pathways.

“Good luck to all of this year's finalists across the UK - I’ll be watching with interest!”

More than 7,000 pupils took part in this year’s competition – overtaking last year’s total – and adding to the tens of thousands of girls who have entered since the contest launched in 2017.

The CyberFirst Girls Competition is the NCSC’s flagship cyber security contest for schools, which opens annually to girls in Year 8 in England and Wales, S2 in Scotland, and Year 9 in Northern Ireland.

This year’s competition format has involved some new changes, with 13 finals being held across the UK – rather than one UK event – so more local cyber talent can be celebrated in the final round.

The finalists are the highest scoring teams from the first round that took place in December, and finals are being held for each of Scotland, Wales, Northern Ireland and English regions.

The winners will be announced via the NCSC’s social media at around 15:00 for each final. They will receive laptops as part of their prize, along with an invitation to a celebration event later in the year.

The CyberFirst programme offers a range of free opportunities aimed at offering young people the skills, opportunities and exposure they need to thrive in cyber security.